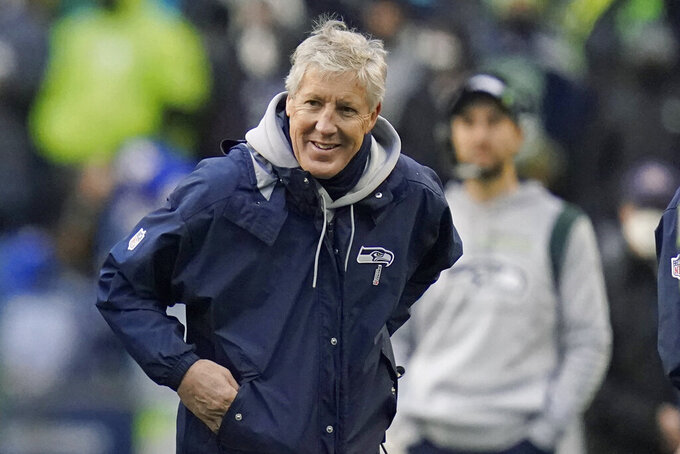 Seattle Seahawks head coach Pete Carroll smiles on the sideline during the second half of an NFL football game against the Detroit Lions, Sunday, Jan. 2, 2022, in Seattle. (AP Photo/Elaine Thompson)

BETTING LINE: Cardinals by 6 1/2, according to FanDuel SportsBook.

TURNOVER DIFFERENTIAL: Seahawks plus-6; Cardinals plus-11.

SEAHAWKS PLAYER TO WATCH: This is the last chance for RB Rashaad Penny to make an impression on the rest of the NFL in a meaningful game before hitting free agency in the offseason. No running back has been more productive in the league since Week 14 than Penny, rolling up 481 yards rushing during that stretch, including a career-best 170 last week against Detroit. Arizona is 11th in the league against the run so this will be one of the better tests Penny has faced.

CARDINALS PLAYER TO WATCH: The offense has received much-needed help from WR Antoine Wesley, who has caught three touchdowns over the past two games, including two against the Cowboys last week. Wesley played for current Cardinals coach Kliff Kingsbury when both were at Texas Tech and the two were reunited when Kingsbury gave the 6-foot-4, 206-pound his first NFL playing time.

KEY MATCHUP: The Cardinals' defense must try to stop another quality back in Penny, who has thrived over the past few weeks. Arizona's success stopping the run has been up-and-down throughout the season, but the unit was very good against the Cowboys and Ezekiel Elliott last week, holding him to 16 yards.

SERIES NOTES: The Seahawks have dropped three of their past four games against the Cardinals, including a 23-13 setback earlier this season. In that game, Arizona backup quarterback Colt McCoy had one of the best games of his career in place of injured starter Kyler Murray, completing 35 of 44 passes for 328 yards and two touchdowns.

STATS AND STUFF: Arizona is trying for its first season sweep over Seattle since 2009. ... If the Cardinals beat the Seahawks and the 49ers beat the Rams, the Cardinals will win the NFC West for the first time since 2015. Arizona is currently the No. 5 seed in the NFC playoff field but could jump to No. 2 depending on this weekend's results. ... The Seahawks scored on nine straight possessions last week against Detroit for the first time in franchise history. It was the first time this season anyone in the league scored on nine consecutive offensive possessions. ... Seattle is second in the league in yards per rushing attempt at 3.8. Only New Orleans at 3.7 yards per attempt is better. ... LB Jordyn Brooks has 165 tackles and trails Wagner by five for most on the team this season. Wagner ranks second in the league and Brooks is third. ... WR DK Metcalf needs 91 yards receiving to reach 1,000 for a second straight season. Metcalf needs one TD catch to reach 30 in his first three seasons combined. ... QB Russell Wilson can pass Peyton Manning for the most wins in a QBs first 10 seasons -- regular and postseason -- with a victory. Both have 113. ... With 125 yards passing, Wilson can also join Manning as the only QBs with 3,000 yards passing and 20 TDs in each of their first 10 seasons. ... The Cardinals have a 9-2 record this season when center Rodney Hudson plays and are 2-3 when he doesn't because of injury or illness. The three-time Pro Bowl selection is expected to play Sunday. ... Cardinals edge rusher Chandler Jones has 16 1/2 sacks in 11 career games against the Seahawks. ... The Cardinals have a 3-4 record at home this season and finished 8-1 on the road.