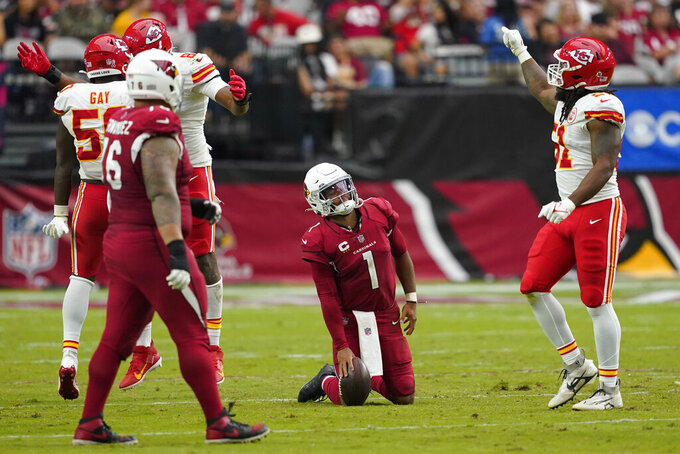 TURNOVER DIFFERENTIAL: Cardinals plus-1; Raiders minus-3.

CARDINALS PLAYER TO WATCH: Arizona handed LB Isaiah Simmons the keys to the defense this season, giving him the green dot, which means he’s the man who relays plays and positioning from defensive coordinator Vance Joseph to the other 10 guys on the field. In Week 1, it didn’t go great. Several players said communication was a problem in the loss to the Chiefs. Simmons will need to be much better — verbally and physically — against the Raiders.

RAIDERS PLAYER TO WATCH: DE Chandler Jones. Las Vegas' big offseason addition on defense gets to face his former team in Week 2. Jones had a franchise-record 71 1/2 sacks in six seasons with the Cardinals. Jones' 107 1/2 sacks since entering the NFL in 2012 are the most in the league in that span.

KEY MATCHUP: Cardinals secondary vs. Raiders WR Davante Adams. After getting picked apart by Patrick Mahomes against the Chiefs in the opener, the Arizona DBs figure to have their hands full with Adams. Adams had 10 catches for 141 yards and a touchdown in his Raiders debut, getting targeted a league-high 17 times.

SERIES NOTES: The franchises have played only 10 times, tied for the second-most infrequent matchup among teams that were in the NFL at the time of the 1970 merger. The only matchup that happened fewer teams is Chiefs-Eagles with nine games. ... The Raiders won 23-21 in Arizona in 2018 on a walkoff field goal by Daniel Carlson. That loss was the difference in Cardinals getting the No. 1 pick in 2019 (Kyler Murray) and the Raiders getting the fourth pick (Clelin Ferrell).

STATS AND STUFF: The Cardinals have lost six of seven games, including the playoffs, going back to last season. ... Arizona is 12-5 on the road over the past two seasons. Only Kansas City, New Orleans and Tampa Bay have a higher road winning percentage during that span. ... Cardinals C Rodney Hudson faces his old team where he played six seasons. Hudson started at center in all 92 games he played with the Raiders. He went to the Pro Bowl three times. ... RB James Conner has scored 19 touchdowns in 16 career games with the Cardinals. ... QB Kyler Murray is looking for his first win with the Cardinals since signing a $230.5 million, five-year contract during the offseason. ... Three-time All-Pro WR DeAndre Hopkins is in the midst of a six-game suspension for violating the NFL’s policy on performance-enhancing drugs. ... The Cardinals allowed the Chiefs to gain a first down on 33 of 66 offensive plays in Week 1. ... The Raiders are 16-11 (.593) in Week 2 since the merger after losing the opener, the fifth best winning percentage in the NFL. ... The Raiders last started 0-2 in 2018 in Jon Gruden's first season back as coach. ... Las Vegas QB Derek Carr is coming off his third career game with three INTs. The last one came in the 2018 opener. ... Carr was the fourth Raiders QB in the past 30 years to throw at least three INTs and get sacked at least five times in the same game. ... Carlson has made 25 straight FGs, the longest active streak in the NFL. ... Raiders CB Nate Hobbs had nine tackles, a career-high two tackles for loss, a pass defensed and a forced fumble in the opener. ... Las Vegas had no sacks and no takeaways in the opener. ... Raiders DE Maxx Crosby had 10 tackles, one tackle for loss and two QB hits last week.

FANTASY TIP: WR Hunter Renfrow led the Raiders with 103 catches in 2021. But he wasn't targeted at all in the first half of the opener as Las Vegas' offense revolved around Adams. Renfrow finished with three catches on six targets for 21 yards and might not be as big a part of the Raiders offense in 2022.