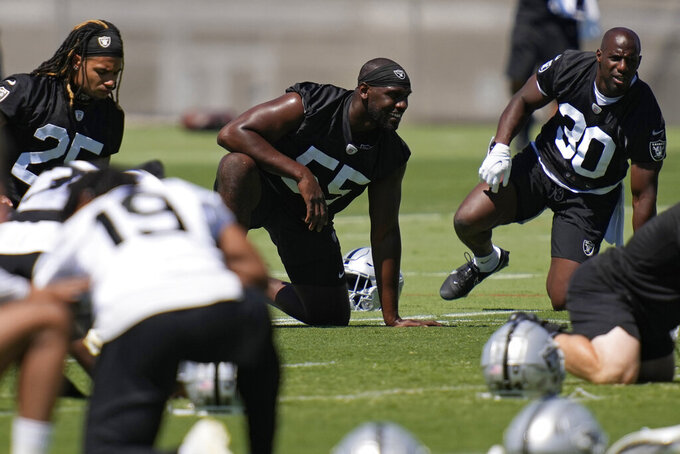 HENDERSON, Nev. (AP) — After 10 very successful years in the NFL, it would have been easy for defensive lineman Chandler Jones to step into the Las Vegas Raiders' facility with an inflated ego.

His 107 1/2 sacks over the last decade rank higher than any other player in the NFL, and he ranks second in the league to Pittsburgh’s T.J. Watt with 14 forced fumbles the last three seasons.

But bravado isn’t something you learn growing up in Endicott, New York.

Instead, a positive attitude and a heavy dose of humility have Jones fitting in nicely with his new team.

"Being humble is something I was definitely raised on, and also the culture from where I was from,” Jones said Thursday after offseason training activities. “I say it all the time that I was that kid that said, ‘Hey, when I grow up I want to be an NFL football player.’ So now that I’m 10 years in, I understand the severity of this job, but this opportunity that I had.”

An opportunity that gave Jones a chance to reunite with people he was familiar with from when he started his career in New England, including coach Josh McDaniels and defensive coordinator Pat Graham.

Jones, who spent four seasons with the Patriots and six with the Cardinals, signed a three-year, $51 million contract in March with the Raiders.

“It’s a blessing to be playing this long, but to have your dream job every day, it’s very humbling and it’s something that you want to do well and do at a high level,” said Jones. "So, that’s what I take pride in. And like I said before being consistent but just enjoying the work, enjoying football.”

With Jones playing opposite fourth-year pro Maxx Crosby, the Raiders now have two of Pro Football Focus’ top nine edge rushers from last season as they prepare for one of the toughest schedules in the league.

McDaniels said his familiarity with the four-time Pro Bowler’s pass-rushing techniques made him an easy target this offseason, an acquisition he felt would help replace Yannick Ngakoue, who was traded to the Indianapolis Colts in exchange for Rock Ya-Sin the day before Jones signed with Vegas.

“He’s got this long, levered body that it’s really hard to hit and he’s got a lot of different pass rush moves,” McDaniels said. “He’s got a great feel for the different people that are protecting, and he’s been able to play a lot of different spots across the front. ... I know he’s into his 30s, but I see Chandler as a guy that is still playing at a really high level and he’s playing at that level on all three downs."

Crosby, the second-ranked edge rusher by Pro Football Focus last season and someone who is expected to lead Las Vegas’ defensive front, said he’s enjoyed his new teammate and has looked at Jones as an immediate leader for the team.

“I’m constantly asking him questions,” Crosby said. “The cool thing about Chandler is he’s one of the most humble dudes I’ve ever met. Super humble for the things he’s done. He asks me stuff all the time and it throws me off because I look at his career and that’s something I aspire to do. You know, he’s been incredible since day one and he’s definitely somebody I look up to.”

While the 32-year-old veteran said he’s found himself trying to keep up with Crosby’s agility and youthful exuberance during the first two weeks of OTAs, defensive line coach Frank Okam said working with someone of Jones’ caliber has helped everyone.

“You can see how hard he’s running to the ball, he’s leading as an example with his effort and I think that’s the thing that is a testament to his longevity in his career and why he’s been so successful for this long amount of time,” Okam said. “I always like to pick the brain of someone who has over 100-plus sacks because it’s something that I never did in my own career, so any time you can get some lessons on how they see the game, coaching points, film study points, anything to help those young guys acclimate to the game faster, I’m all ears."