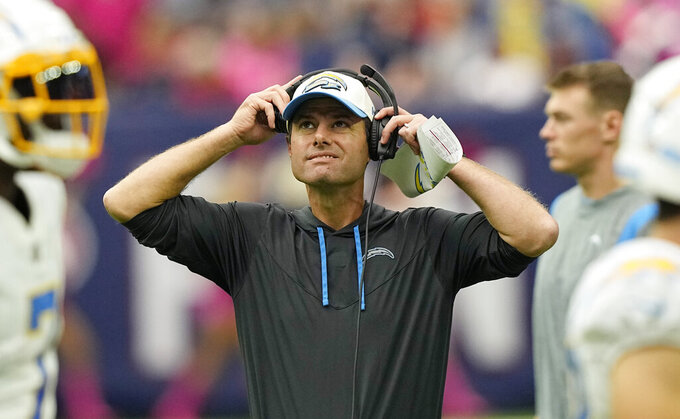 Los Angeles Chargers head coach Brandon Staley watches from the sidelines during the first half of an NFL football game against the Houston Texans, Sunday, Oct. 2, 2022, in Houston. (AP Photo/David J. Phillip)

COSTA MESA, Calif. (AP) — Keenan Allen could return for the Los Angeles Chargers on Sunday against the Seattle Seahawks despite the team's bye coming up next week.

The receiver has missed the last five games due to a hamstring injury. He is listed as questionable for the game against Seattle, but coach Brandon Staley said it will be a game-time decision.

This is the second straight week Allen has been listed as limited in all the team's practices, but he did participate in team and individual drills on Friday. Allen has not played since the first half of the Sept. 11 opener against Las Vegas, when he had four carries and 66 yards before he injured the hamstring.

Staley said having Allen participate in 11-on-11 drills was important to gage his movement and having to feel what it is like to block someone.

“We’ve come this far. Patience is a virtue. We won’t put him out there unless we know that he can go. But if there’s any apprehension, then he won’t go," Staley said.

The Chargers (4-2) have only five receivers on the 53-man roster and will be missing at least one on Sunday. Joshua Palmer was ruled out after being placed in the concussion protocol on Wednesday. He is third on the team with 26 receptions for 240 yards and a touchdown.

Michael Bandy has used up his three gameday elevations from the practice squad, meaning the Chargers would have to sign him to the active roster if they wanted him to play. Joe Reed, the team's fifth-round pick in 2020, could also be a gameday elevation if they need to make a pair of moves.

Justin Herbert didn't express any concerns despite the uncertainty of who he might be throwing to this week.

“That’s where the training camp reps come into play. You’ve been able to throw to those guys all year," he said. "You might not get a bunch of reps during the week of practice, but to have those reps and be able to trust those, rely on those guys to step in.”

Taylor Bertolet will be brought up from the practice squad for the second time this season after making all three of his field goal attempts in the Oct. 9 win at Cleveland. Bertolet was elevated when Hopkins was inactive due to a quadriceps injury.