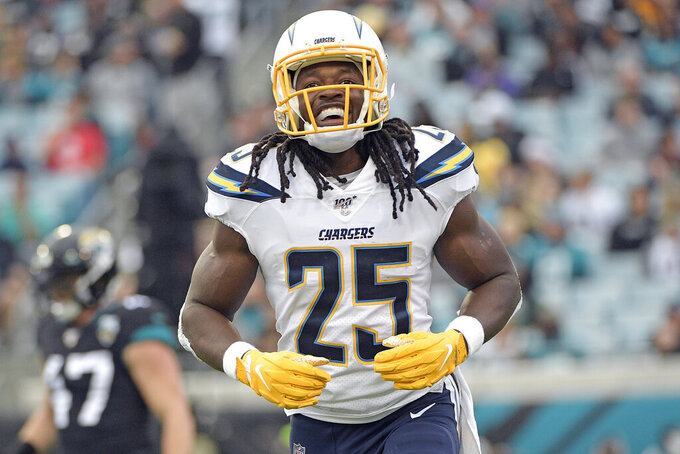 Los Angeles Chargers running back Melvin Gordon celebrates after his 1-yard touchdown run against the Jacksonville Jaguars during the first half of an NFL football game, Sunday, Dec. 8, 2019, in Jacksonville, Fla. (AP Photo/Phelan M. Ebenhack) 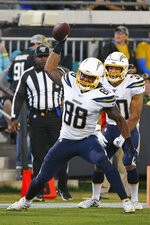 JACKSONVILLE, Fla. (AP) — Jacksonville Jaguars coach Doug Marrone sat slumped in a chair in his office, his head down and his face planted in both hands.

Marrone looked about like his team played: uninspired and ready for the season to be over.

Philip Rivers threw for 314 yards and three touchdowns on his 38th birthday, including an 84-yarder to Austin Ekeler that was the longest completion of the quarterback's 16-year NFL career, and the Los Angeles Chargers routed the Jaguars 45-10 Sunday to end a three-game skid.

Jacksonville's last two have been embarrassments at home — both essentially over by halftime.

The latest one could be the end of Marrone's tenure in Jacksonville. It's hard to imagine owner Shad Khan keeping Doug Marrone any longer, not following another lackluster effort against another sub-.500 team. The Jaguars have now dropped 19 of their last 25 games — 11 of those by double digits.

“Eventually, if you don't win enough games and they think it's better to go with someone else, then obviously that's out of my hands," Marrone said. "I just keep doing the best job I can and keep fighting.”

“A little too little, too late in terms of our postseason hopes and the expectations coming into this season,” said Rivers, whose team was officially eliminated from the postseason. "But we still talk about finishing strong. Every game matters. ... All around a good day. It was a fun day."

Marrone benched veteran quarterback Nick Foles in favor of rookie Gardner Minshew, hoping for a spark. But Minshew looked mostly ordinary, completing 24 of 37 passes for 162 yards and a touchdown. He missed DJ Chark running wide open down the left side in the second quarter.

The Chargers posted season-highs in points and yards (525).

Rivers completed 16 of 22 passes in three quarters and posted the highest QB rating of his career (154.4). He had a 30-yard TD pass to wide-open Hunter Henry, a screen pass to Ekeler that beat an all-out blitz and was the longest of his career, and a 44-yarder to Mike Williams.

Rivers now has 2,668 yards passing and 24 touchdowns in nine career starts against the Jaguars. He has 17 TD passes and an interception in his last five against Jacksonville.

Williams extended his streak to six games with at least one catch gaining more than 40 yards and found the end zone for the first time this season. It was an odd drought considering Williams had 11 touchdowns (10 receiving, one rushing) last year.

Ekeler finished with a career-high 101 yards rushing and 112 yards receiving. His 213 yards came on 12 touches. He's the second Chargers player to top the century mark rushing and receiving in the same game. The other was Lionel James in 1985.

“I thought we could have done this all year, but we were just so inconsistent it put us in a hole too many times,” Ekeler said.

Jaguars receiver DJ Chark left the locker room with a walking boot on his left foot and using a scooter. He injured his ankle in the fourth quarter. ... Backup Jaguars linebacker Jake Ryan, who spent the first 12 weeks of the season on the non-football injury list, left the game in the first half with a hamstring injury.

Chargers: Host Minnesota next Sunday. LA is 2-1 against the NFC North this season, allowing a combined 40 points against Detroit, Chicago and Green Bay.

Jaguars: Play at Oakland next Sunday, the final football game at the Oakland Coliseum. Should be a raucous crowd.