Chargers focus on stringing wins together, not Giants' QB 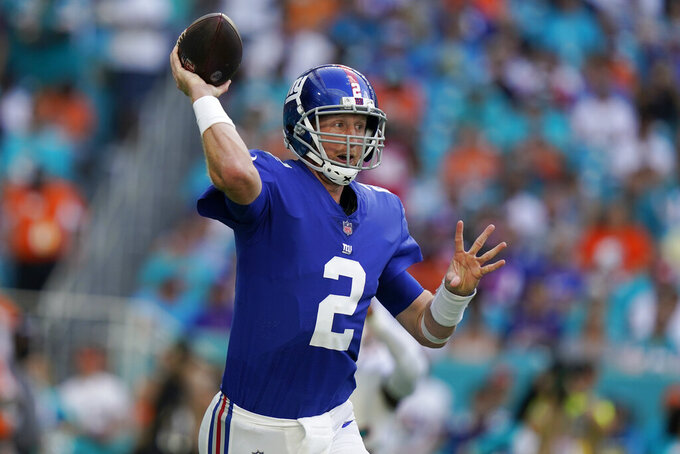 LOS ANGELES (AP) — Preparing for Mike Glennon to start at quarterback for the New York Giants isn't the biggest concern for the Los Angeles Chargers going into Sunday's game.

The Chargers (7-5) are in the thick of the AFC playoff race, but continue to struggle with consistency. They haven't won consecutive games since a three-game winning streak in October, which was part of a 4-1 start.

Los Angeles comes in with plenty of momentum after a 41-22 victory at Cincinnati. The win was the first this season in which the Chargers got contributions from all three units.

The Giants (4-8) have dropped two of their past three and will be without starting quarterback Daniel Jones for a second straight week. Jones suffered a neck injury on Nov. 28 against the Philadelphia Eagles but finished the game.

Backup Glennon got the start in last Sunday's loss at Miami and was diagnosed with a concussion after the game. His status was uncertain until Friday, when he practiced fully and was cleared to play.

That settled one thing for the Chargers. They were preparing for either Glennon or Jake Fromm, who had never taken a snap in a regular-season game. He was signed off Buffalo's practice squad early last week.

Glennon, who is with his sixth team, has made 28 starts in eight seasons.

Chargers coach Brandon Staley is familiar with Glennon since both were with Chicago in 2018.

“They’ve had a change in coordinators (from Jason Garrett to Freddie Kitchens), and then you’re also prepared for all the other people that can play quarterback," Staley said. "It’s all hands on deck, but I think, from a preparation standpoint, all you can do is assess the styles of the quarterbacks, assess the change since the play caller change, and then go from there.”

The Chargers have a four-game winning streak in the series. Big Blue has not defeated the Bolts since 1998.

The Chargers' defense had four turnovers and six quarterback sacks last week. The league's 31st-ranked run defense has also come around, allowing fewer than 4 yards per carry in three of the past four games.

“I feel like we’ve been improving each and every game since the beginning of the season. I told you guys after the bye that I felt like, in the run game, our guys are a lot more confident in their technique and their assignments," Staley said. "We’re going to just continue to stay at it, keep fighting hard to improve. There’s still a lot of ball left. There’s still a lot that we can improve on, as you guys saw yesterday.”

The one area where the Chargers continue to struggle, though, is getting off the field on third downs as their opponents are converting at a 49% rate, which is second highest in the league.

One big misnomer about the Chargers' passing game this season is that they are not throwing deep as much. Justin Herbert has 17 completions on passes in the air of 20 yards or more through 12 games compared to 21 all of last season. Herbert's 41.5% completion rate is also better than last year's 36.2% rate.

“We believe really highly in the guys we have. It helps our offense so much to get those big chunks. It’s a huge momentum shift so it’s awesome to see,” Herbert said.

Whether or not Herbert will have most of his receiving group on Sunday remains to be seen. Keenan Allen, tied for second in the league with 86 receptions, tested positive for COVID-19 on Monday and is out. Mike Williams is in league protocols as a close contact. Allen needs two negative tests in a 24-hour period, while Williams can come off the list Saturday if he has no symptoms and has tested negative five straight days.

After being held to season lows in points, total yards and time of possession, Judge fired Garrett and replaced him with senior offensive assistant Kitchens, the former Cleveland Browns coach. It was supposed to wake up the injury-hampered offense.

Things have not gone according to plan. In the two games in which Kitchens has called the plays, the offense has combined for 22 points in a win over the Eagles and a loss to the Dolphins.

New York did not score a touchdown in the 20-9 loss to the Dolphins last week and only had one in the 13-7 win over Philadelphia. The total offense in the past two games is 264 yards.

What has changed is Kitchens has been having the quarterback throw the ball quicker, with a number of tight end and flanker screens. He gave the running game more carries last week with the offense gaining 91 yards using a combination of Saquon Barkley and Devontae Booker. Look for more of that to keep the pressure off whomever is the quarterback.

The Giants came into the season expecting coordinator Pat Graham’s group to carry the team. The unit struggled early, but it found itself in the middle of October, when it limited the Panthers to three points.

Over the past five games, it has allowed 20 or fewer points in every game.

Second-year safety Xavier McKinney is an emerging star. He has five interceptions, including one he returned for a touchdown against the Raiders.

Until being blanked last week, the defense had a streak of 13 consecutive games forcing at least one turnover, and a run of eight straight games with an interception.

If the defense plays that well against the Chargers, New York would have a chance no matter who starts at quarterback.