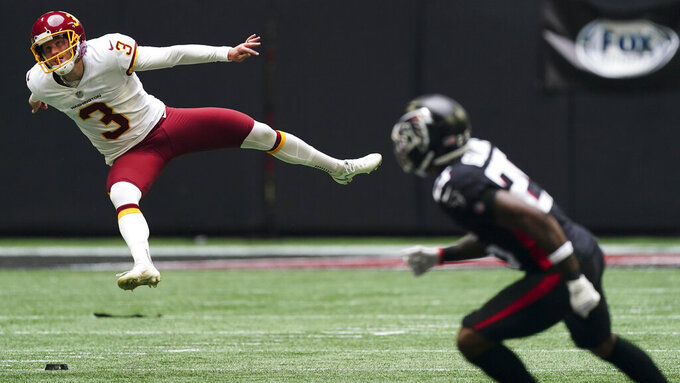 Hopkins was released by Washington on Oct. 20 after seven seasons. He was 12 of 14 on field goals and 10 of 12 on extra points through six games. Hopkins has made 84% of his field-goal attempts during his career and was Washington's leader in field goal rate.

Hopkins joins Justin Tucker and Greg Zuerlein as the only three kickers to make more than 145 field goals from inside of 50 yards over the past seven seasons.

Vizcaino won a kicking competition with Michael Badgley during the preseason, but struggled during his six games. He missed five extra points, becoming the first kicker since Minnesota's Fred Cox in 1974 to miss that many in a team's first six games.

Coach Brandon Staley said on Monday that he still had a lot of confidence in Vizcaino, but that the team needed to keep its options open.

“We had a good chance to evaluate him and where we’re at with the kicking situation, both in field goals and on kickoff. I think that we’ve learned a lot about his game," Staley said. "I still believe in my heart, that this guy has real talent. ... At the same time, we’re going to make sure that we keep all of our options open at that position.”

Kicking has been an area of frequent change for the Chargers. Hopkins will be the 11th kicker to suit up for Los Angeles since 2017 when it faces New England on Sunday.