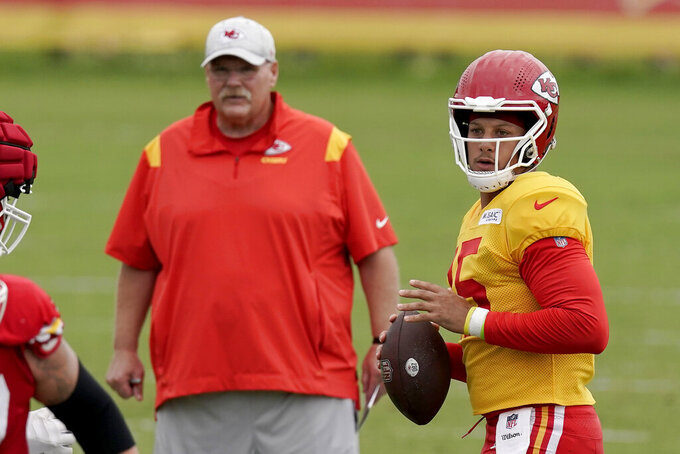 KANSAS CITY, Mo. (AP) — Every season without fail, when the Chiefs get a week off from their 17-game regular-season NFL grind, Kansas City coach Andy Reid gets asked to explain his 20-3 record when his teams are coming off a bye.

And every season without fail, Reid finds a way to answer the question without ever really answering it.

Turns out the same goes for his record in season openers.

The Chiefs head into their game at Arizona on Sunday having won seven consecutive openers, including three against teams that were destined for the playoffs and one that reached the Super Bowl. And overall, Reid is 8-1 since taking over the Chiefs before the 2013 season, including a perfect mark in five openers played on the road.

“I don't know,” Reid said Wednesday amid another round of verbal shoulder-shrugging. “I appreciate the question, but right now, I don't care about any of that. We just go execute and do the best we can this time of year.”

The reality is the Chiefs simply do that better than everybody else.

Take turnovers, which tend to pop up most among the unprepared. The Chiefs have not committed one in their last four openers, while their own defense has taken the ball away seven times over that span, and the last time they coughed it up — at New England in 2017 — they atoned for the miscue by piling up 537 yards of total offense.

In fact, the Chiefs are plus-6 in turnover margin in their nine openers under Reid, and that number would be even more remarkable if not for three turnovers in their opening loss in Tennessee to start the 2014 season.

Only two of their last seven season-opening wins have been by less than a touchdown.

It helps to have Patrick Mahomes under center.

The Chiefs quarterback has completed better than 71% of his passes in openers over the past four years, averaging more than 295 yards per game, and has thrown 13 touchdown passes without a single interception.

“We've put in the practice. We've put in the work,” Mahomes said, “and I'm excited to see these guys in game action. The preseason is one thing, but when you get to the regular season, you want to get out there and show what you can do.”

Everybody around the league has put in the work, though; all teams desire to start 1-0 every bit as much as the Chiefs.

So the question remains: What makes Reid and his bunch nearly unstoppable in Week 1?

“It's all about the preparation with Andy, year-in and year-out,” Chiefs defensive tackle Chris Jones said. “Training camp is extremely tough and I think that translates to game week. The way he prepares us to be physically and mentally ready for when the season approaches, I think it's beneficial for us as a team.”

It probably doesn't feel like that in camp, when Reid insists the Chiefs uproot from their training base in Kansas City for three weeks of dorm life on a college campus. It's there that Reid and his lieutenants push their players through sweltering late-summer practices with a decidedly old-school mentality designed to foster comradery and toughness.

“Bonding becomes important and you bond when you've got to do something tough,” Reid said. “I know some of them were hurting but they got up and they pushed through. That foundation will pay off for them down the road here.”

NOTES: The Chiefs placed TE Blake Bell (hip) on injured reserve this week. Everyone else on the roster practiced Wednesday, including DE Carlos Dunlap (Achilles inflammation), WR JuJu Smith-Schuster (knee) and CB Rashad Fenton (groin). ... Smith-Schuster said he feels “100% healthy” after missing most of last season with an injury, then missing a good portion of camp with his sore knee. “Can't wait to play,” he said. “It's going to be a fun one.”