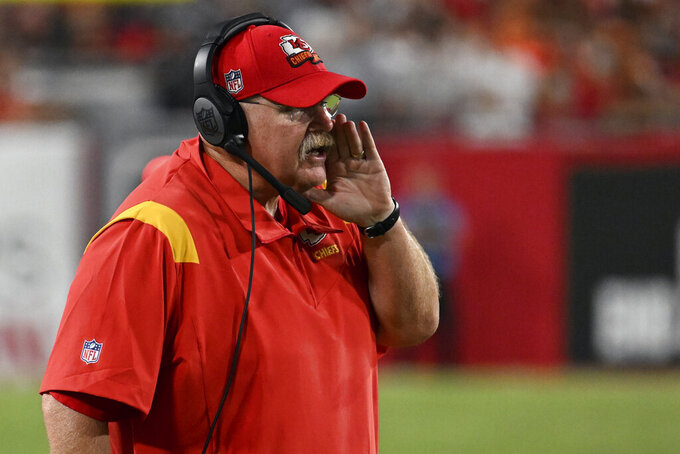 The Kansas City Chiefs could be missing kicker Harrison Butker for the fourth consecutive game because of swelling that won't abate in the left ankle that he sprained in the opener against the Arizona Cardinals.

The Chiefs used Matt Ammendola as a fill-in for Butker for the first two games of his absence, but he was released after missing a field goal and an extra point against Indianapolis.

Matthew Wright was signed as insurance last week and was perfect on extra points while hitting both of his field goals in a win at Tampa Bay.

“Normally the sprained ankles don't last,” Chiefs coach Andy Reid said Thursday, “but he's got some swelling in there that he's just got to get out, and that's where we're at right now. It's not that he doesn't want to play. He wants to get out there.”

Butker kicked sparingly last week, but was sore afterward, and the Chiefs played it safe by using Wright in their game at Tampa Bay. He hasn't kicked at all as they prepare to face the Las Vegas Raiders on Monday night.

In other injury news, first-round pick Trent McDuffie appears close to returning from the hamstring injury that he sustained in Week 1. The defensive back has been on injured reserve and is eligible to return after this week's game.

“He's doing great,” Reid said. "I think he'll get back in there maybe next week."

The Chiefs also have tight end Blake Bell on injured reserve, though he doesn't appear to be close to returning after surgery for a hip injury.

Right tackle Lucas Niang, who has been on the physically unable to perform list, has been taking some steps toward returning, though Reid said that “he's close but not quite there yet.”

Defensive end Mike Danna could return Monday night after missing the past two games with a calf injury.

Meanwhile, Chiefs linebacker Willie Gay Jr. returned to the facility for the first time since the NFL gave him a four-game suspension for an off-the-field altercation earlier this year. He still must sit two more games, but league rules allow him to return to the practice facility after the first two weeks of the suspension.