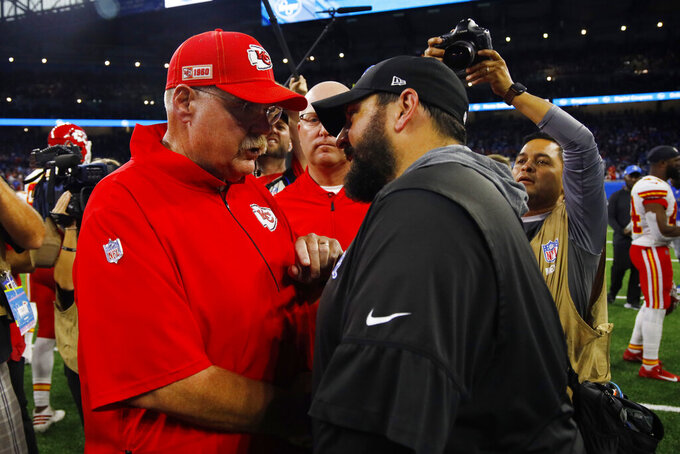 KANSAS CITY, Mo. (AP) — Patrick Mahomes resembled a pitcher without his best stuff Sunday, a fraction of an inch off on so many of his throws but hanging in there long enough to give his team a chance.

He was a golfer just a little bit off but continually saving par.

It turned out to be just enough.

Leaning on his impressive cast of cohorts, the Chiefs quarterback calmly rallied his team in the final minute Sunday, setting up Darrel Williams' short touchdown plunge and giving Kansas City a 34-30 victory in Detroit that kept the three-time and defending AFC West champions unbeaten.

Mahomes was just 24 of 42 for a paltry-by-his-standards 315 yards, and his streak of games with a touchdown throw came to an end. But the reigning league MVP found a way to win.

"It was pretty cool," Chiefs safety Tyrann Mathieu said. "Like I've said, any time you got a quarterback that doesn't necessarily look at the scoreboard, always feels like he's in it even when he may not be having the best day, you have a chance."

Indeed, there was a lot of adversity for the Chiefs (4-0) to overcome Sunday.

They were still without star wide receiver Tyreek Hill, running back Damien Williams and left tackle Eric Fisher because of injuries. They fumbled the ball away three times. They were just 3 of 5 in the red zone, and normally reliable kicker Harrison Butker missed a field-goal attempt.

"The best part of it is the guys never doubted one another, or themselves, for whatever the case might be," Chiefs coach Andy Reid said Monday. "They picked the guys up that had the turnovers and we were able to rally around it. Defense made some stops, offense made some plays. It worked out OK. But you know, there was a good feeling on the sideline. There was an emotional feeling we were all in."

The defense is still adjusting to new coordinator Steve Spagnuolo's system, but it is starting to make progress. It gave up plenty of yards — Matt Stafford threw for 291 and three TDs and Kerryon Johnson ran for 125 — but also made crucial plays. Kansas City had four sacks and eight tackles for a loss, recovered two fumbles and watched Bashaud Breeland return one 100 yards for a touchdown.

Rarely do the Chiefs lament special teams under coordinator Dave Toub, who is considered one of the best in the business. But whether it was Butker's miss, penalties and missed assignments or their struggles in the punt return game, the Chiefs' special teams were underwhelming.

CB Morris Claiborne. He was forced to sit out the first four weeks for violating the NFL's policy on substance abuse, but has been practicing with the Chiefs and is now ready to play. The former sixth overall pick of the Cowboys is coming off the best two-year stretch of his career with the Jets, and he should improve a position of considerable need for a team with Super Bowl aspirations.

CB Charvarius Ward. He's been serviceable opposite Breeland in the defensive backfield, but he's also given up far too many big plays. Claiborne's return from suspension likely means Ward returns to the sideline, though his experience the first four weeks makes him a useful backup.

DE Alex Okafor got his first sack with the Chiefs on Sunday before leaving in the fourth quarter with a hip injury. LB Damien Wilson left late in the game to be evaluated for a concussion, but Reid said he was cleared and could have returned to the game. Tyreek Hill ran routes before the game in Detroit, but he's likely a couple of weeks from returning from his collarbone injury.

22. That's the number of consecutive games in which the Chiefs have scored at least 26 points, extending their NFL record. Denver had the longest streak at 19 games from the 2012-13 seasons.

The Chiefs play four of their next five at home beginning with Sunday night's visit from the Colts. It's also the first of three primetime games in the next four weeks, which includes a Thursday night trip to Denver and a Sunday night showdown with Green Bay.