Chiefs get Jones, Hardman back as camp returns to KC 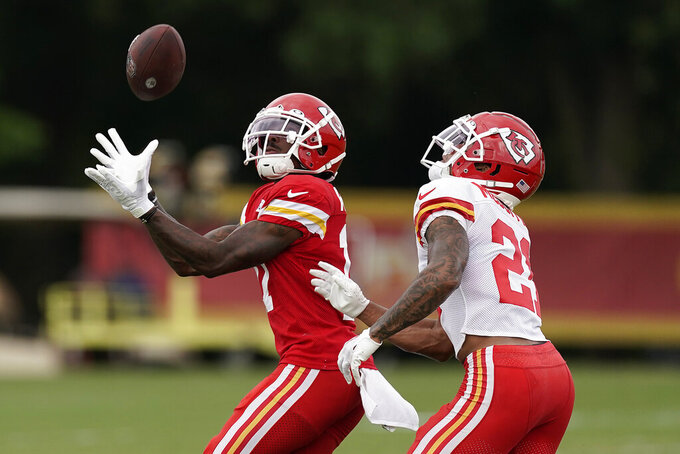 KANSAS CITY, Mo. (AP) — Pro Bowl defensive tackle Chris Jones and wide receiver Mecole Hardman returned to practice with the Kansas City Chiefs on Monday, when they moved their training camp base from Missouri Western back to their own facility.

Jones had been dealing with a back injury and Hardman had been out with a sore groin.

There were still six players that did not practice during the first of two workouts before the Chiefs play their preseason finale Thursday night against Green Bay. Tight end Blake Bell is nursing a hip injury, defensive Carlos Dunlap a sore Achilles tendon, running back Derrick Gore a thumb injury, wide receiver JuJu Smith-Schuster a sore knee and cornerback Rashad Fenton a groin injury. Offensive tackle Lucas Niang remains on the PUP list after knee surgery.

The Chiefs also began to pare down their roster to the 80-man limit ahead of Tuesday's deadline, waiving cornerbacks Nasir Greer and Brandon Dandridge along with offensive lineman David Steinmetz. That leaves them at 82 players.