Chiefs hope turnaround has begun with Packers on horizon 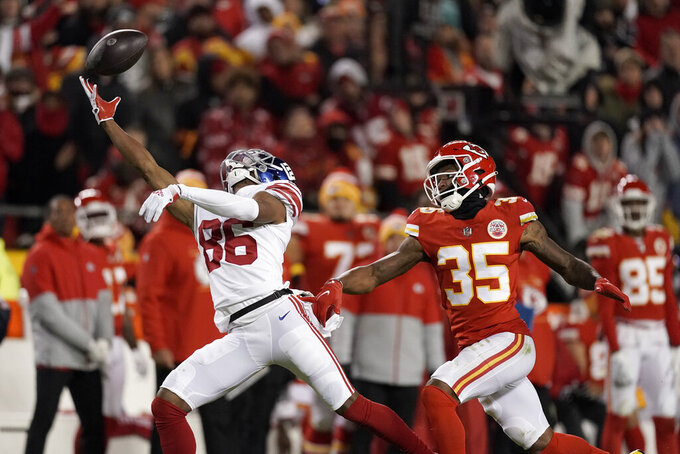 KANSAS CITY, Mo. (AP) — There was a moment early in the second half of Monday night's game against the New York Giants when Chiefs quarterback Patrick Mahomes saw the familiar sight of No. 10 streaking wide open down the middle of the field.

Mahomes might have released the ball a split second too late. Or perhaps he underthrew it just a bit.

Regardless, the ball bounced off the defender for an incomplete pass, rather than land in the outstretched hands of Tyreek Hill.

And while the big-play misfire didn't ultimately end up costing Kansas City in a come-from-behind 20-17 victory inside rainy Arrowhead Stadium, it did seem to neatly summarize the first eight weeks of the regular season.

The Chiefs (4-4) are still ridiculously talented. They're just missing their usual high-octane rhythm by oh-so-much.

“You only have a few deep shots. You have to make sure you execute them,” Mahomes said afterward. “Defenses have had safeties 25 yards deep on us. Whenever you get those opportunities, you have to execute on them.”

That's not where the problems with execution end.

The Chiefs also committed 12 penalties for 103 yards, committed two more turnovers to run their total to 19 — more than any other season under Andy Reid — and needed two fourth-quarter field goals from Harrison Butker just to survive.

“I say it all the time. If we have guys open, if I throw and hit the right spot, we can move it against just about any coverage,” Mahomes said. “We have answers for everything. But there are times we stall out or don't execute or I throw the ball and don't hit the right spot, or penalties — I know week after week it's been showing up, but I'm sure we'll find a way to snap out of it. And when we do, we'll be a tough offense to stop.”

Now would be a good time. The Chiefs are still facing an uphill climb in the AFC West and have the Green Bay Packers coming to town Sunday for what some thought could be a Super Bowl preview before the season began.

The Packers have lived up to their end of the bargain. The Chiefs are still trying to do the same.

“They don't just give these away. That other team is coming after you," Reid said, “and you're going to get your best shot.”

One of the NFL's worst defenses through seven games is finally waking up. The Chiefs sacked the Giants' Daniel Jones three times and picked him off once, and they limited New York to 4 of 12 on third down and 300 total yards.

“Everyone has a sense of urgency,” Chiefs defensive tackle Chris Jones said. “We know what we have in this building.”

The Chiefs are still searching for someone to take the heat off Travis Kelce and Tyreek Hill. Kelce was blanked until late in the fourth quarter while Hill managed 12 catches for 94 yards and a score. But other than Mecole Hardman, who did most of his damage on screen passes, the Chiefs didn't get much downfield production. Demarcus Robinson and Byron Pringle were the only other wide receivers to catch a pass: one apiece.

Running back Derrick Gore took advantage of his first real NFL opportunity to run 11 times for 48 yards and his first career score Monday night. He provided a nice change of pace to Darrel Williams, who's been the lead back with Clyde Edwards-Helaire on injured reserve. Williams added 13 carries for 49 yards against the Giants.

Daniel Sorensen's stock couldn't fall much further. After starting earlier in the season, the safety was relegated to spot duty in favor of Juan Thornhill, but he still had two big gaffes Monday night. The first resulted in a 50-yard catch by John Ross III during a touchdown drive and the second came on tight end Evan Engram's TD catch.

10 — Nobody would have pegged Mahomes to be leading the league with that many interceptions this season, but they add up when you throw at least one in seven straight games. As a team, the Chiefs have four straight multi-turnover games.

Chiefs linebacker Anthony Hitchens (triceps) and defensive tackle Khalen Saunders (knee) missed the game against the Giants, but otherwise the team is mostly healthy. That's good news with the bye week still to come this season.

The Chiefs play the Packers (7-1) on Sunday before a trip to Las Vegas. Then comes three more home games against the Cowboys, Broncos and Raiders that should give Kansas City an opportunity to make a move in the AFC West.