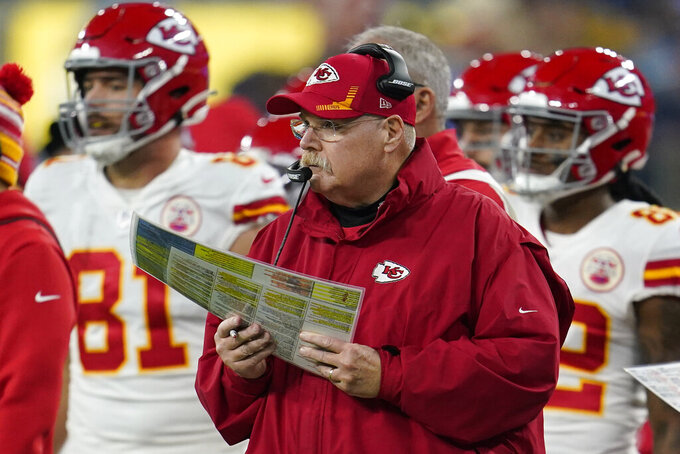 KANSAS CITY, Mo. (AP) — The Kansas City Chiefs had no additional positive COVID-19 tests Wednesday, one day after seven players were added to the reserve list, a promising sign that an outbreak that infected 16 players in all may have subsided.

Now, the question facing the Chiefs — and many other teams — is whether they will have such stars as wide receiver Tyreek Hill, tight end Travis Kelce and defensive tackle Chris Jones available in time for Sunday's game against Pittsburgh.

Or for that matter, whether they will even play the Steelers on Sunday.

“It's part of the world we live in today,” Chiefs quarterback Patrick Mahomes said after Wednesday's practice. “Guys have done a good job so far of trying to stay away from people. But at the end of the day, COVID can hit anyone. We have a lot of great guys in the locker room. We have full trust they can get the job done.”

The Chiefs had as many as 16 players on the reserve list this week — 13 from the active roster and three from the practice squad — but got a couple of them back Wednesday.

Wide receiver Josh Gordon and linebacker Willie Gay Jr., both of whom missed last week's win over the Chargers, were cleared to return to practice and should be available Sunday.

Jones also missed the game against Los Angeles, but has not been cleared to return to practice.

In some positive news, cornerback L'Jarius Sneed returned to practice Wednesday. He's missed the past two games since his older brother, TQ Harrison, was stabbed to death in his hometown of Minden, Louisiana.

“L'Jarius has gone through a couple rough weeks here,” Chiefs coach Andy Reid said, “but he's in a good place and ready to go. That's great, great to get him back in there. I think it's good for our team. I also think it's good for him overall to keep his mind off the other thing, and be able to move forward from there.”

Reid said he's not aware of any discussions to move the game against Pittsburgh from Sunday. The NFL pushed three games back in Week 15 to provide teams that were particularly hard hit by COVID-19 with more time to clear players for kickoff.

That means the Chiefs, trying protect the No. 1 seed in the AFC playoff race and clinch their sixth straight AFC West title, are busy getting a whole slew of fill-ins ready to go for a game with major postseason implications.

Gordon and Byron Pringle are in line to get more playing time alongside wide receiver Mecole Hardman should Hill be unable to play. Hill is second in the league to Cooper Kupp with 102 receptions this season.

The Chiefs already have tight end Jody Fortson on injured reserve. Losing Kelce and Hill leaves only rookie Noah Gray on the active roster at an important position in the Kansas City offense.

Andrew Wylie would slide back into the starting job at right tackle. He's played extensively this season with starter Mike Remmers on injured reserve and Niang having missed several games with a rib injury.

On defense, the Chiefs remain hopeful that Jones will test negative and be available against Pittsburgh. The Chiefs struggled to get pressure on Chargers quarterback Justin Herbert when he was out of the lineup last week.

Gay's return should help the Chiefs deal with the potential loss of Bolton, their standout rookie linebacker, who leads the team with 102 tackles despite not assuming a starting role until midway through this season.

In the defensive backfield, Sneed is expected to start opposite Mike Hughes, who has played well the past several weeks at cornerback. Tyrann Mathieu, who tested positive for COVID-19 before the season, would continue to start alongside Juan Thornhill at safety with Daniel Sorensen backing them up.

The Chiefs added Elliott Fry to the active roster to handle kicking duties with Butker out.

“Listen, we have plenty of bodies and guys that want to play, so nothing has really changed,” Reid said. “We went this long without (an outbreak) and now we're kind of working through it. You see different teams going through these stretches where that happens, and that's kind of where we're at. I don't know what is going to happen going forward.”

NOTES: Practice squad wide receivers Gehrig Dieter and Daurice Fountain and linebacker Darius Harris also remain on the reserve list. ... Defensive end Joshua Kaindoh was at practice Wednesday, a sign that he's been designated to return from injured reserve. The rookie was placed on IR in October with an ankle injury and now has 21 days to return to the active roster. “He's made great progress and we're glad that he's back and healthy," Reid said, “and we'll just see how things go here.”