Chiefs prepped for Texans in pseudo-rematch of Week 6 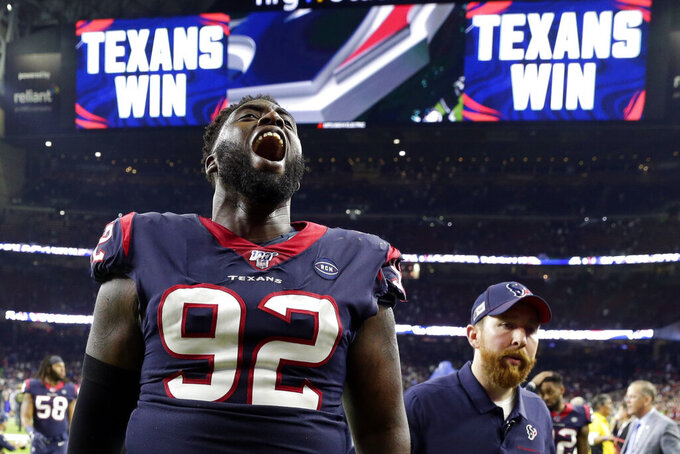 KANSAS CITY, Mo. (AP) — The Kansas City Chiefs will welcome the Texans to Arrowhead Stadium on Sunday for the divisional round of the playoffs, a rematch in name only of their Week 6 nail-biter won by Houston on a fourth-quarter touchdown.

The Chiefs are so markedly different that their early October game is nearly meaningless.

The Chiefs were in the midst of a shaky 6-4 start to the season, their defense was still adjusting to Steve Spagnuolo's new 4-3 scheme, and their injury list was about as long as the receipt at a CVS. Five starters were missing because of injuries, including offensive linemen Eric Fisher and Andrew Wylie, and a handful of other key contributors were hobbled by ailments.

Among them was quarterback Patrick Mahomes, who was still dealing with a sore ankle.

Well, the league's reigning MVP is back to putting up mind-blowing stats, the Chiefs' postseason bye has the team as healthy as it has been all season, and a defense that was once the Achilles' heel has become one of the biggest reasons that Kansas City is among the favorites to reach the Super Bowl in Miami.

The easiest change to parse out between the Chiefs of three months ago and the current bunch is in personnel.

Those big numbers that Mahomes has been putting up have come thanks in part to the emergence of rookie wide receiver Mecole Hardman, who was still getting his legs under him in October, and the return of veteran Sammy Watkins, who was absent during the first meeting with Houston because of a hamstring injury.

The Chiefs also lost cornerback Kendall Fuller in that game. He is back to 100 percent, too.

There have been other personnel changes, of course, and not all of them have been good. The Chiefs lost defensive end Alex Okafor to a torn pectoral muscle late in the season, and rookie safety Juan Thornhill had his dynamic debut season cut short when he tore his ACL in a Week 17 win over the Chargers that helped the Chiefs earn the No. 2 seed in the AFC playoffs.

But even those losses have been offset by some noteworthy additions. First came defensive tackle Mike Pennel, who has helped to shore up the run game. Then came seven-time Pro Bowl pass rusher Terrell Suggs, who was waived by the Arizona Cardinals and claimed by the Chiefs just in time to play in their final two regular-season games and get fully acquainted with the defense for what he hopes is another championship push.

“This team plays with tremendous swag,” said Suggs, who climbed another notch on the career sack list with one against the Chargers. “That's the No. 1 edge that a football player has: confidence. When you have a team that's playing with swagger, and the head ball coach is encouraging that, that can help you in January in playoff football.”

That swagger comes in part from a defense that has leaned on newcomers Frank Clark and All-Pro safety Tyrann Mathieu, the latter of whom played for the Texans last season. They put together a streak of 10 consecutive quarters without allowing a touchdown late in the season, shutting down Tom Brady and the Patriots along the way, and had become so dominant that one of the league's best offenses was left playing little more than a supporting role.

It certainly isn't the same hodgepodge bunch that was still picking up the scheme in Week 6, when Deshaun Watson ran for two scores and threw for another in leading the Texans to a 31-24 victory.

“We have some great momentum heading into the postseason," Mathieu said. “I know my teammates feel the same.”

NOTES: Reid said everybody participated in Monday's workout, a good sign for a team that dealt with plenty of illnesses late in the regular season. ... Mathieu and Hitchens were joined by Mahomes, TE Travis Kelce, P Dustin Colquitt and K Harrison Butker as playoff captains. They were chosen in voting by their teammates. ... Former Chiefs S Ron Parker announced on social media Monday that he was retiring. “He came in as a small-college guy and he just did a great job,” Reid said. “I told him he'd be a great coach. He just has a great way about him.”