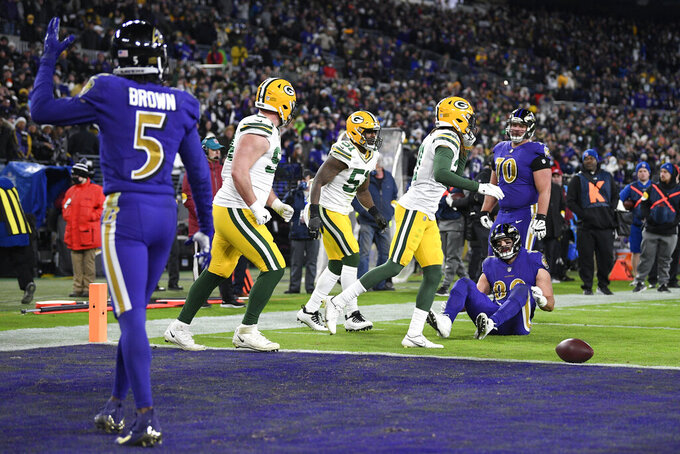 BALTIMORE (AP) — It has been a season of razor-thin finishes for the Baltimore Ravens — and those sure have evened out recently.

Charm City's team lived a charmed life for the first 12 weeks, going 6-1 in games decided by six points or fewer. Now, the Ravens have lost three in a row — by a combined four points.

In each of the past three games, a missed 2-point conversion cost Baltimore dearly. On Sunday, the Ravens' attempt with 42 seconds left failed, and they ended up a point short in a 31-30 defeat against Green Bay.

“I guess that's what makes it so exciting, and when it doesn't work out, so kind of devastating," Harbaugh said. “If we'd have hit two of these 2-point conversions, two of these, we would be No. 1 in the AFC."

Instead, Baltimore (8-6) is tied for first in the AFC North heading into a showdown at Cincinnati (8-6) next weekend.

Harbaugh talked a bit more Monday about the decision to go for 2 after Tyler Huntley's late touchdown. Huntley — playing because of an injury to star quarterback Lamar Jackson — actually ran for two TDs in the final minutes. The Ravens trailed 31-17 before his first touchdown run cut into the lead.

Harbaugh said they could have gone for 2 after that TD — which would have given them something of a safety net, since if they'd missed, they would have still trailed by just eight with 4:47 remaining.

“We could have done that. Just felt like the clock was a little tight,” Harbaugh said.

Harbaugh also said the decision to play for the win instead of for overtime wasn't really made that early.

“I wasn't sure at that point if we were going to go for 2 or not,” Harbaugh said. “That was more of a decision that got made right there late, so I really wanted to delay that decision until the end and just kind of see how I felt about where we were at, how much time was left.”

The Ravens were hoping a full week of practice and preparation would give Huntley a chance to perform well, and that's exactly what happened. In the second start of his career, he threw for two touchdowns and ran for two.

Baltimore scored 30 points after being held to 22 or fewer in six of its previous seven games.

Although Jackson is obviously still Baltimore's franchise quarterback, Huntley has played well enough that the Ravens can feel some confidence in him if Jackson is still limited. It's now a potentially tricky decision if Baltimore has to choose between Huntley and a slightly-less-than-100% Jackson.

“There's no definitive formula,” Harbaugh said. “We're just going to have to see where we're at with all factors.”

As expected, Baltimore's injury-depleted secondary had its problems against Aaron Rodgers. The 31 points Green Bay scored did not do justice to how easily the Packers moved the ball at times, although the Ravens stiffened just enough in the fourth quarter to keep the game close.

It looked briefly as if the Ravens were going to establish their running game in the second half, but when they fell behind by two scores it was harder to continue that approach. Still, Latavius Murray had 48 yards on seven attempts, and Baltimore averaged 5.5 yards per rush as a team.

The Ravens owe at least one victory this year to 2-point conversions. They made two of them — both passes to tight end Mark Andrews — while rallying from a 16-point fourth-quarter deficit for an overtime win over Indianapolis on Oct. 11.

At this point, though, it seems opponents are prepared for the ball to go to Andrews in these situations. The Packers certainly were. And given how often the Ravens have been going for 2, it's fair to wonder if they might have used up their best plays for that spot on the field already.

“We have to have a large array of plays in that area," Harbaugh said. "I think that's one thing that's changed about football in the last five years or so. I think those menus are much bigger than they used to be. You spend a lot of time working on repping those, because you can run out of them pretty quickly.”

10 — The number of catches for both Andrews and receiver Marquise Brown. Huntley targeted them extensively and they mostly delivered.

“You look at Tyler Huntley over there,” Andrews said. “When a guy plays like that, that's special. That's really special.”

The Ravens were 5-1 when they faced Cincinnati at home Oct. 24. The Bengals won 41-17, with Joe Burrow throwing for 416 yards. And Baltimore's secondary is in even rougher shape now.