Cooper active for Cowboys; Saints' Kamara and Ramczyk out 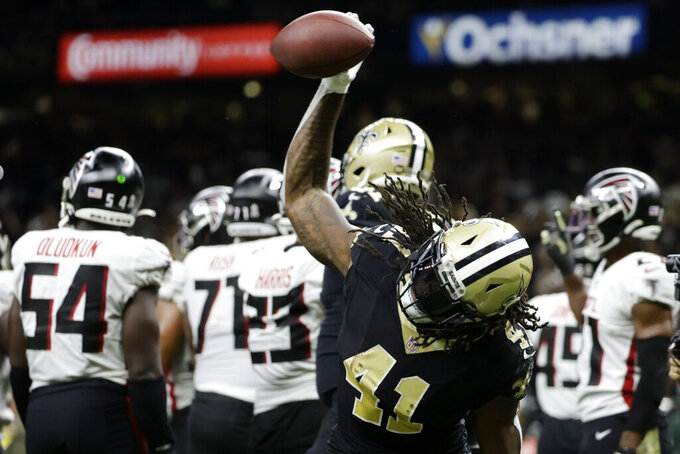 New Orleans Saints running back Alvin Kamara (41) celebrates his touchdown against the Atlanta Falcons during the second half of an NFL football game, Sunday, Nov. 7, 2021, in New Orleans. (AP Photo/Derick Hingle)

NEW ORLEANS (AP) — Dallas receiver Amari Cooper is available to play against the New Orleans Saints on Thursday night after being listed as questionable because of his recent positive COVID-19 test in the final injury reports before the game.

The short-handed Saints already expected to be without defensive end Marcus Davenport (shoulder) and linebacker Kaden Ellis (hamstring), who were ruled out Wednesday. Kamara (ankle), Ramczyk (knee) had practiced on a limited basis this week and had been listed as questionable. Now Kamara is missing his fourth straight game and Ramczyk his third.

Left tackle Terron Armstead (knee), who played last week but did not practice this week, also has been scratched after being listed as questionable. Running back Tony Jones Jr. and reserve quarterback Ian Book are healthy scratches.

Receiver Malik Turner, who was questionable because of an illness earlier this week, was activated for the game.