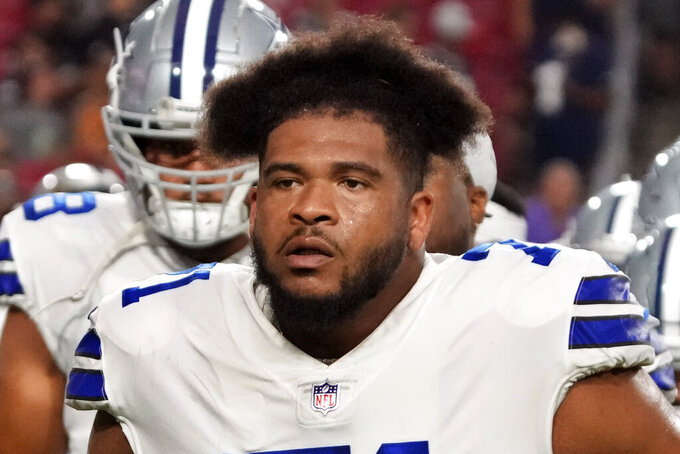 The Dallas Cowboys released right tackle La'el Collins on Thursday in the second cost-cutting move involving one of their starters on offense.

Collins is being designated as a post-June 1 cut to save more money under the salary cap this year. Dallas gets $10 million in cap space this season.

Two days after defensive end Randy Gregory chose Denver over Dallas in free agency, the Cowboys re-signed another pass rusher they drafted in Dorance Armstrong. The four-year veteran is coming back on a two-year deal.

The release of the 29-year-old Collins comes five days after the Cowboys traded receiver Amari Cooper to Cleveland for cap relief. Dallas is moving on from three offensive starters after not re-signing left guard Connor Williams, who is headed to Miami.

Collins became a starter during his rookie season in 2015 after signing with the Cowboys as an undrafted free agent. The former LSU player was expected to be a high pick, but his name surfaced just before the draft in the police investigation of a woman's death. Collins was quickly cleared.

The final two seasons in Dallas for Collins were rough. He didn't play at all in 2020 because of hip surgery. Last year, he got a five-game suspension for violating the NFL's substance-abuse policy.

Collins sued the league with two games remaining on the suspension, and court documents in the lawsuit revealed that the NFL accused him of bribing a drug-testing official. Collins' agent strongly denied the allegations.

After serving the entire suspension, Collins didn't immediately get his job back. The Cowboys stayed with another undrafted player in Terence Steele, although Collins eventually did start again. Steele is expected to replace him again.

Collins had three years left on a $50 million, five-year extension signed in 2019. It was his third contract with the Cowboys. Collins started 71 of 74 games for Dallas, including 47 of 48 regular-season games from 2017-19 before hip surgery.