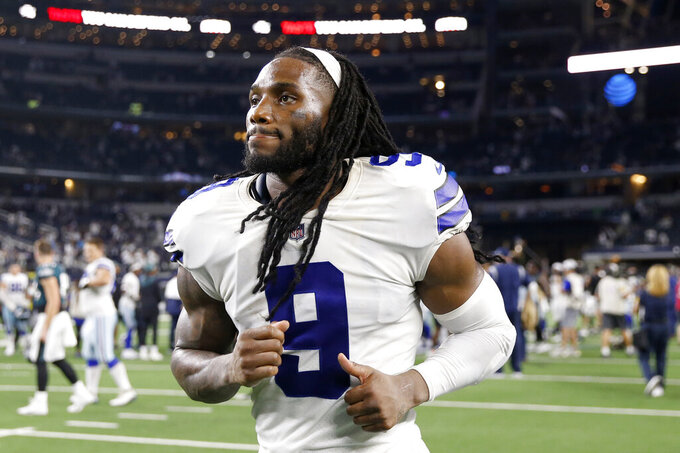 FILE - In this Monday, Sept. 27, 2021, file photo, Dallas Cowboys linebacker Jaylon Smith leaves the field after an NFL football game against the Philadelphia Eagles in Arlington, Texas. The Cowboys are moving on from Smith without getting into the specifics of the decision to release their leading returning tackler four games into 2021. (AP Photo/Roger Steinman, File)

FRISCO, Texas (AP) — Jaylon Smith's murky future with the Dallas Cowboys was most evident when he played just 16 snaps in the opener after averaging 95% of the plays over the previous three seasons.

Now that the roster is looking more like it did in that 31-29 loss to defending Super Bowl champion Tampa Bay, the Cowboys are moving on from the linebacker who recovered from a severe knee injury in his final college game to become one of their most durable players.

Coach Mike McCarthy wouldn't get into specifics for the factors in a release that became official Wednesday, but another one was the looming $9.2 million guarantee on Smith's 2022 salary if he was injured.

McCarthy also wouldn't get in to why they wouldn't keep Smith around for depth as an inactive player, or why they waited until four games into the season. The Cowboys (3-1) play the New York Giants (1-3) in the last of three consecutive home games Sunday.

“There are always factors involved, how you build your 90-man roster, how you go through training camp and get to the 53 and the extended practice squad,” McCarthy said. “He played a lot of good football for us. I have nothing but respect for him.”

Smith's release touched a nerve with fellow linebacker Leighton Vander Esch, teammates since they went to the playoffs together in 2018. Vander Esch said Smith gave a statement to defensive coordinator Dan Quinn to read to the players he left behind.

“The statement he gave ... telling us to go get it and that he’s got everybody’s backs regardless of the situation that he’s in, it just shows you the character and type of person that he is,” Vander Esch said. “Yeah, it’s a tough situation.”

Vander Esch, whose own future with the Cowboys beyond this season is in question, said he found out about Smith's release on social media after getting texts asking him about it. Those circumstances set him off.

“What bugs me most about it is when people that are on the outside, fans or whoever it might be, they want to say, ‘Oh, someone deserves this or someone deserves that,’” said Vander Esch, a 2018 first-round draft pick whose fifth-year option for next season wasn't picked up.

“We don’t go talking about someone else’s job, so why are they talking about our jobs? It’s super frustrating. It’s annoying. I think it’s classless. I’ve got a lot of strong words for it. I know a lot of guys around the league deal with it.”

While Smith's productivity and value on the field were declining, questions will linger whether the Cowboys jeopardized their fast start to the season with a somewhat surprising decision that perhaps could have waited.

The impact was clear on Vander Esch, who said he hadn't talked to Smith and wanted to let things “die down” first. Running back Ezekiel Elliott, who entered the NFL with Smith in 2016, hid his emotions better while acknowledging the bond ran deep.

“I don’t think we can let it be a hit to the energy,” Elliott said. “We can’t let it be a distraction. We still have the goal of winning a Super Bowl this year. Yeah, it sucks. But we’ve got to control what we can control as a team and go out there and get better.”

After Smith's streak of 48 consecutive starts ended in the opener, his snaps went up the next two games while rookie Micah Parsons, the 12th overall pick, played mostly as a pass rusher because of missing defensive linemen.

Parsons was back at linebacker last week against Carolina, and converted safety Keanu Neal is returning against the Giants after missing two games because of a positive COVID-19 test. Defensive end Bradlee Anae also was activated from the COVID-19 list Wednesday.

Smith didn't play as a rookie while recovering from the left knee injury in his final game at Notre Dame — against Elliott and Ohio State. Two years later, he had career highs of four sacks and 13 quarterback pressures before leading the team in tackles the past two seasons.

After signing a $64 million, five-year extension, Smith made the Pro Bowl as an injury replacement in 2019. The contract included $35 million in guaranteed money. The Cowboys moved on because they didn't want to be on the hook for more.

“I just think he’s a great person beyond football,” Parsons said. “He does everything right, really heartfelt for him. I looked at him like a big brother. It was pretty hard when I heard the news.”

NOTES: Elliott didn't practice because of a knee issue. The two-time rushing champion said the tightness he felt in the knee the day after the game had eased considerably and he wasn't concerned about being available against the Giants. ... DT Carlos Watkins returned to practice after missing the previous two games with a knee injury.