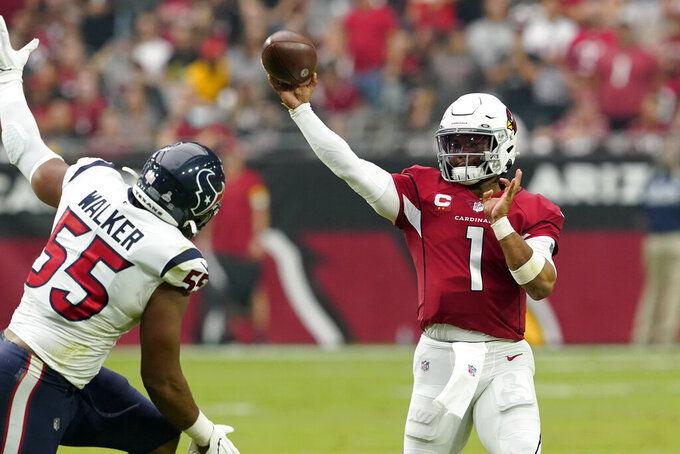 TEMPE, Ariz. (AP) — It's a play that would have haunted the Arizona Cardinals in previous years: Cornerback Byron Murphy Jr. was called for a taunting penalty after a third-down defensive stop, giving the Houston Texans a chance to continue their drive.

This version of the Cardinals wasn't bothered a bit.

Three plays later, linebacker Markus Golden sacked Davis Mills, stripped the football and recovered it, and the Cardinals went on to score a touchdown on the ensuing drive on the way to a dominant 31-5 win over the Texans on Sunday.

“Guys don’t blink defensively,” Cardinals coach Kliff Kingsbury said. “They’ve got great leadership. They know. Those taunting penalties are so subjective now, as we all know. So, he got up, he was excited. It happens. But those guys, they just keep stepping up whenever bad things happen."

Plays like Golden's are a big reason the Cardinals (7-0) remain the NFL's only undefeated team. They'll get one of their biggest tests of the year when they host the Green Bay Packers (6-1) and reigning MVP Aaron Rodgers on Thursday night.

The Cardinals aren't whining about the short week. The way they're playing, they can't wait to get back on the field.

“You've got to be excited for games like this," Golden said. “Especially on a Thursday night, you get to go against the Green Bay Packers and Aaron Rodgers, a great player, so we're excited about that.

"I love Thursday games, especially coming off wins like this."

Last week's trade for Zach Ertz looked like a genius move in the veteran tight end's first game with the Cardinals. The three-time Pro Bowler made a spectacular one-handed grab in the first quarter and scored on a 47-yard touchdown in the second half, which was the longest of his career.

Ertz not only fills a need for the Cardinals after Maxx Williams went down with a season-ending knee injury, but he's an improvement, particularly in the passing game.

QB Kyler Murray's magic feet haven't been quite as useful the past few games. The quarterback's ability to run and escape sacks in the pocket have produced awesome highlights in the past, but those are becoming few and far between. Defenders are starting to catch Murray and he took a bit of a pounding in the Texans game, going to the sideline medical tent twice.

While his feet haven't been quite as effective, his arm has been just fine. The MVP contender completed 20 of 28 passes for 261 yards, three touchdowns and an interception against the Texans.

Golden had two more sacks, including the crucial one after Murphy's taunting penalty, pushing him into the team lead this season with six. There might be bigger names on the Arizona defense, but no one is playing better than the seven-year veteran.

RG Josh Jones has emerged as a solid starter on the offensive line but didn't have a very good day against the Texans. He was beaten multiple times, which sent Murray scrambling, and was also called for holding.

The short week means there's some mystery on the Monday injury report because the team didn't actually practice. DE J.J. Watt (shoulder), C Max Garcia (Achilles tendon), LB Jordan Hicks (toe) and WR DeAndre Hopkins (hamstring) were listed, but it's unclear about the seriousness of any of those injuries. The Cardinals did get good news when LB Chandler Jones and DE Zach Allen were activated from the reserve/COVID-19 list.

111 — The Cardinals lead the NFL in point differential, scoring 225 points and allowing 114. That's the highest in franchise history through seven games. The Buffalo Bills are right behind Arizona with a 105-point differential.

It's a quick turnaround for the Cardinals, who could break a franchise record Thursday with their eighth straight win to start the season. A lot of things are going right for Arizona. Now it's just a matter of staying healthy, especially at quarterback.

“We’ll be smart this week,” Kingsbury said. "Everybody’s got to play these Thursday night games. They’re a tough turnaround. Everybody knows that, but we’ll be smart with our practice schedule and make sure that he feels good.”