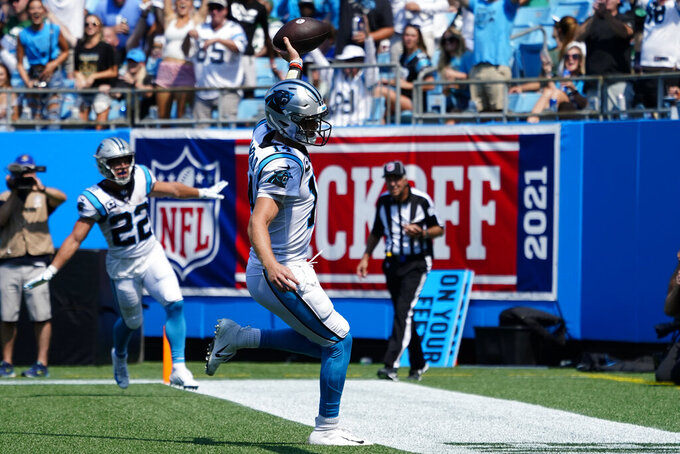 Carolina Panthers quarterback Sam Darnold celebrates after scoring against the New York Jets during the first half of an NFL football game Sunday, Sept. 12, 2021, in Charlotte, N.C. (AP Photo/Jacob Kupferman)

CHARLOTTE, N.C. (AP) — If beating the team that traded him gave Sam Darnold any vindication, the fourth-year quarterback certainly wasn't sharing it.

Darnold maintained his even-keeled persona after throwing for 279 yards and a touchdown and running for another score, helping the Carolina Panthers defeat the New York Jets 19-14 on Sunday for their first win in a season opener since 2018.

He connected on a 57-yard touchdown pass with fellow ex-Jet Robby Anderson and took full advantage of a healthy Christian McCaffrey, who piled up 187 yards from scrimmage on 30 touches after missing 13 games last season with injuries.

Darnold said seeing the Jets on the other sideline was “a little different,” but said once the game began he pretty much forgot about it.

“I mean, I'm sure later tonight or tomorrow when I'm watching the game I'll start to feel that, but it was just good to get a win," Darnold said.

“I thought Sam played excellent,” Panthers coach Matt Rhule said. "... We weren't great up front tonight, but he hung in there and slid around the pocket and found guys down the field and made key third-down throws, key first-down throws and protected the football."

Darnold's replacement, Zach Wilson, suffered through many of the same issues his predecessor did during his three seasons in New York when he was sacked 98 times in 38 starts. Carolina sacked the No. 2 pick in the NFL draft six times and intercepted him once.

Defensive end Brian Burns said the strategy facing the rookie QB was to “hit him a lot, be in his face a lot, try to confuse and just basically make his first game hell.”

Wilson kept battling, though and finished 20 of 37 for 258 yards with two touchdown passes to Corey Davis in his first career start.

Six different players were in sacks for the Panthers.

“That’s the thing with our defense — you never know who is going to make the play,” said Panthers linebacker Shaq Thompson, who had 10 tackles, a sack, an interception and broke up three passes.

“That’s part of the job, right?" Wilson said. “Part of the quarterback pressure is knowing there’s going to be pressure. It’s good for me.”

Wilson’s final sack came with 2 minutes left when his head hit the turf hard after getting landed on by 320-pound defensive tackle Derrick Brown. But he stayed in the game and connected with Davis for with 1:56 left to cut Carolina’s lead to 19-14 and give his team a chance.

“My neck is a little sore. But I’ll be all right,” Wilson said.

The loss also spoiled the head coaching debut of Robert Saleh for the Jets.

Darnold, acquired from the Jets for three draft picks this past offseason, struggled in the red zone early where he turned over the ball on a botched handoff that hit his fullback's arm.

But the momentum changed midway through the second quarter when the Jets went for it on fourth-and-inches near midfield and Panthers defensive end Yetur Gross-Matos tackled Tevin Coleman behind the line of scrimmage.

On the next play, Darnold found Anderson streaking down the middle of the field for a 57-yard score. Darnold then made it 16-0 on the next drive when he scored on a 5-yard touchdown run on a quarterback draw as the Panthers outgained the Jets 272-82 in the first half.

Despite the pressure, Wilson had some bright spots including the late TD toss and a 22-yard touchdown pass to Davis late in the third quarter when he rolled out of the pocket to buy time. He also threw an 8-yard TD pass to Davis with 1:56 left that gave the Jets a chance.

“The kid has been hit before,” Saleh said. “He took some shots today, obviously. But, he got back up. He showed resolve. And he’s fearless. He really is. He’s only going to get better.”

Jets punter Braden Mann (left knee) left in the first half after a teammate grabbed a Carolina player and fell into him. Kicker Matt Ammendola took over punting duties and did well, including a booming 65-yard punt and two punts inside the 20-yard line. He averaged 48.5 yards per punt.

Jets: Starting LT Mekhi Becton left in the second half with a knee injury and did not return. Saleh said Becton was still being evaluated and had no word on the extent of the injury. ... Rookie LB Jamien Sherwood (ankle) and S Lamarcus Joyner (elbow) left in the first half and did not return. ... LB Blake Cashman left with a hamstring injury.

Panthers: CB Myles Hartsfield left with a wrist injury and did not return. Rhule said the injury “could be significant.”