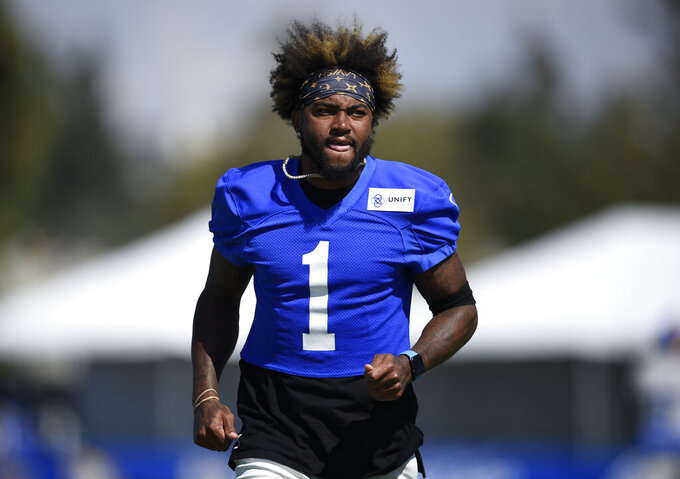 FILE - In this July 31, 2021, file photo, Los Angeles Rams wide receiver DeSean Jackson warms up during NFL football training camp in Irvine, Calif. Jackson is eager to make an immediate impact with the Rams as he begins his 14th NFL season. The veteran receiver also says he's healthy enough to do it as the Rams get to work this weekend with their opener against Chicago. (AP Photo/Kelvin Kuo, File)

THOUSAND OAKS, Calif. (AP) — DeSean Jackson first played for Sean McVay back in 2014, when Jackson was a Pro Bowl receiver in his prime and McVay was an upstart rookie offensive coordinator in Washington.

Seven years later on the opposite coast, McVay's memories of one of the best offensive weapons he has ever utilized as a coach are flooding back.

“What I’ve been as impressed with as anything is I’m seeing the same player,” the Los Angeles Rams' head coach said.

The Rams uniformly love what they've seen in practice from the 34-year-old Jackson, who joined his hometown team to provide its offense with an element it sorely lacked for the last two seasons: Game-breaking, field-stretching pure speed.

They'll finally get to see it in the Rams' opener against the Chicago Bears on Sunday night — because after two years of injury woes, Jackson says he's healthy again.

“Pretty darn close to it,” Jackson said. “I feel rejuvenated and kind of ready to go.”

The Rams expect Jackson to play an important role alongside new quarterback Matthew Stafford. These two respected NFL veterans haven't been on a team that won a playoff game in the past 12 NFL seasons, making motivation no problem for either man.

Stafford is one of the league's best deep-ball throwers, while Jackson at his best was among the greatest deep threats of his generation. If they can show that form for McVay, the Rams will have the major improvements that prompted them to bring in two veterans to an offense that stagnated the last two years.

“The sky’s the limit” for the Rams, Jackson said. “And honestly, I really feel very confident in the group of guys we have here. They’ve already done great in the past, and just to add guys like Stafford and myself here, just excited about it.”

Jackson's final season with McVay in 2016 was also the most recent of his five 1,000-yard receiving seasons. He wasn't as productive in Tampa Bay or back in Philadelphia, where he managed to play in just eight games over the past two seasons due to those injuries.

Yet Jackson was the NFL leader in yards per catch in 2018 with the Buccaneers, earning that honor for the fourth time in his career. His big-play ability is still there when he is running at full speed, McVay fervently believes.

“It’s never been an ability thing,” McVay said. "It's just availability the last couple of years. It’s kind of been some freak accidents that has kept him off the field, but when he has played ... he’s able to still run. He has a great feel for how to separate, catch the ball. (He's an) incredibly smart player that has used a lot of experience he’s gained to apply it in the right way.

"He’s going to be a big factor for us this year.”

The Rams' offensive regulars didn't play in the preseason, in keeping with McVay's long-standing policy. That means they've yet to face real defenses in anything tougher than a joint practice before they take the field at SoFi for the prime-time season opener against Khalil Mack and the Bears.

Jackson is glad to be heading into the season without a scratch, although he chuckled and smiled at McVay's assertion that he's the same player as he was in Washington.

“Shoot, man, I don’t know,” Jackson said. “I feel good. I can’t say if I still feel like the same player, but I feel good. They’ve been taking real good care of me in training camp, and I’ve been getting my reps, getting my work in at the same time, too. So I think it’s a happy medium in between just trying to find that work for a guy like me that’s going on to Year 14.”

Jackson repeatedly said the Rams “don’t want to peak too soon,” though he seemed to be referencing his own excitement for this fresh start as much as his team’s championship chase.

But Jackson and Stafford both sound confident in the Rams' ability to execute McVay's offense successfully right out of the gate. In fact, Jackson says he won't be surprised if his first catch in a horned helmet is on a long pass from Stafford.

“To have a guy like that man be the behind center with his arm power and his playmaking ability skills, it’s going to be frightening for other teams,” Jackson said. “Hopefully we can display that on Sunday a little bit.”