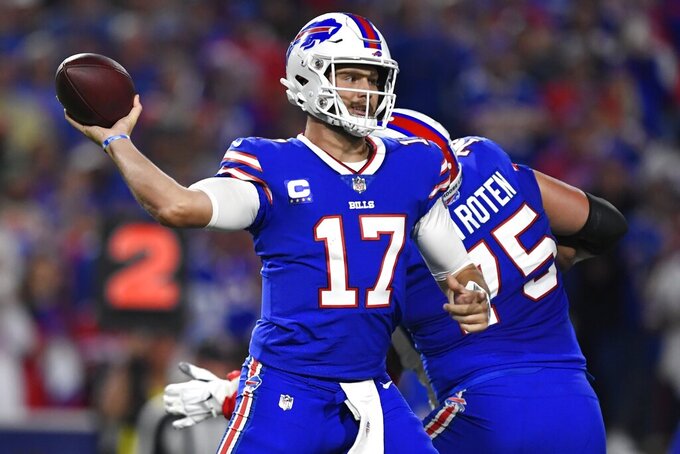 Buffalo Bills quarterback Josh Allen (17) looks to throw a pass during the first half of an NFL football game against the Tennessee Titans, Monday, Sept. 19, 2022, in Orchard Park, N.Y. (AP Photo/Adrian Kraus)

OPENING LINE: Buffalo by 5½, according to FanDuel SportsBook

TURNOVER DIFFERENTIAL: Dolphins plus-1; Bills plus-3.

BILLS PLAYER TO WATCH: Potentially two, actually. Rookie cornerbacks, first-round pick Kaiir Elam and sixth-rounder Christian Benford, could be placed in a position to both start with Dane Jackson ruled out after he was briefly hospitalized after sustaining a neck injury against the Titans on Monday night. While Benford has started Buffalo’s first two games, he and Elam have split time at the job opposite Jackson.

DOLPHINS PLAYER TO WATCH: Jaylen Waddle. Waddle already has 15 receptions for 240 yards and three touchdowns through two weeks. He had a career-high 171 yards against the Ravens and caught the go-ahead touchdown.

KEY MATCHUP: Both defensive backfields vs. both WRs groups. WR Stefon Diggs has 270 yards and four touchdowns through two games, and his 20 receptions are second in the NFL. He’s coming off a three-touchdown, 148-yard game against the Titans, who were the AFC’s No. 1 seed last season, and he’s proven he’s a matchup nightmare for any secondary. The Bills' secondary will face a huge challenge against Tyreek Hill and Waddle, who combined for 22 catches for 361 yards and four touchdowns against the Ravens. With Buffalo facing injuries to some of its defensive backs, it may be a long day of running after Hill and Waddle.

KEY INJURIES: The Bills ruled out four defensive regulars in Jackson, Micah Hyde (neck), DT Ed Oliver (ankle) and DT Jordan Phillips (hamstring). ... S Jordan Poyer (foot) and DT Tim Settle (calf) are listed as questionable. ... WR Gabe Davis returned to practice after missing one game with an ankle injury. ... TE Dawson Knox (foot) and C Mitch Mose (elbow) are listed as questionable. ... Dolphins CB Xavien Howard did not practice Wednesday and was listed with a groin injury. He was limited in practice Thursday. ... TE Cethan Carter remains out with a concussion. ... TE Hunter Long did not practice with an ankle injury. WR Cedrick Wilson, who injured his ribs against Baltimore, was limited Wednesday and Thursday.

STATS AND STUFF: Buffalo’s past 20 victories — including its past three over Miami — have been decided by 10 or more points to match the NFL record set by the Chicago Bears spanning the 1941-42 seasons. The Bills’ most recent victory by nine points or fewer was a 24-21 win over New England on Nov. 1, 2020. ... QB Josh Allen improved to 13-2 when topping 300 yards passing in a win over Tennessee on Monday night. ... Allen’s four touchdown passes matched a career high, and marked the seventh time he’s had that many in his career. He’s second on the team list behind Hall of Famer Jim Kelly, who had four-plus TD games 10 times. ... WR Stefon Diggs scored three times against Tennessee, and now leads the NFL with four touchdown catches. He ranks second with 270 yards receiving behind Hill (284), and second with 20 catches behind the Rams' Cooper Kupp (24). ... The Bills have scored a touchdown on their game-opening and second-half opening drives in both outings this season. They’re now 10-0 when scoring a TD on their game-opening drive since the start of last season. ... S Poyer has an interception in each of his first two games this season. Buffalo has won nine of its past 11 when Poyer has an interception. ... Buffalo’s defense has not allowed a point in the second half this season. ... Newly signed P Sam Martin didn’t attempt his first punt of the season until the 8:33 mark of the third quarter against the Titans. The Bills recovered the ball after the punt was fumbled by Kyle Philips. ... Miami scored a franchise-record 28 points in the fourth quarter against Baltimore. The 21-point margin was Miami’s largest comeback win in a road game in team history. ... QB Tua Tagovailoa’s six touchdowns, 469 passing yards and 124.1 passer rating against Baltimore were all career highs. He became the third-youngest player ever with six touchdown passes in a single game. Tagovailoa is also one of three quarterbacks (Justin Herbert, Patrick Mahomes) with 100-plus passer rating in each of the first two weeks this season. ... RB Chase Edmonds had 77 scrimmage yards (56 rushing, 21 receiving) in his only career game against Buffalo (November 2020 with Arizona). CB Xavien Howard has five passes defensed and two interceptions in his past three games against Buffalo.

FANTASY TIP: With the injuries to Buffalo’s secondary, it may be difficult to contain both of Miami’s speedy receivers Hill and Waddle for the entire game. And given no other team has shown that they’re capable of stopping either player, there’s little reason to think that will happen this week.