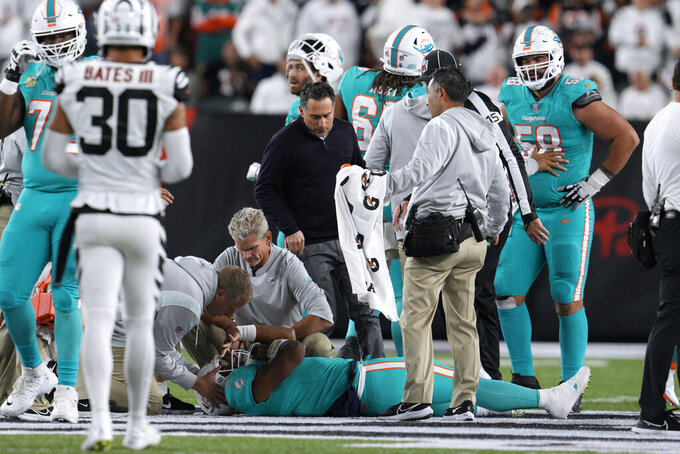 MIAMI GARDENS, Fla. (AP) — Dolphins quarterback Teddy Bridgewater is still showing no concussion symptoms after a hit against the Jets on Sunday caused him to leave the game, but he remains in the concussion protocol after the NFL's revised concussion rules.

Bridgewater has to clear the NFL’s five-step process to return to football activities. Although there is no definitive timeframe for his return, coach Mike McDaniel said the earliest Bridgewater could return to practice would be Thursday.

Starter Tua Tagovailoa is still in the concussion protocol and is “not ready to take the step to do football stuff,” McDaniel said.

McDaniel also did not commit to rookie quarterback Skylar Thompson, who entered Sunday’s game after Bridgewater left, as the Dolphins starter Sunday against the Vikings.

“It’s too soon for me to really pinpoint that,” McDaniel said, “I kind of have to wait and assess the whole situation, which I do not have in scope.”

So the Dolphins will enter this week's preparation for the Vikings in a precarious situation as their quarterbacks have taken big hits in three consecutive games.

“It's a nice challenge,” McDaniel said. “But nothing that myself and the rest of the coaching staff isn't paid to do. No one really cares how hard it is.”

Bridgewater took a hard hit from Jets cornerback Ahmad “Sauce” Gardner on the Dolphins first offensive snap. The veteran quarterback was listed with a head and elbow injury and was immediately taken to the locker room and evaluated for a concussion.

McDaniel said after the game that Bridgewater didn’t show any concussion symptoms and passed tests, but a spotter saw Bridgewater stumble after the play.

Bridgewater was ruled ineligible to return because of the NFL’s revised protocols put into place after Tagovailoa took a hit against Buffalo last month.

When asked what exactly was observed from Bridgewater that triggered the “no-go” rule, McDaniel said he didn’t see it.

“I was there at the game. I was watching him intently. I didn't see him stumble,” McDaniel said. "I'm also not really in the business of grading and coaching spotters.”

Against the Bills, Tagovailoa wobbled when he got up after slamming hard to the turf, but he was cleared to return at the start of the third quarter, to the surprise of many. Tagovailoa was later found to have a back injury, not a concussion.

On Saturday, the NFL and NFL Players Association agreed to make changes to the league’s concussion protocol following a joint investigation into the handling of Tagovailoa’s injury. The league and players’ union said in a joint statement that while the Dolphins followed protocol after the injury, the outcome of the Tagovailoa case “was not what was intended when the Protocol was drafted.”

As a result, they added language addressing abnormality of balance/stability to the league’s list of symptoms that would keep a player from returning to the game.

Bridgewater’s perceived stumble triggered the “ataxia” term, causing him to immediately be put in the concussion protocol.

Bridgewater started Sunday in place of Tagovailoa, who suffered a concussion in Miami’s Sept. 29 game against Cincinnati, four days after taking the hit against Buffalo. He was stretchered off the field and taken to a hospital and remains in the concussion protocol.

Thompson finished 19 of 33 for 166 yards and an interception in his NFL debut.