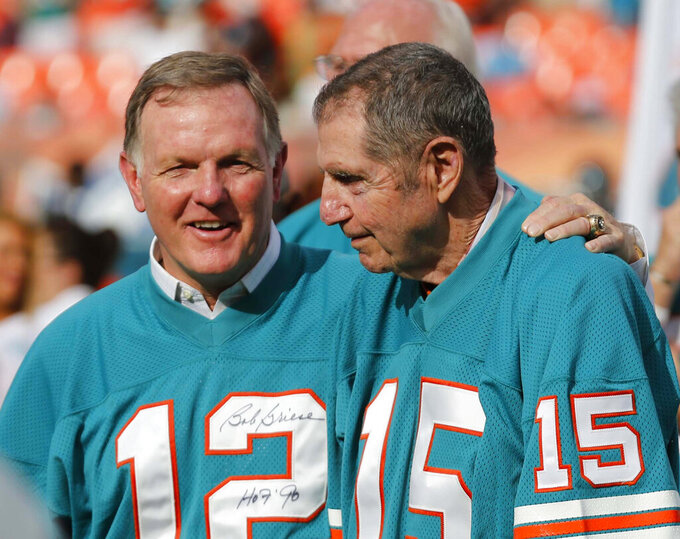 FILE - Former Miami Dolphins 1972 players Bob Griese (12) and Earl Morrall (15) enjoy a half time celebration honoring the 1972 undefeated team at an NFL football game against the Jacksonville Jaguars, Sunday, Dec. 16, 2012, in Miami. Even though they weren't chasing perfection at the time, they ended up accomplishing something that no team since has repeated. (AP Photo/John Bazemore, File) 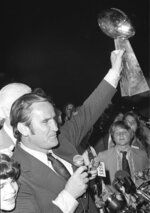 MIAMI GARDENS, Fla. (AP) — Two eras of football collided Sunday night as the Dolphins of the past and present shared the field at Hard Rock Stadium.

Members of Miami's perfect 1972 team gathered at midfield for the coin toss prior to a game against the Pittsburgh Steelers. Fifty years after their milestone season, fullback Larry Csnoka, quarterback Bob Griese, offensive guard Larry Little and reciever Paul Warfield were cheered as highlights of their 17-0 season played on the video screen above them.

Tua Tagovailoa, making his first start since a Sept. 29 concussion, and the rest of the current Dolphins trotted onto the field in throwback uniforms to honor their predecessors.

None of the current Dolphins were born when that ‘72 team played, and much about the game has changed. That much was clear even at the concession stands Sunday, when throwback prices brought the cost of a fountain soda down to 75 cents and a hot dog to $2.

This year's club still recognizes the magnitude of that team’s unmatched feat.

"That’s obviously a special team, and they stand alone on their own," said defensive tackle Christian Wilkins. “To go undefeated, win at all, I definitely got a lot of respect for those guys and our predecessors and the things they were able to accomplish because that’s not an easy task."

The night before, the Dolphins honored that team at a gala in Hollywood, Florida. As they entered a grand ballroom lit with Dolphins colors, some former players wore gold Pro Football Hall of Fame jackets. Others wore the franchise's unmistakable aqua ones. They hugged. They laughed. Some cried.

“Getting together as a group is very nice,” Csonka said, “and it’s nice for the Dolphins to do that to where we’re actually looking at each other, pressing flesh and able to talk, lean on each other, smile, smoke cigars and all of that.”

Csonka said that some members of the team get together every year or so, but this is the first time in a while so many of them will be in the same place.

“For us still to be the only undefeated team in history,” Little said. “Once a team is getting close to going undefeated, they bring it all back from the day they start talking about us again, because other than that they forget about us. But you know, I’m happy that we are still being recognized because that is a tremendous accomplishment that we had.”

At halftime, the Dolphins will gather with family members of players who have died for an on-field presentation.

Csonka said it will be especially tough for everyone to be together without their fiery coach, Don Shula. He died at 90 on May 4, 2020.

“He was just such a strong and prominent figure in so many of our lives,” Csonka said, “that you just assume he’s always going to be there. And then suddenly to be talking about him in the past tense was a really bitter pill. It made us realize we’re all getting older.”