Dolphins hoping to get running game going against Lions 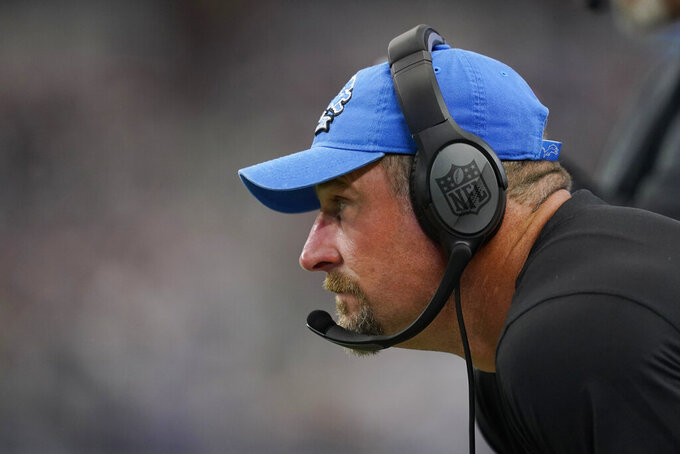 Detroit Lions head coach Dan Campbell watches from the sideline during the first half of an NFL football game against the Dallas Cowboys, Sunday, Oct. 23, 2022, in Arlington, Texas. (AP Photo/Tony Gutierrez)

DETROIT (AP) — The Miami Dolphins know their offense needs more balance if they want to take a big step forward this season.

They also recognize they might never get a better chance to fix that than this week against the Detroit Lions.

With Tua Tagovailoa, Tyreek Hill and Jaylen Waddle, the Dolphins are as dangerous through the air as any team in the NFL. But it could be even better with a running game that could at least distract defenses.

Hill and Waddle are averaging 13 catches for 199.1 yards a game – 15.3 yards per catch – despite defensive coordinators being able to devote all of their resources to stopping the passing attack.

Raheem Mostert is averaging 55.4 yards per game with only one touchdown, and he isn’t getting much help. Chase Edmonds has 106 yards in seven games and backup quarterback Teddy Bridgewater is third on the team with 21 yards on two attempts.

“The teams that are good get better during the season, and that’s hard because there are so many other things that can take your mind and you’re tired,” Dolphins coach Mike McDaniel said. “When we’re better at our fundamentals — and I’m talking about every position involved in the run game — I think our game gets better.”

“We need to sustain drives, be better in the red zone, and better at all of it. You aren’t given that. You earn it.”

Mostert’s results have slowly been improving. He has at least 75 scrimmage yards in three of the past four games, and his season-high 113 yards against the Jets was the most since he rushed for 220 yards with San Francisco in the NFC championship game on Jan. 19, 2020, vs. Green Bay.

However, the opportunity will be there for a much bigger day against a Detroit rushing defense that has allowed 977 yards (31st in the league) and 12 touchdowns (32nd) in six games. The Lions have given up at least 123 yards in each of their five losses, with the Eagles and Seahawks both topping 200.

While Detroit’s pass defense has looked better in the last two weeks, the Patriots and Cowboys combined for 315 yards rushing. The one bright spot was cornerback Jeff Okudah, who played as a hybrid defensive back/linebacker against Dallas and finished with 12 solo tackles and three assists.

“We’re trying to create those bookends and funnel everything inside to our defensive tackles,” Lions coach Dan Campbell said. “That means, if the back tries to cut in there, we’ve got our whole run support in a phone booth. That helps those guys, but they have to step up and make the tackles.”

Of course, run defense is far from Detroit’s only problem. They are last in the league in points and yards allowed, and after scoring 140 points in the first four games of the season, they’ve only managed six in the last two.

That’s why Tagovailoa wants to make sure his teammates remember they are facing a real NFL team Sunday.

“It’s never bad to remind the guys that this isn’t just like a college team we’re playing,” he said. “These guys get paid, too, and they’ve got some really good players. I know they are still trying to put everything together, but that doesn’t discredit a lot of the good things they do.”

BACK TO WHERE IT STARTED

Campbell’s head coaching career started in Miami, when he went 5-7 as the interim coach after replacing the fired Joe Philbin in 2015. He then spent five seasons with the Saints as an assistant head coach before coming to the Lions last season.

“That was a different time and place because of the way I took over and where we were at as a team,” he said. “My first time doing it was in the regular season, and you pick up a lot of experience on the fly. I’ve come a long way since then.”

Tagovailoa’s return from a concussion last Sunday didn’t mean he was going to take it easy.

On a scramble in the first half, he lowered his shoulder into Steelers linebacker Devin Bush, a play McDaniel said after the game that he’s “never going to totally encourage,” adding that he advises Tagovailoa to slide in those situations.

“I get that, coming off of the injury and what had happened prior with the concussion,” Tagovailoa said. “But to me, it’s football. You go out there and for me, I can see the first down in instances, and want to do all that I can to go and get it. I want to be able to continue making plays that I feel can contribute to moving the chains and helping our team.”

Lions quarterback Jared Goff has taken a team to the Super Bowl and been selected to two Pro Bowls, so he knows his performance in the last two weeks — he has turned the ball over six times while the Lions have only managed two field goals — has been unacceptable.

“For most of the season, I’ve been taking good care of the ball, but I maybe developed a bad habit in the New England game,” he said, referring to the game in Week 5 when he threw an interception and lost a fumble. “I just need to put an emphasis on stepping up in the pocket more and helping our guys out, and focusing on taking care of the football.”