Dolphins, Saints meet after rallying back to relevance 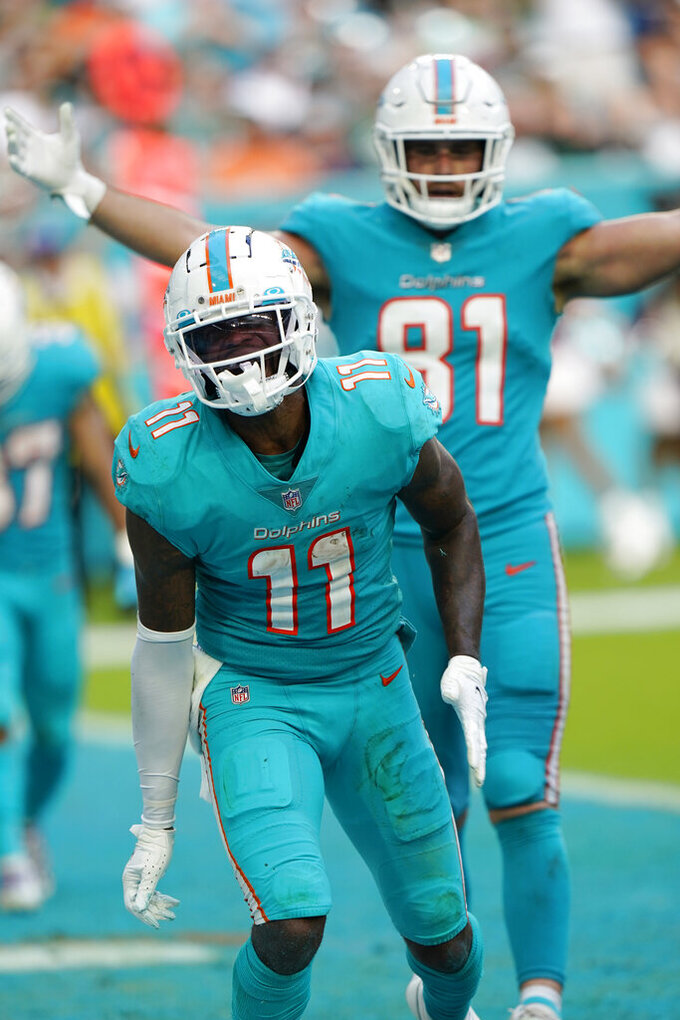 BETTING LINE: Dolphins by 1½, according to FanDuel SportsBook.

TURNOVER DIFFERENTIAL: Dolphins minus-2; Saints plus-3.

DOLPHINS PLAYER TO WATCH: WR Jaylen Waddle, who couldn’t play last week because of COVID-19 protocols, is up to 86 catches, already a Miami rookie record, and is 15 shy of the NFL rookie mark of 101 set by Anquan Boldin in 2003. Waddle has 849 yards this season, 34 away from Chris Chambers’ Dolphins rookie mark in that category.

SAINTS PLAYER TO WATCH: DE Marcus Davenport had a sack last week and has a career-high 6 1/2 sacks and nine tackles for loss this season.

KEY MATCHUP: Dolphins QB Tua Tagovailoa against a Saints defensive front that last week sacked Tampa Bay’s Tom Brady four times and forced him into two turnovers on a fumble and interception. Tagovailoa was intercepted twice and sacked once by the Jets last week.

KEY INJURIES: Waddle and RB Phillip Lindsay came off the COVID-19 reserve list on Monday, but safety Jevon Holland did not. Lindsay also has been limited at practice by an ankle injury and TE Adam Sheheen has been limited by a knee injury. Miami coach Brian Flores said WR Will Fuller, who has missed most of the season with finger fractures, is no longer expected back this season. Saints QBs Taysom Hill and Trevor Siemian; TEs Juwan Johnson and Adam Trautman; S Malcolm Jenkins; OT Jordan Mills; DT Christian Ringo; DE Jalyn Holmes; LB Kaden Eliss; S Jeff Heath; and G James Carpenter all have been placed on the club's COVID-19 reserve list this week. LT Terron Armstead and RT Ryan Ramzcyk are trying to come back from knee injuries.

SERIES NOTES: New Orleans has won three straight in the series by a combined score of 104-51. ... It’s the first game in the U.S. between the teams since a 2013 meeting in New Orleans, also a Monday night matchup. ... Flores will be the seventh Miami coach in the last seven meetings between the teams. Sean Payton is coaching the Saints against the Dolphins for the fourth time. ... The last Miami coach to beat New Orleans: Nick Saban in 2005 at LSU's Tiger Stadium. ... Saints-Dolphins games tend to get one-sided, with nine of the last 12 meetings decided by 10 points or more, four of them by 20 points or more.

STATS AND STUFF: The Dolphins are trying to immediately follow a seven-game losing streak with a seven-game winning streak, while the Saints have won two straight since ending a five-game skid. ... This is Miami’s first road game since Nov. 21 at the Jets. ... The Saints are 24-23 on Monday nights, the Dolphins are 42-43. ... Miami is playing on Monday night for the 86th time, second most in the NFL behind Dallas’ 87 appearances. ... This is New Orleans’ second Monday night game of 2021. The Dolphins haven’t had a two-Monday schedule since 2017. ... The last season in which the Saints didn’t have a Monday night game was 2004, and this is the 10th time in the last 11 seasons in which New Orleans had a MNF game at home. ... The Dolphins are 6-4 this season with Tagovailoa at QB. Tagovailoa leads the NFL in completion percentage at 69.9. ... Tagovailoa passed for 196 yards and two TDs last week and has had a rating of 100 or better in four of his past five starts, as well as a completion rate above 70% in three of his past four games. ... RB Duke Johnson had a career-high 127 scrimmage yards (107 rushing, 20 receiving) and two TDs rushing last week. ... Waddle has at least eight catches in his past three games and leads rookies with his 86 catches. ... LB Jerome Baker had two sacks last week and has at least one tackle for loss in each of his last three games. ... DE Emmanuel Ogbah had a sack and pass defensed last week. ... Saints RB Alvin Kamara has 1,016 scrimmage yards (668 rushing, 348 receiving) and is one of two RBs (Ezekiel Elliott) with 1,000-plus scrimmage yards in each of the past five seasons. ... WR Marquez Callaway led New Orleans with six receptions for a career-high 112 yards last week in what was his first-career 100-yard game. ... DE Cameron Jordan had two sacks and a forced fumble last week and became the fifth active player with 100 career sacks (100 1/2). ... LB Demario Davis needs five tackles for his fifth-straight 100-tackle season.

FANTASY TIP: Expect Kamara to be the focus of New Orleans' offense given how COVID-19 affected the Saints' roster this week.