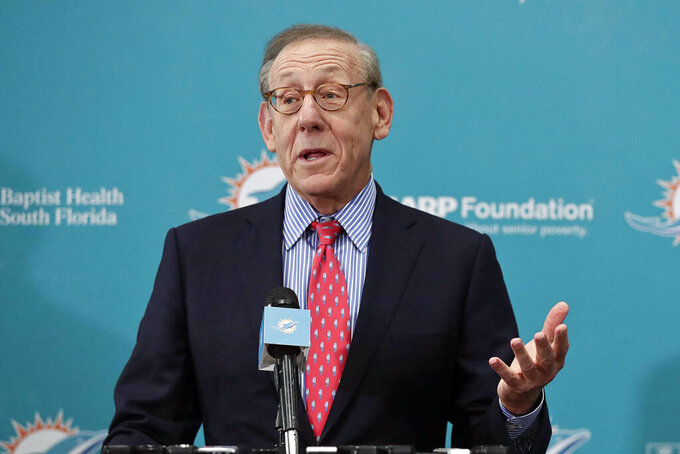 MIAMI GARDENS, Fla. (AP) — Miami Dolphins receiver Kenny Stills says he has no hard feelings toward Stephen Ross regarding the team owner's support of Donald Trump, and says his objections to a fundraiser for the president aren't political.

But Stills says there's a contradiction in Ross supporting both racial equality and Trump.

"It's not right," Stills said following the Dolphins' preseason win over the Atlanta Falcons on Thursday night. "Our country is in a rough place right now. I think there are other candidates he could support, but it's not about Democrat or Republican. It's about why are you trying to help this man raise money to continue to do the things he has been doing."

In the wake of his recent criticism, Stills said, he has received death threats — "five to 10 in a night" — on social media but didn't report them.

Stills earlier criticized Ross on Twitter for planning to host a fundraiser Friday at his Long Island home for Trump. Stills noted that Ross is the founder of RISE, a nonprofit that strives to eliminate racial discrimination, champion social justice and improve race relations.

"It doesn't align," Stills said in the postgame locker room. "Someone has to have enough courage to let him know you can't play both sides of this. Maybe I shouldn't have done it on social media, but I did. If you're going to associate yourself with bad people, then people are going to know about it."

In a statement Wednesday, Ross said he's a champion of racial equality but also a longtime friend of Trump's and "an active participant in the democratic process."

Coach Brian Flores said he talked with Stills about the tweet criticizing Ross.

"I understand him wanting to be a voice for people who don't have a voice," Flores said. "I asked him why he didn't talk to Steve first before putting something out. I think that's something that we have to do more of. There's got to be more communication, more conversation, if we want to really make change. And I wish he would have done that."

Stills said he hasn't spoken with Ross since posting the tweet, but will at some point. He said he harbors no hard feelings toward the Dolphins owner, and said there has been little reaction from teammates to the situation.

"Most guys really aren't paying attention," Stills said. "I just try not to be a distraction to my teammates, and it hasn't been."

Flores' message was to keep it that way, Stills said.

"He said to remain focused on the game, and don't let this stuff become a distraction to the team," Stills said.

Stills, who has been kneeling during the national anthem since 2016, did so again before Thursday's game.