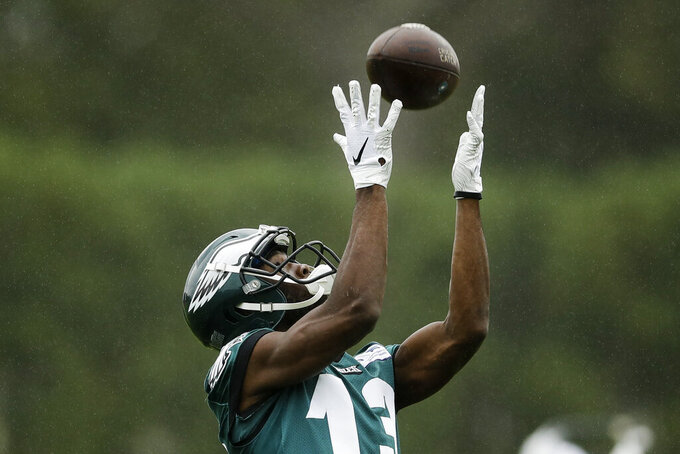 PHILADELPHIA (AP) — The standings are a reality check for the Philadelphia Eagles when they host the winless New York Jets.

Sure, Jets (0-3) are down to their No. 3 quarterback. They only have one offensive touchdown in three games, they've never defeated Philadelphia in 10 tries and they're 13 1/2-point underdogs.

"We're all pros," defensive tackle Fletcher Cox said. "Let's be real, we're 2-2. We have to go out and attack as if anybody else is coming in here."

The Eagles lost their last home game to Detroit two weeks ago and have started slow in their first four games, getting outscored 27-10 in the first quarter. They don't want to allow the Jets to jump ahead early, build momentum and think they can steal a win.

"They're not 0-3 because of their defense," tight end Zach Ertz said. "It's a really talented defense and, as an offense, it's going to be a good test for us."

Here's some things to watch for when the Jets visit the Eagles:

Jets quarterback Sam Darnold was ruled out Friday for the game as he continues to recover from mononucleosis, which sidelined him the past two games.

He was cleared for non-contact activity and was limited at the start of the practice week, but doctors determined from tests Thursday night that Darnold was not cleared to play. Darnold's enlarged spleen is the primary focus, with the swelling of the organ needing to dissipate before he's cleared by doctors for contact.

Practice squad QB-turned-starter Luke Falk will be under center against the Eagles. It will be Falk's second straight start for the Jets.

"Luke, he was all in and wired in and knew that this could happen," coach Adam Gase said.

"I think we had a great week of practice," Falk said. "I think we've got a good plan. I think guys are flying around, so I'm real excited for the opportunity and I know the guys are as well."

Eagles quarterback Carson Wentz only threw for 160 yards in a 34-27 win at Green Bay, but tossed three touchdowns and posted a 113.2 passer rating. Now in his fourth season in coach Doug Pederson's offense, Wentz is even more comfortable than he was when he finished third in NFL MVP voting two years ago.

"Probably the biggest thing is just understanding more of the offense, knowing where everybody is," Pederson said. "He's getting the ball out of his hand. He's making great decisions with the football, getting us in and out of maybe a bad play into a better play. We've used probably a little more tempo offense or no-huddle offense which allows him to see the defense, which he's very good at doing."

Despite the bye-week break, the Jets could still be missing several key contributors aside from Darnold.

Meanwhile, the Eagles are depleted in the secondary. Cornerbacks Ronald Darby (hamstring) and Avonte Maddox (neck/concussion) are out and Sidney Jones (hamstring) is questionable. Also, wide receiver DeSean Jackson (abdomen) was ruled out and will miss his third straight game.

New York's offense has struggled to get much of anything going through three games, scoring just 11 points.

A lot of the issues stem from the quarterback troubles and starting three players at the spot in as many games. Even the defense has outscored the offense, accounting for 15 points so far.

Third down has been a big problem for the Jets, who are just 9 of 43 (20.9 in those situations. They also have just 36 first downs, compared to 60 by their opponents.

"You can know as much as you want to know, but they're still good players," Gase said. "He knows that roster inside and out. He can help at least tell us what kind of guys they are and kind of how they work and what might be some weaknesses. But you're talking about a team that won a Super Bowl two years ago. They're pretty deep. They have a lot of really good players."

W.g. Ramirez 15 minutes ago
By John Wawrow an hour ago
By Steve Megargee 2 hrs ago
By Josh Dubow 3 hrs ago
By Tom Withers 3 hrs ago