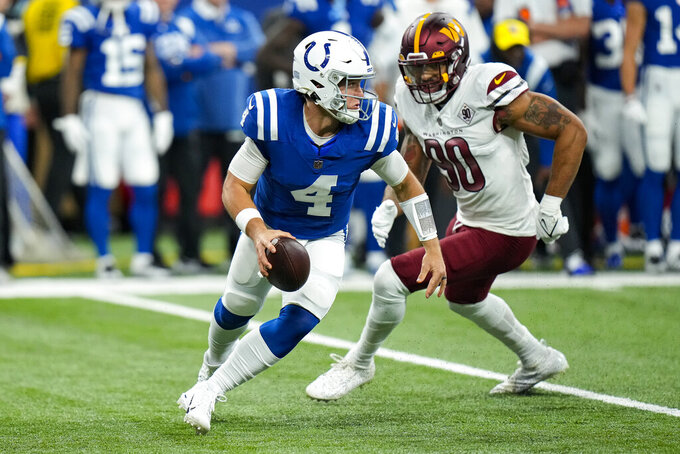 It just wasn't good enough for a victory.

The second-year quarterback went 17 of 23 for 201 yards in his first NFL start, but he came up a half-yard short on a third-down run with 3:38 to play. Instead of going for it from the Colts 34-yard line, coach Frank Reich punted and Washington took advantage by driving for a touchdown with 22 seconds left and a 17-16 win.

Ehlinger made no excuses.

“I thought as an offense we had a lot of opportunities, we just shot ourselves in the foot,” he said. “Two turnovers, got down to the inch-yard line and came away with three points — that's not good enough in this league. But we showed we could be an explosive offense, we had explosive plays and we’ve got to keep building from here.”

At times, the Colts (3-4-1) seemed more efficient than they did in most of their previous seven games.

They took a rare first-half lead on a field goal early in the second quarter, though by halftime they were trailing again — for a 10th consecutive game, the league's longest active streak.

And Ehlinger provided a dimension that didn't exist with the former starter, 37-year-old Matt Ryan, who was benched after turning the ball over a league-high 12 times.

At age 24, Ehlinger's younger legs helped him evade pass rushers and make throws on the move. While he was far from perfect, coach Frank Reich was encouraged.

“I thought he threw the ball well, I thought he looked poised, made good decisions, gave us a chance,” Reich said. "We’ll look at the film more closely, but my first impression was that he played well.”

Predictably, Washington (4-4) tried to complicate life for the youngster.

The Commanders opted for more five-man fronts and mixed up coverages against the inexperienced Ehlinger, who had never thrown an NFL pass until Sunday. In fact, the last pass he threw that actually counted came in December 2020.

“We gave up some explosive (plays) and it’s something we’ll focus on again and try and make sure it doesn’t get repeated,” Washington coach Ron Rivera said. “I thought changing some things up and making it look different and doing some of the things we were doing in the past, I think really helped.”

But aside from the fumble, which likely cost Indy points, Ehlinger's presence helped.

Defending rushing champ Jonathan Taylor looked more like his old self, carrying 16 times for 76 yards, an average of 4.8 yards, though he also lost a fumble in the red zone.

Indy allowed just two sacks, and Ehlinger found Alec Pierce for 47 yards, Parris Campbell for 38 and Hines for 22 — plays that have been mostly missing this season.

Now it's up to Ehlinger, and Reich, to find ways they can grow into this new setup and thrive.

“I thought that to be out there against a good defense, they brought a lot of stuff, to get in that first regular-season experience was important,” Ehlinger said. “Hate the outcome and I'm going to grow from it.”