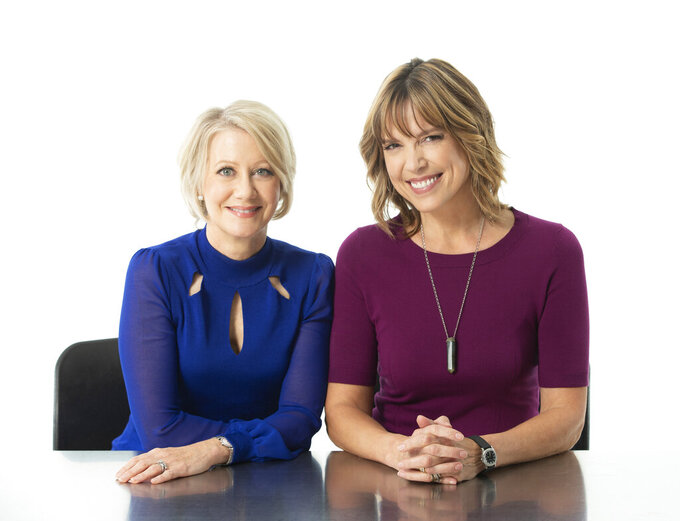 This photo provided by Amazon shows Andrea Kremer, left, and Hannah Storm posing for a portrait at Pier 59 studios on Sept. 21, 2018, in New York. Hannah Storm and Andrea Kremer had so much fun in their first season calling NFL games on Amazon Prime that they are coming back for an encore. Amazon announced Thursday, Jan. 24, 2019, that the veteran announcing duo will return next season to call the Thursday night package on Amazon's prime video service. (Amazon via AP)

Hannah Storm and Andrea Kremer had so much fun in their first season calling NFL games on Amazon Prime that they are coming back for an encore.

"It's validation," Kremer said. "You want to be able to show with actions not just words that what we did was meaningful and entertaining and people wanted to watch and listen to us and considered us a viable option to the other great choices that are out there. The fact that Amazon made this decision sooner than we expected was just a real joy to us and made us feel like we were the right choice."

Storm and Kremer were hired last August to do the 11 Thursday night NFL games on Amazon on an alternate English-language feed to those who wanted something different from the Fox broadcast with Joe Buck and Troy Aikman.

Amazon did not release numbers on how many people chose to listen to Storm and Kremer as opposed to the Fox feed featuring Joe Buck and Troy Aikman, but head of live sports Jim DeLorenzo said the feedback was extremely positive.

It was a new role for both. Kremer spent most of her career as an Emmy Award-winning reporter who was honored by the Pro Football Hall of Fame last year with the Pete Rozelle Radio-Television Award.

Storm has had a long career as a studio host and anchor, who had only limited play-by-play experience on the WNBA.

But they both took the opportunity to do something new, becoming the first all-female booth to call any major men's team sport in the United States.

"When you do something no one has ever done before, you open yourself up to a certain level of risk because you can be at times heavily criticized," Storm said. "They're people who might not like the idea of women doing football or basketball or baseball. There will always be people who push back on something that is not the norm. We wanted to make sure we were comfortable with that element of it, which we were."

Storm and Kremer are part of a trend of more women getting the chance to do play-by-play or analysis on men's sports.

Doris Burke has transitioned from being solely a sideline reporter to a role as a game analyst on ESPN's NBA coverage. Jessica Mendoza has been a lead analyst on ESPN's Sunday night baseball coverage since 2015. AJ Mleczko went from covering women's hockey at the Olympics to analyzing NHL games for NBC Sports Network. Beth Mowins has called NFL games as a play-by-play announcer for both CBS and ESPN.

"When Hannah and I were discussing this, she said to me, 'If not us, then who,'" Kremer said. "That's pretty significant. If we do this, we're opening up opportunities for other women. If we don't do it, that's a responsibility that we have. I hope that more women get opportunities but I hope it's the right women for the right reasons."

The addition of an alternate audio feed with Storm and Kremer was the biggest change in Amazon's second season streaming Thursday night NFL games. After making its debut in 2017, the online retailer signed a two-year, $130 million contract last year to keep the streaming rights to the games.

Amazon's 11 games on Prime Video and Twitch reached 24.4 million total viewers, a 33 percent increase from its first season. The average audience topped 500,000 per minute, a 61 percent increase, with the average viewer watching for 59 minutes.

In all, more than 1 billion minutes of live NFL game content was watched on Prime Video and Twitch.

Amazon is expanding its sports coverage with deals in place for PGA Tour Live and NBA League Pass, to go along with deals in the United Kingdom for ATP Tennis and a small package of Premier League soccer games.

How much more live sports the company bids for remains to be seen.

"Any time that we're looking at additional opportunities, we're always starting with the customer to see if it's content that we think they will really love," DeLorenzo said. "We are still pretty early on in the life cycle of Amazon offering live sporting events to our customers. It's been a great learning experience for us and we're continuing to look at the data to determine what we want to do going forward."