'End of the road' indeed as Steelers limp into bye reeling 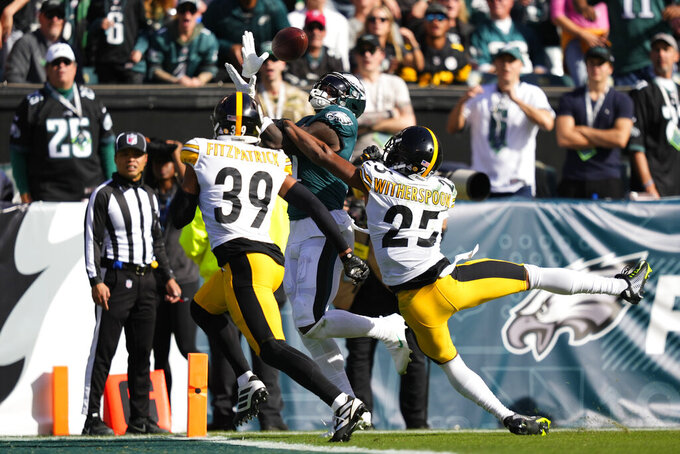 PITTSBURGH (AP) — The Boyz II Men classic “End of the Road” blared through the Pittsburgh Steelers locker room last week, a selection made by designated club deejay Marcus Allen, who frequently turns the speaker near his locker up to 11 after practice.

Feel free to insert the joke of your choice here, because right now, the joke is on one of the NFL's marquee franchises.

The Steelers are 2-6 as their 2022 season mercifully nears the midway point, and coach Mike Tomlin's streak of never posting a losing record appears in serious jeopardy.

“We’re not positioning ourselves to win games,” Tomlin said.

This isn't the first time during Tomlin's largely successful tenure that his team has found itself adrift. The Steelers dropped six of eight to start the 2013 season, the nadir coming in a historic 55-31 beatdown at the hands of New England in which Tom Brady and the Patriots piled up an astounding 610 yards against a once-proud defense, doing whatever they wanted whenever they wanted.

It looked much the same on Sunday in Philadelphia as the undefeated Eagles put together a clinical 35-13 dismantling of their cross-state rivals that exposed the current chasm between two teams heading in opposite directions.

The blowout also doubled as a reminder of how quickly things can change.

Two years ago in Pittsburgh, the Steelers raced by Philadelphia 38-29 on its way to an 11-0 start. Pittsburgh wide receiver Chase Claypool, a rookie at the time, scored four touchdowns.

On Sunday, Hurts threw a career-high four scores while Claypool — despite lobbing a touchdown pass to fullback Derek Watt on a gadget play — and the rest of Pittsburgh's offense again found it difficult to generate any sort of consistent rhythm.

Back in 2013, Pittsburgh put together a solid 6-2 second half to finish 8-8 and nearly make the playoffs.

That team, however, had quarterback Ben Roethlisberger in his prime, an ascendant Antonio Brown and Troy Polamalu willing one last Pro Bowl season out of his Hall of Fame career. It also had a roster dotted with players who had Super Bowl rings tucked safely away at home.

The 2022 version of the Steelers do not.

The NFL's youngest offense — the only starter over 26 is Watt, who hasn't played more than seven offensive snaps in a game all season — doesn’t have someone who's “been there, done that” to lean on.

That void has thrust rookie quarterback Kenny Pickett and second-year running back Najee Harris into prominent leadership positions perhaps earlier than they anticipated.

“We need to look each other in the eyes and get it turned around,” said Pickett, who has two touchdowns against eight interceptions.

Until then the Steelers are likely to, as the Boyz II Men's New jack swing classic goes , keep “spinning around and around.”

The schedule. While it will take far more than a week to fix the wide variety of issues the Steelers are facing, the break at least provides a chance for Tomlin and the coaching staff to hit the reset button.

Pretty much everything else. The defense that was supposed to be dominant has fluctuated between “good but not great” and “highly gettable” without all-everything outside linebacker T.J. Watt. The offense lacks an identity because it can't run the ball effectively or push the ball downfield. Whatever thin margin for error the Steelers needed to work within to be competitive in 2022 is long gone.

Rookie running back Jaylen Warren stayed in a hotel room during training camp, unsure whether he'd make the team as an undrafted free agent. He went looking for an apartment 30 minutes after finding out he'd made the 53-man roster, signing a six-month lease. He likely will get a chance to extend that to a year as he continues to impress with his quickness and fearlessness.

Minkah Fitzpatrick is one of the best safeties in the league. Yet he is being asked to do so much every mistake he makes as the last line of defense gets magnified. He misjudged the ball on Hurts' first touchdown pass to A.J. Brown, letting Brown turn what could have been an interception into a surprisingly easy score.

Watt is close to a return after missing the past seven games with a torn left pectoral. The reigning Defensive Player of the Year should give a pass rush that's been largely ineffectual in his absence a boost. ... DT Larry Ogunjobi will get a week off to get healthy. ... Same for K Chris Boswell, though last-second replacement Nick Sciba made all three kicks he attempted in his NFL debut.

11-4: Pittsburgh's record after a bye under Tomlin

A second-half schedule that looks — on paper anyway — not as daunting as the first half, beginning with a visit by New Orleans on Nov. 13.