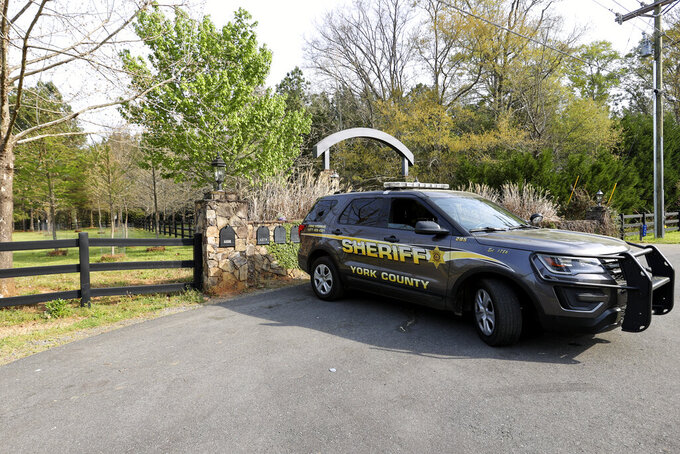 COLUMBIA, S.C. (AP) — Police were able to quickly identify a former NFL player as the primary suspect in a shooting at a South Carolina home that left six dead earlier this month because the ex-athlete left his iPhone behind at the scene, according to newly released search warrants.

The search warrants, issued in the immediate aftermath of the shooting and released to the public Friday, show that police recovered multiple projectiles and .45 caliber spent shell casings from the Lesslie home, as well as several cellphones — including an iPhone in a red case that had a phone number officers then tracked to Adams.

Police proceeded on April 7 to obtain another warrant for Adams' parents' home, about a mile from the Lesslies, citing the proximity of the two locations, the recovered cellphone and witness descriptions of the suspect. They arrived at Adams’ parents’ home later that evening, evacuated them and then tried to talk Adams out of the house. Eventually, they found him dead of a self-inflicted gunshot wound to the head.

After entering the house, police then found in Adams' room “numerous notebooks ... with cryptic writing with different designs and emblems," according to affidavit by an investigator with the York County Sheriff's Office.

"Detectives had also learned that Phillip Adams had been acting differently and possibly following a new religion or ideology,” the affidavit reads.

Documents released Friday did not elaborate on where or how detectives obtained that information.

Among the other items officers recovered at the Adams' home included several guns and various ammunition, as well as a computer and some medicine bottles. Police also sought a warrant to search a safe left behind by Adams at prior residence in Charlotte, North Carolina.

Days after the shooting, police obtained another warrant for any medical records belonging to Adams or his parents at Riverview Family Medicine and Urgent Care, where Lesslie practiced. A person briefed on the investigation who spoke to The Associated Press on the condition of anonymity because he wasn’t authorized to speak publicly has previously said that Robert Lesslie had treated Adams.

Adams' brain is now being examined for a possible degenerative disease that has been shown to cause violent mood swings and other cognitive disorders in some athletes and members of the military.

Adams’ sister had previously told USA Today that her brother’s “mental health degraded fast and terribly bad” in recent years and that the family noticed “extremely concerning” signs of mental illness, including an escalating temper and personal hygiene neglect.

As a rookie, Adams suffered a severe ankle injury and never played for the 49ers again. Later, with the Raiders, he had two concussions over three games in 2012.

Whether he suffered long-lasting concussion-related injuries wasn’t immediately clear. Adams would not have been eligible for testing as part of a broad settlement between the league and former players over such injuries, because he hadn’t retired by 2014.