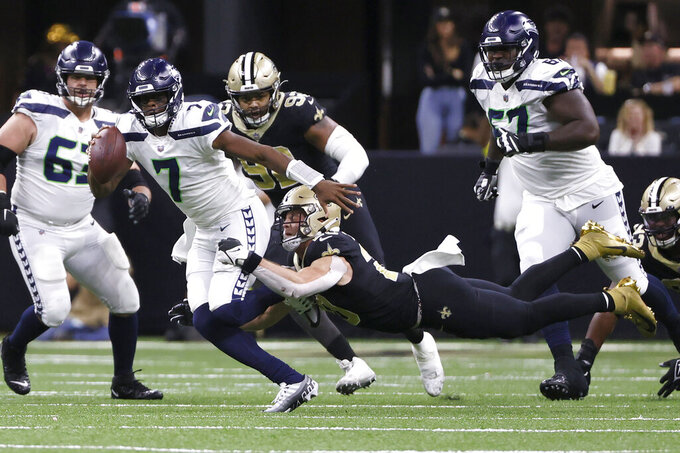 Jameis Winston may return, but is still a Tier 3 option.

This week at quarterback, there’s a clear (and large) Tier 1 and then a pretty wide Tier 2, as well. Even with bye weeks starting up, you probably won’t need to dig too deep to find a starting quarterback in 12-team leagues. That’s a nice situation to have.

The arrow continues to point up for Geno Smith. His Passing Net Expected Points (NEP) per drop-back sits at 0.28. The NFL average is only 0.06 this season, and the 0.28 mark ranks Smith behind only Tua Tagovailoa, Patrick Mahomes, and Josh Allen. That is incredible company. Smith and the Seattle Seahawks will face the Arizona Cardinals in one of the most fantasy-friendly matchups of the weekend. He’s a streaming option for sure — and might be more than that for the rest of the season.

Do we keep rolling out Matthew Stafford? It depends, of course, on the other options available to us. Stafford is at a -0.04 Passing NEP per drop-back on the season. That efficiency is worrisome. However, the Carolina Panthers are shaping up as a true funnel defense. They are the best adjusted rush defense in football, but — despite allowing just 218.4 yards per game passing — sit 23rd in adjusted passing efficiency allowed, according to numberFire’s opponent-adjusted metrics. We can likely roll out Stafford this week and get a solid game from the quarterback position in return.

Kirk Cousins is in a plush spot this week against the Miami Dolphins. Miami ranks 25th in pressure rate, 22nd in depth of target allowed, and 30th in yards per target allowed on downfield passes. numberFire’s model ranks them 26th in adjusted pass defense and 30th in passing success rate allowed, as well.

James Conner is projected for half of his usual workload. If he is deemed a full-go, he is 46% likely for a top-24 week.

Damien Harris’ partial projection initially puts him at 16%; a return to his normal workload would increase those odds to 37%.

Do we bench Najee Harris? Harris has played on 65.0% of the Pittsburgh Steelers’ snaps this season, a workload that has added up to 13.8 carries and 3.0 targets for just 58.0 scrimmage yards per game. Harris is seeing 55.6% of the team’s red zone rushes, yet that works out to just 2.0 per game. Harris is drastically underperforming on his opportunities, too. He has averaged 14.4 rushing yards under expectation per game and 1.04 yards under expectation per carry. Now, he faces the Tampa Bay Buccaneers, who aren’t quite as elite against the run as they have been in recent seasons (they’re 26th in rushing success rate allowed to opposing backs). In a traditional start-or-sit column, he’s flagged as a sit. However, the reality is that he’s still in the consider-if-needed tier despite the poor returns.

Raheem Mostert’s fantasy stock is trending up. Mostert has seen his snap rate sit at 73.3% and 67.7% the past two games, and in that split, he has averaged 16.5 carries and 3.0 targets for 101.5 scrimmage yards. He also has a 60.0% red zone rushing share in that two-game sample. You could do a lot worse than that type of role among this tier of running backs in a week where things taper off quickly.

We might be seeing a slowly developing backfield takeover for the Jacksonville Jaguars. Travis Etienne has now out-snapped James Robinson in consecutive weeks (a 52.9% to 42.9% split in that span). In that sample, the workloads aren’t great for either back: 9.0 carries and 3.0 targets for Etienne and 9.0 carries and 1.0 targets for Robinson. However, Etienne is generating 0.87 yards per carry over expectation with Robinson at a 0.01 on the season. Etienne wins out in rushing success rate (45.4% to 34.8%, via numberFire’s model), too. Robinson was looking like a lock-in level RB3 early in the season, but now we should be leaning toward Etienne and looking to downgrade Robinson when we can.

Brian Robinson is also a likely candidate for a methodical backfield takeover in Washington. Robinson’s return may push Antonio Gibson more toward special teams. Robinson had nine carries and 22 yards in his Week 5 debut, but he did that on only 16 snaps. That means he got an opportunity on 56.3% of his snaps. For context, Nick Chubb is at a 56.6% opportunity-per-snap rate on the season. Even if Robinson doesn’t see an abundance of snaps, his per-snap usage might push him over the top among the flex-tier options. It’s best to take a wait-and-see approach this week wherever possible, however.

Tyreek Hill is projected for a partial workload early on in the week. If he starts, his top-24 odds are 69%.

Tee Higgins’ partial projection puts him initially at 14%; a full workload would bump those odds to 53%.

If we look solely at healthy games, target share leaders among wide receivers are as follows: CeeDee Lamb (35.0%), Cooper Kupp (33.7%), Drake London (33.1%), Jakobi Meyers (31.8%), and Davante Adams (31.2%). Meyers has been a focal point of the Patriots’ offense in his three games. He is averaging 9.0 targets per game with an elevated 11.2-yard average depth of target. Notably, he is yet to see a red zone target. That can last only so long, especially with Damien Harris banged up. The Cleveland Browns rank 26th in yards per route run allowed to receivers and have allowed a top-five target-per-route rate to the position.

If we have Marquez Valdes-Scantling rostered, we likely have been hoping we can deploy him as a WR3 or flex option in the exciting Kansas City Chiefs offense. So far, that wouldn’t have been very fruitful, as he hadn’t broken 63 receiving yards until Monday night’s game in Week 5. That most recent outing marked season highs in targets (eight), catches (six), and yards (90) for Valdes-Scantling. Notably, Valdes-Scantling has not scored and has just an 11.1% red zone target share. He does, though, lead the Chiefs in downfield targets per game (3.0), and for as good as the Buffalo Bills have been, they’re 29th in yards per target allowed on downfield passes.

Since Romeo Doubs’ Week 3 role shift, the Green Bay Packers have had some interesting target shares. Allen Lazard leads at 21.0%, Doubs is second at 20.0%, and Randall Cobb is third at 18.1%. So, it’s been a tight contest in that regard. However, in Week 3, Doubs led with a 23.5% target share, he and Lazard tied at 25.0% in Week 4, and Cobb led at 33.3% in Week 5. It’s been a pretty up-and-down offense, and although the sims like them all to a degree, none are super-confident starts. What helps is a matchup against a New York Jets team allowing a catch rate over expectation of 7.7% to wide receivers — in case we are hoping to get the right Green Bay receiver in our lineups this week.

Kyle Pitts is projected to return for Atlanta.

Pat Freiermuth is projected for a half workload, given his uncertain status. If he is a full-go, he rates out at 44% likely to be a top-12 tight end.

Although Pitts missed Week 5′s game and is averaging just 5.5 targets per game in a low-volume passing offense, the model still likes him. The matchup against the San Francisco 49ers is pretty tough for tight ends. They’re allowing a catch rate over expectation of -8.4% and just 0.73 yards per route run against the position. I could point out the usage and matchup concerns and call him a sit, but that doesn’t help us figure out his probability of putting up a good week. It’s still higher than most tight ends odds, and that matters. Realistically, if you have Pitts and he does play, you’re plugging him in. Don’t complicate it more than that.

Evan Engram gets one of the best tight end matchups in the league this week, especially with the Las Vegas Raiders and Tennessee Titans on bye. The Indianapolis Colts are 27th in adjusted fantasy points per target allowed to the position as well as 23rd in yards per route run allowed to tight ends. Against the Colts in Week 2, Engram caught 7 of 8 targets for 46 yards. Since that game, he has a 16.3% target share, which is actually 10th-best among all tight ends.

Hayden Hurst’s role is noteworthy. Tee Higgins may not be 100% this week, and in Week 5, that led to an extended role for Hurst, who saw seven targets across 29 routes (a season-best 78.4% route rate). The matchup is difficult individually (the New Orleans Saints are third in adjusted fantasy points per target allowed to tight ends), but we could do much worse than Hurst if needed —especially for those of us looking to replace T.J. Hockenson or Darren Waller.