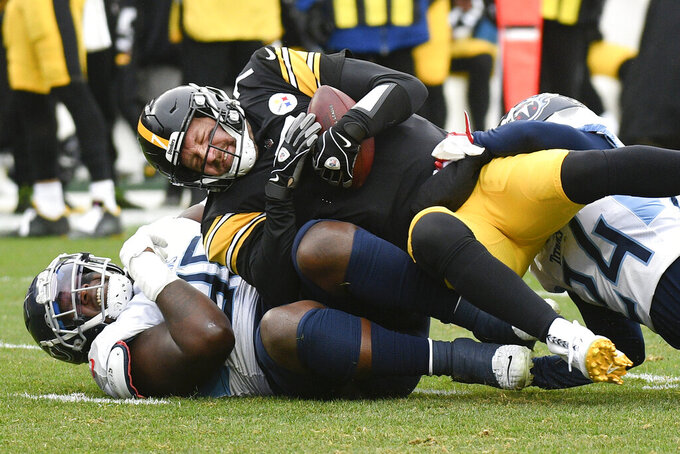 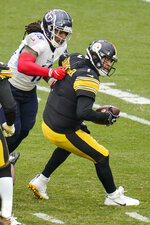 PITTSBURGH (AP) — The answer to the biggest problem facing the Pittsburgh Steelers is easy.

More specifically, the Steelers (7-6-1) have got to score more than the 19 they managed in last weekend's baffling victory over Tennessee that kept their playoff hopes alive, particularly with a trip to red-hot — if perhaps short-handed — Kansas City looming on Sunday.

“I don’t think it’s realistic to think (19 points are) going to be enough to get out of the stadium with a victory this time around,” Tomlin said.

Not with the way the Chiefs are scoring. And not with the way Pittsburgh has struggled to get stops on the road. The Steelers have allowed a staggering 39.3 points per game in losses to Minnesota, Cincinnati and the Los Angeles Chargers in their past three trips away from Heinz Field.

Expecting one of the NFL's worst run defenses to suddenly get right this late in the season is unwise. And unless star linebacker T.J. Watt and company can find a way to compensate by creating four turnovers — as they did last week against the Titans — on a weekly basis, the offense is going to have to figure out a way to get in the end zone more than just once in a while.

Pittsburgh hasn't scored a point in the first quarter in a month, and that was a Chris Boswell field goal in what quickly snowballed into a 31-point loss to the Bengals. The Steelers have failed to score a first-half touchdown in four straight games, the first time that's happened in more than a quarter century.

While quarterback Ben Roethlisberger and offensive coordinator Matt Canada have figured a way to get it going eventually — Pittsburgh is second in the NFL in points in the fourth quarter — most of that production has come with the Steelers in full-on desperation mode against defenses focused more on keeping the clock moving than getting stops.

“We just got to find a way to get in the end zone,” Roethlisberger said Wednesday. “We can’t beat ourselves with penalties or negative plays. That’s a big key to scoring early.”

A key the Steelers have been unable to unlock until they're trailing, sometimes by margins far too large to make up. The growing pains Roethlisberger anticipated in September while playing behind an almost completely retooled offensive line has lingered nearly to Christmas. He has been sacked 33 times already, and rookies such as center Kendrick Green have endured a learning curve that has proven remarkably steep at times.

Green has struggled with overshooting shotgun snaps to Roethlisberger, getting pushed back by nose tackles in pass protection and playing at a high level consistently. It's been much the same for rookie left tackle Dan Moore Jr.

Which is one of the reasons Roethlisberger made it a point to go to Green this week and thank him for fixing the snapping issues that plagued him in a loss to Minnesota two weeks ago. Green went without a glove on his right hand and took a little bit off his snaps in an effort to prevent the ball from sailing over Roethlisberger's head. It worked.

Of course, that's just one facet of Green's job. He's also got to get the snap off in time, something that was an issue while playing indoors on the road against the Vikings.

Several times Roethlisberger would be begging for the ball to be snapped as the play clock wound down while waiting for Green — who couldn't hear his quarterback — to get a tap from right guard Trai Turner in what Roethlisberger described as a game of “telephone.”

“It's just kind of not being on the same page and stuff we've got to work through,” Green said.

The lines will need to get uncrossed in a hurry if the Steelers want to pull off an upset that would give their postseason chances a massive shot. Better play up front early in games means more time for Roethlisberger, more room for running back Najee Harris and more opportunities to keep the wildly erratic defense off the field.

Then again Roethlisberger — who has become a de facto coach in his 18th season — is quick to point out that he will take racking up a meager 168 yards as the Steelers did while beating the Titans over whatever gaudy statistics he might accumulate in a game that ends with his team on the wrong side of the final score.

“At the end of the day, yeah, you’d love to put up 9,000 yards of offense in a game, but it doesn’t matter if you don’t win the game,” Roethlisberger said.