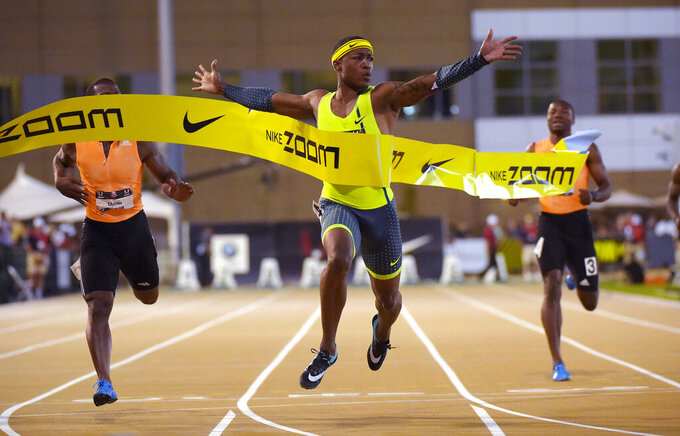 FILE - Mike Rodgers, center, wins the men's 100 meters ahead of Charles Silmon, left, and Mookie Salaam at the U.S. outdoor track and field championships in Sacramento, Calif., in this Friday, June 27, 2014, file photo. Seattle Seahawks wide receiver DK Metcalf has accepted an invitation to run the 100 meters at the USA Track and Field Golden Games in Walnut, California, to test his speed. "It's a pride thing for track athletes," Olympic sprinter Mike Rodgers said. "We've been hearing about this for so long. So giving him a proper introduction to track is going to be everything to everybody in the track world." (AP Photo/Mark J. Terrill, File)

The newest sprinter in the game is tall just like world-record holder Usain Bolt and has quite an explosive burst — off the line of scrimmage, anyway.

DK Metcalf will soon see just how quick he is from a different line, the starting line.

The speedy Seattle Seahawks receiver is scheduled to trade his football cleats for track spikes Sunday as he ventures into a new, faster lane for a 100-meter competition at the USA Track and Field Golden Games in Walnut, California.

He will put his feet to the test against Olympic-caliber sprinters. It's a decision that definitely caught the attention of the track world, where athletes have for years been challenged by anyone, in any sport, who just happens to be fast.

This may be their chance to show, once and for all, that track speed is far different from football fast.

“There’s not a sprinter in the world who will let this guy think he can run with them. They will destroy him,” said track agent and former 110-meter hurdler Renaldo Nehemiah, who also played three seasons with the San Francisco 49ers. “It’s a noble gesture but an exercise in futility. It really is. No offense to DK, I’m a fan of his.

"I applaud him for wanting to find out — and find out he will.”

But what really got people buzzing about Metcalf's blazing speed was when he chased down Arizona defensive back Budda Baker from behind after an interception to prevent what seemed to be a sure touchdown last season. Metcalf made up nearly 10 yards on Baker and reached a top speed of 22.64 mph in pads and cleats. He ran 108.8 yards on the play to tackle Baker short of the end zone.

“That was one of the best football plays I’ve ever seen,” Seahawks coach Pete Carroll said after the game.

“But if you put a world-class track athlete in the same spot, he would be 10 meters in front of Baker and waiting for Baker,” Nehemiah said. “People just don’t understand world-class speed."

The speed of a sprinter is more linear, with mechanics and transitions focused on being as straight as possible. The speed of a football player tends to be more horizontal, and centered around quick five- to 10-yard bursts.

“I hope he doesn’t think he’s getting out here with some average Joes,” said 2016 Olympian Mike Rodgers, who will be one of the favorites in Sunday's 100-meter race, where the top runners in round one advance to the final. “It’s a pride thing for track athletes. We’ve been hearing about this for so long. So giving him a proper introduction to track is going to be everything to everybody in the track world.”

For decades, track standouts have been challenged by the speediest athletes in other sports. Like Hall of Fame receiver Terrell Owens trying to set up a friendly competition with 2004 100-meter Olympic gold medalist Justin Gatlin, who's still in elite form at 39 and among the favorites to make the team for the Tokyo Games.

It simply comes with the territory. Everyone wants to see how they measure up in a race.

Metcalf recently tipped his hand — or feet — by walking by in a video posted on social media and dropping a pair of spikes on the track. He's listed in the field Sunday.

Although a hurdler, Nehemiah was challenged to races while a receiver for the 49ers from 1982-84. He also was told to slow down by his teammates during practices.

“The guys used to get mad at me in wind sprints, because I was leading by so much and it made them look bad,” said Nehemiah, who had 43 catches for 754 yards and four TDs in 40 games with the 49ers. “I’m like, ‘I’m not even running, just jogging.’”

Rodgers will be impressed should Metcalf break 10.2 seconds. If he doesn’t run faster than 10.5 then, well, “football players should have no business having a conversation with us,” Rodgers cracked.

Metcalf would need to record 10.05 or better to earn an automatic invitation to the U.S. Olympic Trials next month in Eugene, Oregon.

He's about 20 pounds heavier than Bolt was in his record-setting prime. The Jamaican sensation also powered his way to the 200-meter world record (19.19).

“DK's a big guy. If he gets a good start and gets rolling, he might break 10.3,” the 36-year-old Rodgers said. “But he's not going to be in his environment for sure this weekend.

"He could be in warmup and see us warming up and be like, ‘Oh no, I’m not racing these guys.’ He could pull one of those. Until he lines up, there's nothing really I have to say. He's in the race. I hope he comes out and competes.”