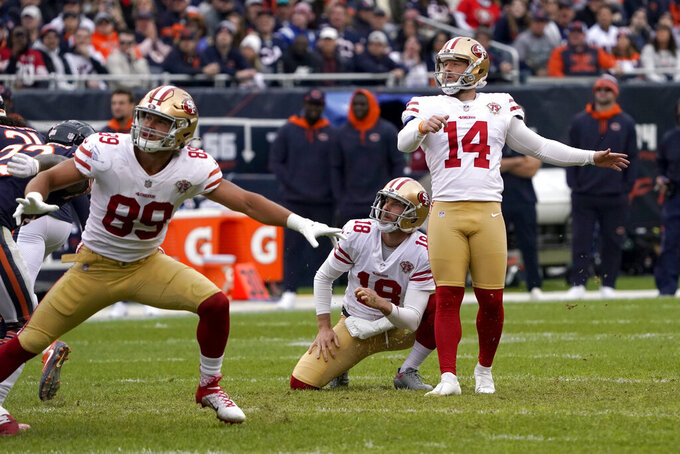 CHICAGO (AP) — Playing about 30 miles from where he grew up, Jimmy Garoppolo had no trouble making himself at home.

Garoppolo threw for 322 yards and ran for two touchdowns, and the San Francisco 49ers beat the short-handed Chicago Bears 33-22 Sunday to snap a four-game losing streak.

Garoppolo led three touchdown drives in the second half and another possession that ended with a field goal. He scored from the 2 in the third quarter and ran it in from the 5 in the fourth, tossing the ball into the crowd after he lifted San Francisco to a 30-22 lead.

“My college roommates were sitting in that end zone, so hopefully one of them caught it,” said Garoppolo, who is from suburban Arlington Heights and played college ball at Eastern Illinois. “It was so much emotion. I'm not used to really running them in like that to begin with, so when it does happen, it was pretty cool.”

In his only other appearance at Soldier Field, Garoppolo led San Francisco to a win in 2017. The veteran delivered in a big way this time, with plenty of friends and family on hand, and might have quieted the calls for rookie Trey Lance.

“Coming back home, in front of his fans, his back was against the wall, just like everybody else in the building," coach Kyle Shanahan said. "For him to step up and play the way he did today was huge.”

Deebo Samuel had six catches for 171 yards. That gave him 819, breaking Hall of Famer Jerry Rice’s club record of 781 through the first seven games of a season set in 1986.

Elijah Mitchell carried 18 times for 137 yards and a touchdown, helping San Francisco (3-4) win for the first time since beating Detroit and Philadelphia on the road to start the season.

“We’ve had a lot of talks and meetings, everything just leading up to this game," said Nick Bosa, who had two of San Francisco's four sacks. "It’s all good, but it matters what you do out on the field.”

Chicago (3-5) was looking for a reprieve coming off back-to-back losses to Aaron Rodgers and Green Bay and Tom Brady and Tampa Bay. But the Bears faltered in the second half against Garoppolo.

It didn’t help that top pass rusher Khalil Mack missed his first game since 2018 because of a foot injury. Coach Matt Nagy was away from the team after testing positive for COVID-19, and special teams coordinator Chris Tabor filled in for him.

“You can’t let that impact your day," quarterback Justin Fields said. "You can’t focus on that. You’ve got to focus on who’s here and focus on the now. Of course it was tough not having Coach.”

Fields threw for 175 yards and a touchdown. The rookie also ran for 103 yards and a score, becoming the first Bears QB to rush for 100 yards in a game since Bobby Douglass in 1973.

Cairo Santos made three field field goals to run his club regular-season record to 38 consecutive conversions. But he missed an extra point after Fields’ electric 22-yard touchdown run in the fourth.

That happened after Mitchell plowed in from 5 in a rugby-like scrum, and Brandon Aiyuk caught the 2-point conversion less than a minute into the fourth, giving San Francisco a 23-16 lead.

Fields then spun away from at least two defenders, avoided a few more and got a huge block by Jason Peters against Fred Warner on that 22-yard touchdown. But Santos was wide right on the extra point, keeping San Francisco on top with 9:32 left.

“I’m not gonna lie, that was awesome,” Fields said. “I was excited, as y’all could see.”

Tabor said he was disappointed not to get the win for Nagy. But he felt “extremely comfortable” running the team in his absence.

“At the end of the day we’re football coaches leading men to do something, to get something accomplished,” Tabor said.

49ers: S Jimmie Ward (quad) exited in the fourth quarter with an injury Shanahan said is a “pretty big concern.” ... Warner was evaluated for a concussion and cleared after being shaken up on Peters' block on Fields' TD run.

Bears: S Eddie Jackson (hamstring) clutched his leg and walked gingerly off the field after he was hurt defending Aiyuk on a long incompletion on the game's second play from scrimmage. ... RB Damien Williams (knee) was hurt in the first quarter. ... TE J.P. Holtz entered the concussion protocol after he was hurt making a tackle on a punt return near the end of the game. ... DT Akiem Hicks (groin) was active after missing two of the previous three games.