Garrett, Rudolph in no mood to rehash career-altering brawl 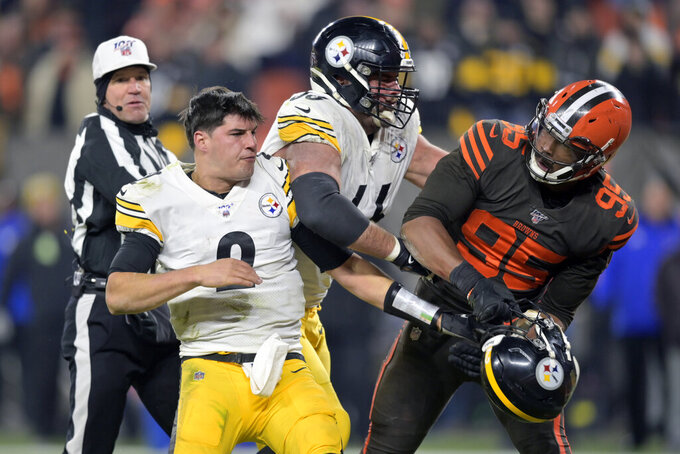 FILE - In this Thursday, Nov. 14, 2019, file photo, Cleveland Browns defensive end Myles Garrett (95) reacts after swinging a helmet at Pittsburgh Steelers quarterback Mason Rudolph (2) in the fourth quarter of an NFL football game in Cleveland. The Browns (10-5) will make the postseason for the first time since 2002 with a win over the Steelers. Pittsburgh, which clinched the AFC North last week, is resting quarterback Ben Roethlisberger and will start Mason Rudolph, who has a history with Cleveland's Myles Garrett after an ugly helmet-swinging incident a year ago. (AP Photo/David Richard, File)

PITTSBURGH (AP) — The scene is forever ingrained in whatever becomes of Myles Garrett and Mason Rudolph's respective NFL careers.

Thirteen months removed from the ugly brawl in Cleveland that both players have painstakingly tried to move past, their paths will cross again on Sunday. Rudolph starts in place of Ben Roethlisberger as the AFC North champion Steelers (12-3) visit Garrett and the Browns (10-5).

Neither Garrett nor Rudolph has any intention of rubbing their fingers over the emotional scars of the fight that ended with Garrett ripping of Rudolph's helmet, then hitting him with it in the waning seconds of Cleveland's 21-7 in November 2019. There's too much at stake.

The Browns can end an 18-year playoff drought with a victory. A solid performance by Rudolph would quiet — at least momentarily — concerns about his long-term viability as Roethlisberger's eventual successor.

“This game is too big to worry about anything external that happened years ago,” Rudolph said Friday.

If only it were that simple.

The moment Garrett swung Rudolph's helmet at the quarterback's exposed head, their exchange transcended sports. Garrett's allegation in the aftermath that Rudolph uttered a racial slur only heightened the tension even as the NFL found no proof to substantiate Garrett's claim. Rudolph weighed legal action while vehemently defending himself.

The NFL suspended Garrett indefinitely and fined Rudolph, who was benched at halftime a week later following a shaky performance against the Bengals. While Rudolph declined to place the blame for his demotion on the white-hot spotlight, he's aware it's been more than a year since he played in a meaningful moment.

“I think to look at this as anything (like) an opportunity to prove yourself to your teammates and coaches is silly,” Rudolph said. “I don’t want to make it too big. It’s a great chance to score some points and try to win a ballgame.”

Rudolph threw four picks while getting drilled repeatedly on national television last time at Cleveland — a place where the lasting image of Rudolph's still fledgling career is of him screaming at Garrett while being restrained by teammates after getting clubbed with his own helmet.

Asked if there has been any contact between his camp and Garrett's during the interim, Rudolph said no. He added he has “a lot of respect” for Garrett and would welcome any pregame interaction Garrett might initiate.

The idea of some sort of detente seems remote. While Garrett said if Rudolph wanted to talk he would “go with the flow” it's more likely any meeting would come when Garrett's No. 95 bears down on Rudolph's No. 2 in the middle of a play. In that moment, their rocky past won't matter.

“Get out of here with that," Garrett said. "That won’t run through my mind at all. He’ll get hit just like everybody else. I’m not going to put a pillow underneath his head before I take him to the ground. But I’m not going to do anything extra. It’s just a game. It’s a Steelers game. It’s a divisional game. It’s an important game. But going against him, it changes nothing for me.”

The perception of Garrett — both internally and externally — appears to have evolved over the last year-plus. The Browns signed him to a $125 million extension in the offseason and selected him as t heir Walter Payton NFL Man of the Year nominee for his charitable work in the community. He's in the running for the NFL Defensive Player of the Year Award thanks to a season that includes 12 sacks and four forced fumbles despite missing two games due to a bout with COVID-19.

Cleveland will make Garrett a captain for arguably the franchise's biggest game since it returned in 1999. Browns coach Kevin Stefanski stressed the opponent is a coincidence.

“I do not want that to be misconstrued," he said. "It is a big game so I am sending the big guy out there, but it is in no way a call back to anything previously, so I just want to make sure that is clear.”

And Rudolph wants to make it clear he has no interest in rehashing one of the league's darkest moments in recent memory. He has one year remaining on the rookie deal he signed after being taken in the third round of the 2018 draft. With Roethlisberger under contract for 2021, this may be one of Rudolph's last opportunities to prove he can be a starter, whether it's in Pittsburgh or elsewhere.

“I see myself as (a starter) and I think there are plenty of quarterbacks who have sat behind Hall of Fame quarterbacks and it has benefited them down the road,” Rudolph said.

Sunday's trip to Cleveland can serve as a progress report of sorts for Rudolph and a chance for Garrett to help lead the Browns to the playoffs for the first time since 2002. The video of their encounter will always be at the ready whenever they find themselves on the field together. It can inch a bit further into the rearview mirror, however, by keeping the action between the whistles, not beyond them.

“It is a division opponent, a rival opponent that we know well,” Rudolph said. “Outside of that, I really could care less who the opponent is. It’s big for me, regardless.”