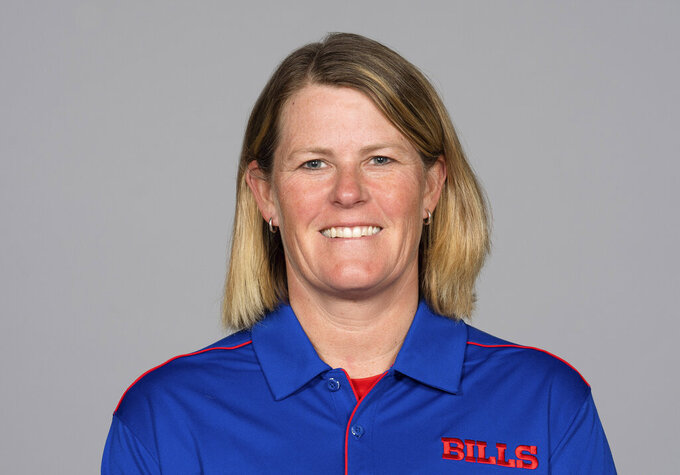 FILE - Laura Young poses for a photo in 2019, when Young was on the staff of the Buffalo Bills NFL football team. New York Giants coach Brian Daboll filled out a majority of his staff Friday, Feb. 11, 2022, hiring the first woman to hold a coaching position in the team’s history along with a pair of coordinators new to New York. Among those announced to join the recently hired Daboll was Young, who will be the team’s director of coaching operations, coordinating and organizing practices, as well as game-day operations. (AP Photo, File)

The team announced the moves Wednesday with the releases cutting $7.1 million from the salary cap and leaving New York still $5 million over it with free agency scheduled to start in roughly two weeks.

New coach Brian Daboll announced Angela Baker has joined his staff as the inaugural recipient of the Rosie Brown Minority Coaching Fellowship. Baker will be the offensive quality control coach.

The fellowship is named in honor of Hall of Famer Rosie Brown, arguably the best offensive lineman in Giants history.

Shortly after replacing Joe Judge, Daboll hired Laura Young as the team’s director of coaching operations. He had worked with her in Buffalo.

A former receiver, Baker spent the 2021 season at the University of Redlands as a defensive quality control coach. She also worked with kickers and punters.

In the spring of 2020, Baker spent three weeks with the Cleveland Browns' coaching staff as part of the NFL’s Bill Walsh Diversity Coaching Fellowship program.

Baker was a seven-time Women’s Football Alliance (WFA) All-American while competing for the Pittsburgh Passion Women’s Professional Football Team as a slot receiver.

Knox spent the 2020 season with the Giants as a football data and innovation intern.

Rudolph, who played one season with the Giants after being signed as a free agent, thanked Giants fans and ownership and admitted the season (4-13) didn't go as hoped.

The Giants started this month $12 million over the salary cap. The release of the 32-year-old Rudolph saved $5 million and the cutting of Booker took away another $2.1 million.

Rudolph had 26 catches for 257 yards and a touchdown in his 11th season. The former Minnesota Viking was signed to also help the offensive line with his blocking, but injuries decimated the line and the running game struggled all season.

Booker, signed by the Giants last March, played in 16 games with four starts in his sixth NFL season. He tied Saquon Barkley for the team rushing lead with 593 yards.

Booker was third on the team with 40 receptions for 268 yards. He ran for two TDs and caught one.