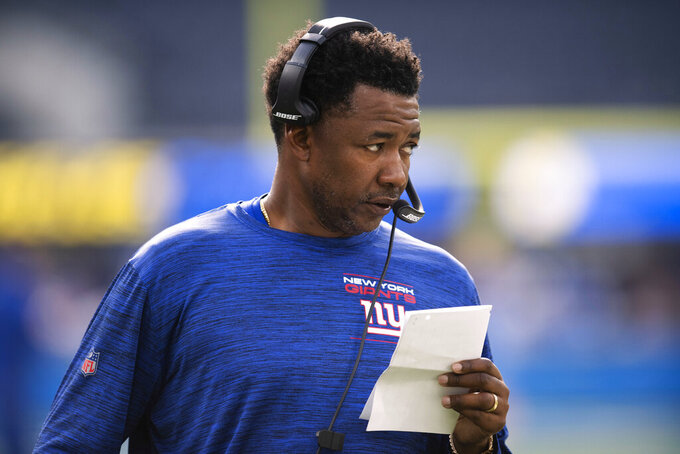 FILE - New York Giants defensive coordinator Patrick Graham stands on the field before the team's NFL football game against the Los Angeles Chargers on Dec. 12, 2021, in Inglewood, Calif. Graham the Christmas season, except during football season. While that may sound bah-humbug-ish, Graham insists Christmas doesn't bring out the Scrooge in him. It's just that his workaholic approach dampens the mood a little. (AP Photo/Kyusung Gong, File)

EAST RUTHERFORD, N.J. (AP) — Pat Graham is one of the those cheery characters who always seems to have a smile on his face, and it just gets bigger around Christmas.

The New York Giants' defensive coordinator loves the season, except during football season.

While that may sound bah-humbug-ish, Graham insists Christmas doesn't bring out the Scrooge in him. It's just that his workaholic approach dampens the mood a little. The game plan may be drawn up on a Monday or Tuesday, but it's always a work in progress, which is something he learned on the Patriots' staff with Bill Belichick running the show.

Graham may even be tinkering with it on Sunday morning before the Giants (4-10) take the field at Lincoln Financial Field against the Philadelphia Eagles (7-7).

“To me, you just keep working, trying to find a way. Watch the tape, keep grinding through the tape. It’s not about being unprepared early in the week, it’s just you keep just diving into the tape,” Graham said. “For me, I’m constantly just keep looking at it even the night before.”

Graham recalled a game with New England where he decided to switch some things the day of the game. It was against the Eagles.

“We came out of warm-ups and changed the call we never ran before, and we played it in the game the first series,” he said. “I mean stuff like that, so I grew up learning that stuff. Definitely, I’ll take it down to the last — as long as you prepare the guys to be able to handle that stuff. I think you’ve got to look ahead early on in the process. Are they ready? Are they adapting? Are they really following that adapt-or-die model that we talk about?”

Safety Logan Ryan, who played for New England when Graham was on the coaching staff, said Graham never stops working.

“A little Grinch when it comes to those things, but it’s the truth,” Ryan said. “That’s Pat. He works and works and works and that’s what he’s known for, and it’s worked out well for him. I know his wife, Pam, he’s got a beautiful family and they have more of a family dynamic and he’s a great father than he may let on. I want to see what Pam has to say about that.”

Graham's defense shut down the Eagles in a 13-7 win at MetLife Stadium on Nov. 28. Jalen Hurts completed 14 of 31 passes for 129 yards and was intercepted three times. The negative was Philadelphia did what it does best. It ran for 208 yards of its 332 yards in total offense.

Being an old D-line coach, Graham loved the win and hated the Eagles' success on the ground.

“I don’t want to concede that in any way shape or form,” he said of the rushing yardage. “Absolutely not. Now, I want the win more than anything and if they run for 400 yards and we win, I’ll smile probably about for a few minutes then I’ll be upset for the rest of the day.”

NOTES: Coach Joe Judge went the week without saying whether veteran Mike Glennon or second-year pro Jake Fromm will start Sunday. Glennon started for Daniel Jones (injured reserve-neck) the past three games without success. Fromm came in the last series against Dallas and moved the team 84 yards before his drive stalled. ... LB Oshane Ximines and DB J.R. Reed were activated off the COVID-19 list on Friday. WR Kadarius Toney also came off the list this week. They were listed as questionable. ... G Ben Bredeson (ankle), WR Collin Johnson (hamstring) and RB Gary Brightwell (neck) are all out for the game.