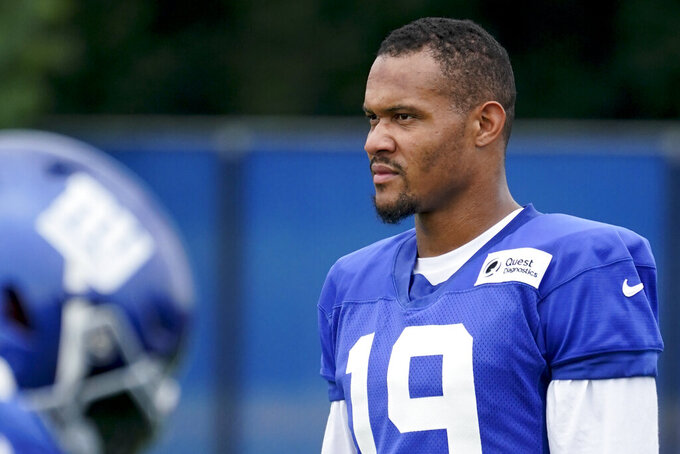 STRENGTHS: Saquon Barkley is looking like the young back who came out of Penn State in 2018 and tore up the NFL. He is also benefitting from an improved offensive line that has young bookend tackles in Andrew Thomas and Neal and added Feliciano and Glowinski. The defensive line has two excellent players in Leonard Williams and Dexter Lawrence, who has stepped up in his fourth season. Coordinator's Wink Martindale's pressing defenses may give opponents fits. Placekicker Graham Gano is among the best in the league, although he sustained a concussion in a preseason game against the Bengals.

WEAKNESSES: This is a make-or-break year for quarterback Daniel Jones after the team did not pick up his fifth-year option. He has been the same old ‘D.J.’ in Daboll's offense in camp. Taylor is waiting in the wings. The cornerback spot is shaky with Bradberry released in a salary-cap move. Aaron Robinson has replaced him, but he had a very tough opening preseason game. Veteran Darnay Holmes, Flott and free agent Darren Evans are options. Overall the biggest issue is depth. There are some very good players, but the gap to the next level is deep.

CAMP DEVELOPMENT: Thibodeaux and Neal have settled in nicely and should start in the season opener at Tennessee on Sept. 11. The only glitch is Thibodeaux had an MCL injury to his right knee against the Bengals and his status is uncertain. There are also concerns about the veteran receivers. After a horrible first season with the Giants, Kenny Golladay isn't showing a lot in camp. 2021 first-round pick Kadarius Toney, who missed seven games as a rookie, is again having problems staying on the field. Sterling Shepard (Achilles tendon) came off the PUP list on Aug. 24 and won't have much time to be ready for the start of the season. The good news is young receivers Alex Bachman and David Sills have shown flashes. Collin Johnson would have been in that category, but he tore an Achilles on the day Shepard returned and was placed on injured reserve.

FANTASY PLAYER TO WATCH: If Barkley stays healthy and the line continues to play well and stays healthy, No. 26 is going to excel in this offense. He has run hard and is showing the confidence that allowed him to rush for 1,307 yards and 11 touchdowns as a rookie. He also is a playmaker in this offense and his receptions will increase. Maybe it won't be as many as 91 like in 2018 but he will be a factor.

EXPECTATIONS: Not high. The Giants have had five straight losing seasons and Daboll is the third new coach hired to change things, following Pat Shurmur (2018-19) and Joe Judge (2020-21). Nobody is going to be fooled again with the expectation of immediate improvement. Schoen has cleared up the cap mess in his first season and signed a few good free agents. Still, there aren't enough good players and Jones hasn't shown he can be a top quarterback. A sign of improvement would be more wins than last season, but a sixth straight losing season is a distinct possibility.