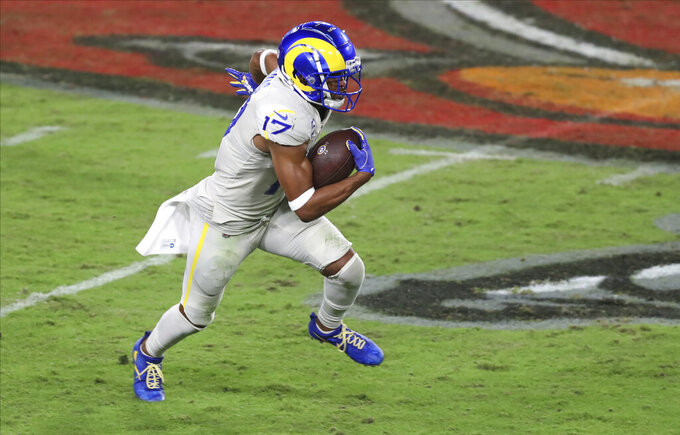 Los Angeles Rams wide receiver Robert Woods (17) runs after a catch against the Tampa Bay Buccaneers during the first half of an NFL football game Monday, Nov. 23, 2020, in Tampa, Fla. (AP Photo/Mark LoMoglio)

“We can be as good as we want to be, honestly,” the fifth-year quarterback said after Monday night's 27-24 victory over Tom Brady and the Tampa Bay Buccaneers. “We’ve got it all in front of us. Everything is there for us to take.”

Goff threw for 376 yards and three touchdowns, and Matt Gay kicked a 40-yard field goal with 2:36 remaining to lift the Rams back into first place in the NFC West.

Goff threw a pair of interceptions, too, helping the Bucs remain close in the second half.

But when the Rams (7-3) needed him to stand tall, he rebounded to lead them right down the field to retake the lead after Brady tied it with his second TD pass.

"I’ve always believed in myself in any situation, but when you actually do it in a tough environment, it makes you feel good," Goff said.

“Jared just continued to demonstrate resilience,” Rams coach Sean McVay said. “I love the fact he was outstanding from the jump. We had that one little mistake, and he just kept competing. What he did in terms of leading us down the field at the most important moment was critical.”

Cooper Kupp had 11 receptions for 145 yards and Woods finished with 10 catches for 130 yards. Both caught passes on the eight-play, 53-yard drive Goff led to move Los Angeles into position for Gay’s winning kick.

Brady was 26 of 48 for 216 yards and two touchdowns. The Rams sacked him once after getting to Russell Wilson six times in the previous week's 23-16 victory over the Seattle Seahawks.

“Disappointed. I have to do a better job," Brady said.

Tampa Bay was limited to a touchdown and field goal in the second half, both set up by interceptions thrown by Goff.

“They did a good job preventing (the big play),” Brady said. “They play a defense that makes them tough to hit. Not impossible, but we didn’t hit any.”

Gay, a 2019 Bucs draft pick who was released after a rookie season marked by inconsistency, is the Rams’ third kicker in four weeks.

“I found out on Monday that the Rams were bringing me in,'' Gay said. ”It was a quick flight so I could begin testing so I could be eligible for the game. Saturday was the first day I could be in the building. Luckily we played Monday night."

The Bucs (7-4) fell to 1-3 in four prime-time games despite avoiding the type of slow start that hurt them in losses to the Chicago Bears and New Orleans Saints and nearly cost them in a narrow victory over the New York Giants.

“Everybody is disappointed. Everybody was ready to play," Arians said. "We played a good football team. Nobody’s head is down.”

Goff threw first-half TD passes to Woods and Jefferson, then used Woods’ 20-yard catch and run to the Tampa Bay 20 to set up Gay’s 38-yard field goal as time expired to give Los Angeles a 17-14 lead at halftime.

With the Bucs trailing 24-17, Brady took advantage of Goff throwing his second interception of the night. Chris Godwin’s 13-yard TD catch made it 24-all, setting the stage for Goff to move the Rams downfield for the go-ahead field goal.

Fuller, a sixth-round draft pick who came off injured reserve last week, ensured Los Angeles improved to 32-0 when leading at halftime under McVay.

“I was just in my zone, and the quarterback ended up throwing it in my direction,” said Fuller, who interestingly — like Brady — was selected 199th overall in the draft.

An all-Black officiating crew worked an NFL game for the first time in league history.

The members of Monday night’s officiating crew have a combined 89 seasons of NFL experience and have worked six Super Bowls.

The first Black official in any major sport was Burl Toler, hired by the NFL in 1965.

Rams: Did not announce any injuries during the game.

Buccaneers: LG Ali Marpet missed his third consecutive game due to a concussion. ... LT Donovan Smith injured his left ankle on the first offensive play of the game, but returned. ... CB Jamel Dean left in the third quarter with a concussion.