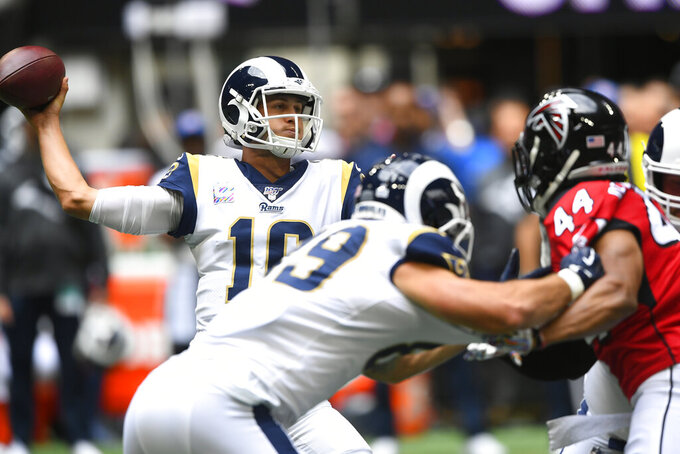 Los Angeles Rams quarterback Jared Goff (16) works in a bust pocket against the Atlanta Falcons during the first half of an NFL football game, Sunday, Oct. 20, 2019, in Atlanta. (AP Photo/John Amis) 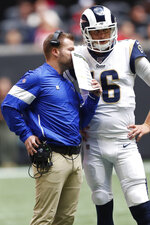 ATLANTA (AP) — Jared Goff loved getting a chance to throw on the run last week and the two-time Pro Bowl year quarterback hopes it's a new trend for the Rams' offense.

"I think it was just the flow of that game and the way Sean wanted to call things," Goff said Wednesday. "I do like it. It gets you some easy completions and gets the ball out on the edge to our skill players. It is a big part of our offense and it worked for us on Sunday."

It certainly helped that the Rams' 37-10 blowout came against a Falcons unit that ranks at or near the bottom of most defensive categories. The Bengals (0-7) aren't much better, ranking worst in yards per game and eighth-worst in points allowed.

The Rams are practicing in Atlanta for a couple of days before flying to London, and Goff likes that the offense is using the time away from home to enhance the playbook.

Passing game coordinator David Waldron said Goff was particularly effective on play-action keepers as he broke containment, got out on the edge of the defense and still had time to set his feet and follow through on his throws.

The Rams have always had such options in their playbook under McVay, but they were able to take advantage of them with the Falcons' lack of pass rush.

"I think the only difference is that the whole defense is kind of moving with you so that windows come open at different times," Goff said. "It's very similar to when you're in the pocket."

Bottled up the week before in an ugly home loss to San Francisco, Goff passed for 268 yards and a pair of touchdowns to running back Todd Gurley and tight end Gerald Everett. His fun-reel highlight, faking out linebacker Deion Jones, came on a 1-yard touchdown run. Goff spiked the ball for effect.

The Rams were an offensive juggernaut on their way to winning the NFC title last season. They're a bit off so far this season. Losing to the 49ers showed the unit at its worst. Goff passed for a career-low 78 yards, the running game struggled as Gurley missed the game with a thigh bruise and the line lost right guard Joe Noteboom to a season-ending injury.

"Jared's athleticism is something we want to take advantage of, but that's kind of our core philosophy in terms of how we want to operate," McVay said. "I thought you saw especially on that first drive, the one that ended up working the backside end cut to Cooper (Kupp), good movement in the pocket. They went to a three-man rush. Rob (Havenstein) did a great job of pancaking his guy, and Jared kind of felt where the rush was, moved around and really worked all the way through his progressions."

Goff did some fine work in the pocket, too. His 13-yard TD pass to Gurley was a perfect read , and Goff lofted the ball into a perfect spot for Gurley to make an over-the-shoulder catch.

"I thought it was a great throw," McVay said. "At the time, he recognized the man coverage where (defensive end) Vic Beasley is peeling on him from an inside rush. To be able to just get that ball up and down long enough knowing that he can't leave it floating all day because Todd's going to end up running out of bounds and then there's a post safety coming up over the top.

"It was great touch, great trajectory and it was really a great play by both those guys."