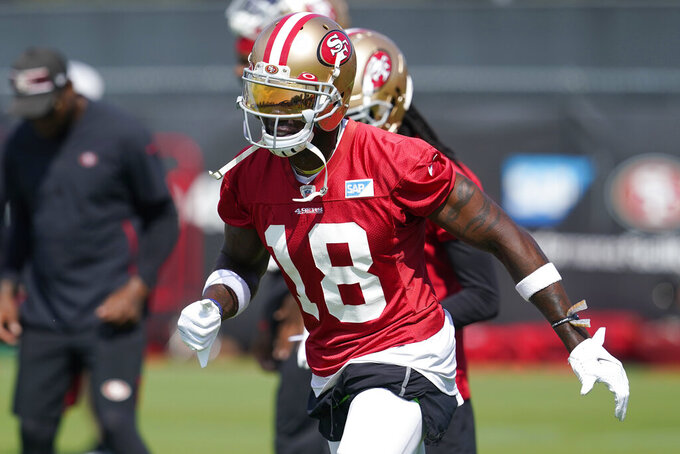 SANTA CLARA, Calif. (AP) — Mohamed Sanu is thrilled to have a second chance with the San Francisco 49ers.

His fellow wide receivers might be even more excited to have their favorite resource back.

“I love Mo,” Brandon Aiyuk said. “Mo is somebody that I gravitated toward early, from the first day he came into the building last season.”

Added Deebo Samuel: “Me and (Aiyuk) were kind of upset last year when they cut Sanu because he was the vet in the room. He’d been in there for a while. He teaches us the ins and outs of the game, not only just football.”

The 49ers released Sanu last season just a few weeks after they signed him, but the veteran understood it was just business. So when the team made him another offer this offseason, he didn’t hesitate to take it.

“I just love the team and organization,” Sanu said. “I knew it wasn’t anything personal and I knew how everything was planned out. I wasn’t at my best, still coming off that ankle injury, getting all the way back to myself.”

'That ankle injury’ was actually a significant high ankle sprain suffered during the 2019 season while a member of the Atlanta Falcons. The ailment continued to bother him through all of last season, and Niners coach Kyle Shanahan could tell this wasn’t the Sanu he remembered from their time together in Atlanta.

“It was tough because of how much respect I have for Mo,” Shanahan recalled. “And he wasn’t at his best at that time.”

Sanu underwent ankle surgery in March and has looked and felt like a completely different player since.

“Sanu told us he was good to go and we believed him,” Shanahan said. “And we got him here in OTAs and we could see it. I think you ask our players and anybody who’s watched him here, it looks like the guy I remember, and not the guy that we had for that week and a half or whatever it was.”

Now entering his 10th NFL season, Sanu has already made a noticeable impact at 49ers training camp. In addition to his impressive on-field performance, he has provided valuable leadership for the team’s relatively inexperienced receiving corps.

Added Sanu: “I love showing the guys how to take care of business, how to be a pro. Some of them don’t have that understanding yet and they come to me asking questions and I give them all of the answers that I can.”

Of course, Sanu plans to do more than just teach this season. The 31-year-old believes he still has plenty left in the tank and wants to contribute to San Francisco’s passing attack, potentially as the No. 3 receiver.

“I think we’re all competing hard,” Sanu said. “It should be fun. Whoever ends up being that guy — and I’m fighting for it, too — we’re going to do a great job.”

NOTES: Samuel (groin tightness) was held out of Tuesday’s practice, but worked out on the sideline. ... WR Jalen Hurd participated in team drills for the first time as he continues to recover from a torn ACL. ... LB Azeez Al-Shaair will miss a few weeks after spraining his right knee in Monday’s practice. “No long-term thing. His ACL is fine,” Shanahan noted. ... CB Tim Harris Jr. (groin) will also miss a few weeks, while fellow CB Dontae Johnson (foot) is considered day to day.