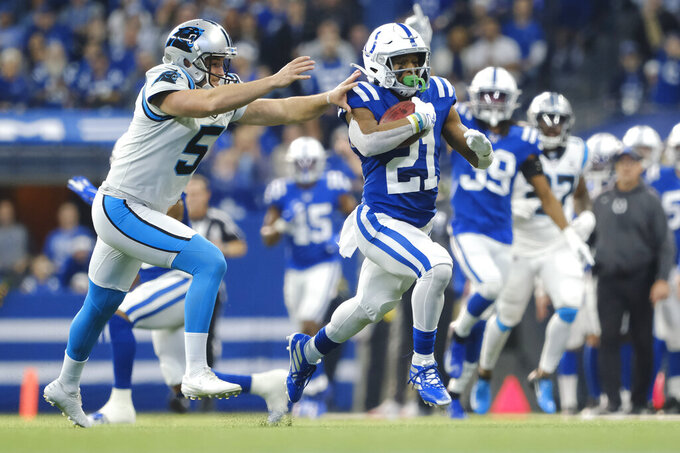 Indianapolis Colts running back Nyheim Hines (21) runs a punt back for a touchdown past Carolina Panthers punter Michael Palardy (5) during the first half of an NFL football game, Sunday, Dec. 22, 2019, in Indianapolis. (AP Photo/AJ Mast) 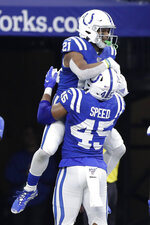 He's trying to make sure the opportunity doesn't slip away again.

Hines became the first NFL player in seven years to score on two punt returns in the same game, set up a third touchdown with another long return four plays into the game and gave the Colts a jolt of energy as they pulled away from Carolina 38-6.

“We always knew Nyheim was our backup guy, we believed in him," coach Frank Reich said. “But (in the locker room) he said, ‘I struggled when I got here last year, I did not handle it the way I wanted to in the preseason.' Obviously, Chester (Rogers) handled it well. But our confidence was growing in him.”

Now the Colts (7-8), already eliminated from the playoffs, may have found their future return specialist. In the first three games since replacing the injured Rogers, Hines returned four punts for 66 yards.

On Sunday, he added 195 yards on three returns — an average of 65.0, shattering a franchise record set by Carl Taseff (148) that stood since October 1956. It also was the highest yardage total by any player in the league since Eddie Drummond (199) in December 2007.

“Fast guys run track," said Hines, a former national champion hurdler who became the first Colts player to score on two punt returns in one game. “But to play football, you have to be fast and you have to be quick on your feet.”

He certainly proved adept at both Sunday.

Hines' breakout game helped Indy snap a four-game losing streak in its home finale and gives the Colts a chance to avoid their second losing season in three years next week at Jacksonville.

Carolina (5-10), meanwhile, lost its seventh straight as rookie quarterback Will Grier made his starting debut. And though the Panthers hoped Grier would help them turn things around, Hines never gave them a chance.

Just eight plays after the 40-yard return gave Indy the ball at the Carolina 36, Jacoby Brissett scored on a 1-yard TD plunge.

Hines made it 14-0 when he fielded the next punt at his 16-yard line, found a lane in the middle of the field, cut left and eluded punter Michael Palardy right in front of the Colts' bench. When he reached the end zone, Hines turned left and jogged through the stadium tunnel.

“Our product doesn't look like that through the week," Panthers interim coach Perry Fewell said. “We have a pattern that we've set for ourselves and it's a pattern we have to break.”

Midway through the fourth quarter, he again managed to snake his way through traffic, found an opening down the sideline and this time sprinted 71 yards past his cheering teammates yet again to make it 31-6.

Grier replaced the turnover-prone Kyle Allen but wasn't much better.

He finished 27 of 44 with 224 yards, no touchdowns and three interceptions. He also was sacked five times and spent a good portion of the game dodging defenders.

“I'm not interested in having the best stats, just trying to do the best thing for our team," Grier said.

Panthers: Christian McCaffrey started the day needing 186 yards receiving to become the third player in league history to have 1,000 yards rushing and receiving in the same season. He wound up with 15 catches for 119 yards, leaving him 67 yards short of the feat. He also had 13 carries for 54 yards. ... The Panthers were just four of 14 on third downs. ... Receiver DJ Moore left in the first quarter and did not return after entering the concussion protocol.

Colts: Marlon Mack rushed 16 times for 95 yards and one score and topped the 1,000-yard mark for the first time. ... Jordan Wilkins had nine carries for 84 yards and a score. ... Brissett was 14 of 27 with 119 yards passing. ... Linebacker Anthony Walker had 10 tackles, one sack and one interception. ... The team's two Pro Bowl selections, left guard Quenton Nelson and linebacker Darius Leonard, both left in the third quarter to be evaluated for concussions. Leonard returned. Nelson did not.

The ruling came after a booth review. Butler compounded the problem with an angry glare from the bench as the replay officials viewed the play and then making an obscene gesture at the crowd while being escorted away amid a crescendo of boos.

Colts: Head to Jacksonville next Sunday for their season finale.