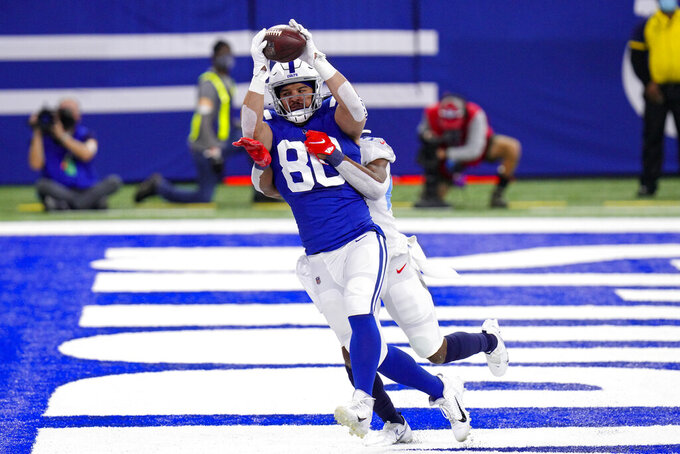 His philosophy really has been put to the test this year.

Whether it's been COVID-19 curveballs; an early rash of debilitating injuries; the struggle to get players in sync because of a truncated offseason; or Monday's announcement that punter Rigoberto Sanchez is about to have surgery to remove a cancerous tumor, it's been tough.

Now, with five games remaining, the Colts need to focus on playing with more consistency.

“One thing we talked about in the locker room was when we play our style of football, when we play the way we know we can play, we’ve proven that we can stop anybody," Reich said after Sunday's 45-26 thrashing that gave Tennessee sole possession of the AFC South lead. “But just doing it for 30 minutes is not good enough. We have to do it for 60 minutes.”

The Colts (7-4) simply have not excelled at being themselves.

Reich makes no secret of his desire to run first, a smart strategy given that he has one of the league's top offensive lines. But Indy ranks 22nd in yards rushing after finishing seventh last season, and its tied for 30th in yards per carry (3.7).

Statistically, the Colts' defense has been one of the league's best most of this season though lately it has only been at its best about half the time.

Three weeks ago, against Baltimore, it completely shut down reigning MVP Lamar Jackson — for a half. Then the Ravens played keep away and rallied for a 24-10 victory.

In Week 11, it was the reverse. After the Packers took a 28-14 halftime lead, the Colts' staunch defense returned and nearly pitched a second-half shutout as Indy rallied for a 34-31 overtime win that appeared to affirm its status as a solid playoff team.

But it happened again Sunday when Derrick Henry ran for 140 yards and three TDs to stake Tennessee to a 35-14 halftime lead. Indy never recovered and it's left players and coaches frustrated.

“It seems like defensively we're coming out, we wait until we get hit in the mouth to start playing," Pro Bowl linebacker Darius Leonard said. “We can't do that. If we want to be a good team, we can't do that, and against a good team you definitely can't do that."

And time is quickly running out for a team that has missed the playoffs four of the last five years. They need a solution, and fast.

QB Philip Rivers. The 38-year-old quarterback is playing well. He's completing 67.3% of his throws, the third-highest percentage of his career. And in the last six games, he's thrown 12 TD passes, four interceptions and flirted with or topped the 300-yard mark four times.

The improvised run defense. How much difference can one player make? If it's DeForest Buckner, a lot. With the Pro Bowl defensive tackle, the Colts fared well against the league's top runners. In their first game without him, Indy gave up 229 yards and four TDs on the ground.

WR T.Y. Hilton. Just when it seemed the four-time Pro Bowler was becoming an afterthought, he re-emerged Sunday with four catches for 81 yards and his first TD of the season. It could be the start of a big finish.

TE Jack Doyle. The two-time Pro Bowler looked like he might be headed toward another big season in training camp — then Trey Burton made it back onto the field. Rivers threw only one pass in Doyle's direction Sunday and it was incomplete.

Sanchez delivered the news Monday on his Instagram post. Reich said the Colts are optimistic about Sanchez's recovery and return to football, though he didn't have a timetable. Reich said longtime left tackle Anthony Costanzo has a sprained medial collateral ligament in his knee and safety Khari Willis (back and quad) and running back Jordan Wilkins also are banged up. He wouldn't say if any of them would play this week. Reich also wouldn't say whether Buckner or DE Denico Autry would return from the reserve/COVID-19 list this week. He did say RB Jonathan Taylor was put on the list because he was considered a “close contact," making him eligible to return later this week.

6.6 — It wasn't just Henry's numbers — 27 carries, 178 yards and three TDs — that were problematic. His style was, too. He ran through and around defenders for 6.6 yards per carry.

With four losses, the Colts can't afford many more if they want to make the playoffs. It makes a win next weekend at Houston essential.