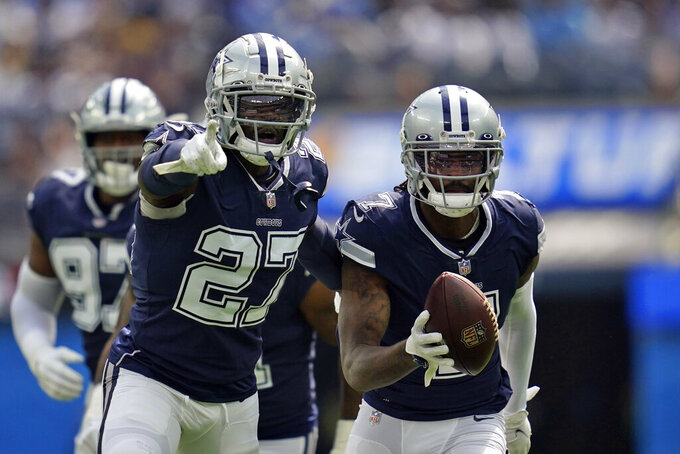 Dallas Cowboys cornerback Tevon Diggs, right, runs back with an intercepted pass next to safety Jayron Kearse (27) during the first half of an NFL football game against the Los Angeles Chargers Sunday, Sept. 19, 2021, in Inglewood, Calif. (AP Photo/Ashley Landis )

FRISCO, Texas (AP) — The role for versatile rookie Micah Parsons in the Dallas defense just got a little more intriguing after the linebacker essentially replaced injured star pass rusher DeMarcus Lawrence in a 20-17 win over the Los Angeles Chargers.

While the Chargers cost themselves two touchdowns with penalties, there was no denying the impact of Parsons, particularly when matched up against right tackle Storm Norton.

Parsons' first career sack came on a generous call by officials who ruled quarterback Justin Herbert was in his grasp when he threw a pass while backpedaling. Regardless, the 18-yard sack ultimately forced the Chargers to settle for a tying field goal.

That fourth-quarter possession ended up being the last for L.A. as Dak Prescott led a drive to a game-ending field goal for his first victory since the star quarterback's severe ankle injury last October. Dallas earned an encouraging split of two road games to start the season.

Parsons' role in new defensive coordinator Dan Quinn's adjusted plan without Lawrence and fellow starter Randy Gregory was the talk of the locker room after the win. The former Penn State player said it was his most work on the defensive line since high school.

“I mean, a lot of it was natural,” Parsons said. “Some people had a long day out there.”

When coming off the left side, Parsons had little trouble getting around Norton. He played 39 of 71 snaps, rushing Herbert on most of them — sometimes even in a three-point stance — and finishing with the sack, a tackle for loss and a game-high four QB hits.

Lawrence is likely sidelined until November after breaking his foot in practice Wednesday, which forced the midweek adjustment with Parsons. If Gregory returns from the COVID-19 list for next Monday's home opener against Philadelphia, the intrigue with Parsons grows.

“I’m just showing them different versatilities of what I can do,” Parsons said. “We go into the playbook even more. I think my teammates and Coach Q put an unbelievable amount of faith in me.”

The Cowboys got the running game going after largely ignoring it in the opener, a 31-29 loss to defending Super Bowl champion Tampa Bay and its top-ranked run defense from the title season. Tony Pollard had his third career 100-yard game with 109 while two-time rushing champ Ezekiel Elliott had 71.

The 198 yards rushing were the most for the Cowboys under second-year coach Mike McCarthy, and they came a week after Prescott threw more than 50 passes for the third consecutive time in a full game and finished with 403 yards passing. Prescott was 23 of 27 for 237 yards against the Chargers.

“We're trying to build this thing to win a championship,” McCarthy said. “You have to have diversity and you have to have an understanding of what your opponents can and can't do.”

Clock management was a problem in the final minute. Dallas had plenty of time to get closer than the 56-yarder Greg Zuerlein made for the win. The Cowboys ran just one play in the final 33 seconds, choosing not to snap with about 10 seconds left and using their last timeout with 4 seconds to go. McCarthy said part of the problem was the scoreboard clock he was using went blank after that only play, a 3-yard run by Pollard.

RT Terence Steele helped slow three-time Pro Bowl pass rusher Joey Bosa in the first game without La'el Collins, who is serving a five-game suspension for violating the NFL's substance-abuse policy. Steele got plenty of experience as an undrafted rookie last year when Collins missed the entire season with hip issues. That was part of the reason Dallas chose him to fill in this time. The plan probably won't change anytime soon after Bosa was shut out on sacks, tackles for loss and QB hits.

Special teams coach John Fassel continues to make puzzling decisions. The latest was a heavy punt rush late in the first half that resulted in a roughing penalty, giving the Chargers a chance for a tying field goal in the final seconds before halftime. Tristan Vizcaino missed it. Without the penalty, the Dallas offense would have had plenty of time to try to expand a 14-11 lead.

WR Amari Cooper has a rib injury, DT Carlos Watkins sprained a knee and DE Dorance Armstrong injured an ankle. There were no updates on their conditions Monday.

The Cowboys get a rare three-game homestand starting next Monday night against Philadelphia. They should be favored in all three, although it'll be close with the middle game against Carolina because of the early resurgence from the Panthers. The hapless New York Giants, another NFC East rival, finish the set.