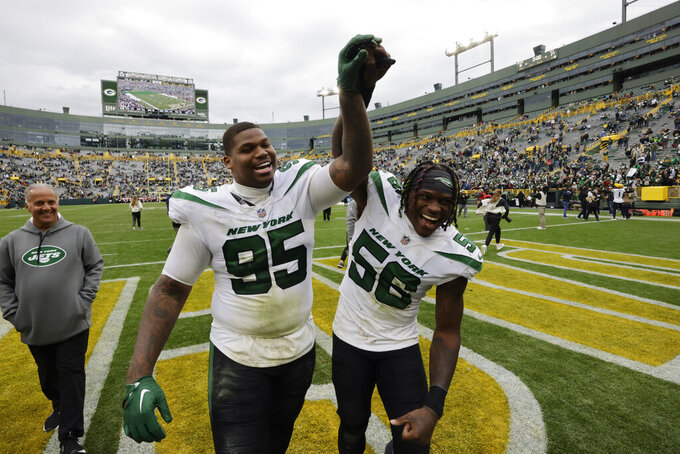 DENVER (AP) — Buried in the bewilderment over Russell Wilson's dreadful start to his Broncos career is Denver's dominant defense, which is allowing just 15.3 points per game.

“The defense is playing at such a high level and they are battling nonstop,” marveled Denver's rookie coach Nathaniel Hackett, who is pinning a turnaround on Ejiro Evero's unit that is ranked second in the league in yards allowed and fourth in sacks.

“The D-coordinator is doing a phenomenal job, but remember this system was installed almost four years ago with Vic (Fangio),” said Jets coach Robert Saleh, whose resurgent team visits Denver on Sunday. "They’ve done a great job adding their flavor to it. They’re so precise, so fast, relentless.

“It’s as good of a defense as we’ll see all year,” Saleh added. "I’ll probably say that a couple more times here in a few weeks, but these guys are legit. They’re hard to move the ball on.”

The problem in Denver is Hackett's offense, which is averaging an NFL-low 14.8 points per game, leading to a three-game skid that includes consecutive overtime losses.

Wilson is struggling with his reads and rhythm — and with staying healthy. The O-line is allowing consistent pressure, particularly up the middle, and the receivers keep rounding off their routes and dropping passes.

The Broncos (2-4) have a whopping 19 three-and-outs in their past four games. Three of those matchups were in prime time, leading to a national piling on of Wilson, whose five TD passes and 20 sacks have him on pace for career worsts in both categories.

Wilson also is dealing with a pulled hamstring to go with a strained muscle near his throwing shoulder. So, the Broncos might have to turn to backup Brett Rypien, whose only career start was a 37-28 win over the Jets two years ago.

Either way, they'll catch no break from the Jets (4-2) and their wrecking ball defensive line led by Quinnen Williams.

“We like our D-line matching up, from an advantage standpoint, versus anybody,” said Saleh, whose team has already matched last year's win total. “Whether that’s cocky or unguided confidence, whatever it is, we love our D-line. We think they’re a rolling ball of butcher knives and there’s a lot of them that can play at a high level.”

The Jets know if they can keep games close going into the fourth quarter, they’ve got a good chance to win. New York has outscored opponents 68-20 in the final 15 minutes of games, the largest scoring margin in that period in the NFL. The 68 points in the fourth also lead the league.

“Guys are flying around, playing all the way to the last snap,” QB Zach Wilson said.

Singleton wouldn't normally keep track of his tackles, but he said Josey (Jewell) kept joshing with him on the sideline about all the plays he was making.

“I was just kind of in the moment and when you're getting off the field, even if you made two tackles on the series, it doesn't seem like they're stacking up like that," Singleton said.

CB Sauce Gardner and RB Breece Hall have provided the Jets with immediate boosts as rookies. Gardner, the No. 4 overall pick in April, has been frustrating wide receivers with his excellent coverage. He has allowed one catch for 6 yards in 40 coverage snaps in man coverage.

Hall, a second-rounder, was the first running back selected after the Jets traded up three spots to get him. He has 391 yards rushing to lead New York and is second only to Houston’s Dameon Pierce (419) among rookies.

Hackett announced early in the week that running back Melvin Gordon would start against the Jets as he has in the two games since Javonte Williams sustained a season-ending knee injury against the Raiders on Oct. 2. That surprised a lot of people because a benched Gordon appeared disengaged on the sideline as Latavius Murray averaged 4.4 yards a carry in his Denver debut last week. And a day later, Gordon retweeted a bunch of suggestions that the Broncos trade him.

New York opened as 3-point underdogs, according to FanDuel, at Denver and dropped to just 1 point later in the week. The Jets are comfortable not being favorites as they joined the 2001 Cleveland Browns as the only teams in the Super Bowl era to have a winning record despite being an underdog in each of its first six games.

Zach Wilson said the Jets are “absolutely” proving they’re better than most people expected. “But the season is still so long and we can’t feel like we have arrived or anything now. “We have to keep going. We have to keep getting better. We have to learn from these wins.”