Jets' Crowder still recovering from COVID, out vs Panthers 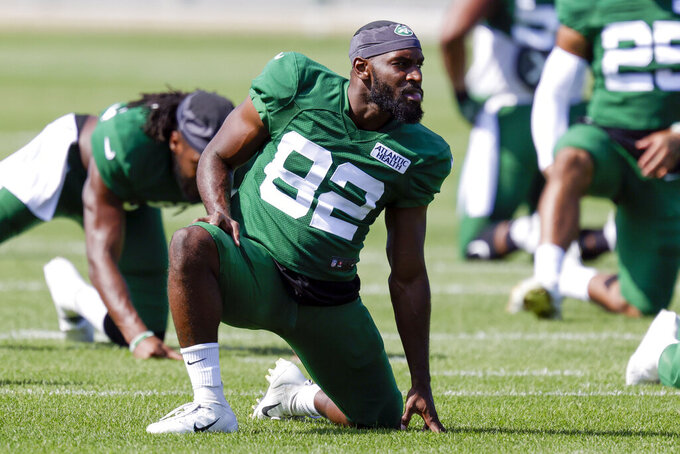 Crowder, who led the Jets in receptions the last two seasons, was placed on the COVID-19 list last Friday after testing positive for the coronavirus. Crowder is vaccinated, but is still working through symptoms.

Per NFL protocols, vaccinated players are allowed to return to the team if they have two negative tests 24 hours apart.

Coach Robert Saleh ruled Crowder out Friday for the game against the Panthers.

Fellow wide receiver Keelan Cole is uncertain to play after injuring a knee during practice Thursday. He was listed as questionable after not practicing Friday.

“It's going to go down to the wire,” Saleh said.

Safety Sharrod Neasman was ruled out for the game after not practicing all week with a hamstring injury.

The Jets have starters Marcus Maye and Lamarcus Joyner at safety, along with Sheldrick Redwine. Saleh said there's a chance New York will elevate a safety — possibly Adrian Colbert or Jarrod Wilson — from the practice squad.

Running back La'Mical Perine is questionable for the game with a foot injury, but was a full participant at practice Friday after being limited Wednesday and Thursday.

NOTES: LT Mekhi Becton was a full participant for the third straight day after clearing the NFL's concussion protocol. He struggled during several training camp practices and offensive coordinator Mike LaFleur said a few weeks ago that last year's first-round pick was “going through some things.” Becton also missed some practices while dealing with his head injury. While Becton said he could've performed better this summer, he acknowledged the comments by LaFleur “confused” him. Becton also said he never approached LaFleur to talk about the comments. ... Saleh made a noticeable wardrobe change Friday, audibling from his usual Jets gear and instead wearing a Passaic County Technical Institute T-shirt. It was to recognize the Lady Bulldogs winning the first varsity Jets/Nike Girls High School Flag Football League championship in New Jersey history in June. Saleh will recognize a local high school team each week during his Friday news conferences. ... The Jets signed former Alabama OL Ross Pierschbacher to the practice squad. Pierschbacher was a fifth-round pick of Washington in 2019 and most recently spent time with Philadelphia.