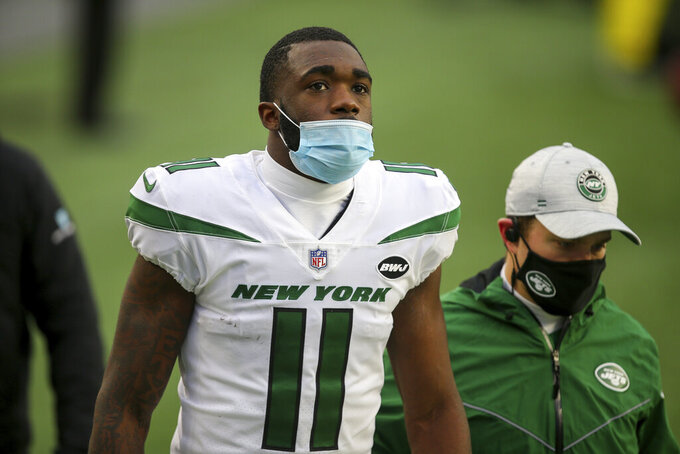 FILE - New York Jets wide receiver Denzel Mims (11) walks to the locker room after an injury during an NFL football game against the New England Patriots in Foxborough, Mass., in this Sunday, Jan. 3, 2021, file photo. Mims is done with salmon. The Jets wide receiver doesn't want to eat, touch or look at it ever again. Not after a bout with food poisoning in the spring caused him to drop 20 pounds — and miss some valuable time on the football field. “It took a big toll on me,” Mims said after practice Wednesday, Aug. 11, 2021.(AP Photo/Stew Milne, File)

The New York Jets wide receiver doesn't want to eat, touch or look at it ever again. Not after a bout with food poisoning in the spring caused him to drop 20 pounds — and miss some valuable time on the football field.

“It took a big toll on me,” Mims said after practice Wednesday.

After an up-and-down rookie year during which he dealt with a few hamstring injuries, Mims headed into this past offseason focused on being a lot better in 2021. He had 23 catches for 357 yards and no scores in nine games, but showed flashes of being the playmaker that made him a second-round pick out of Baylor.

But the Jets made a coaching change in the offseason and out went that system. In came new offensive coordinator Mike LaFleur's West Coast-style scheme and a new quarterback in first-rounder Zach Wilson. New York also signed Corey Davis in free agency and drafted Elijah Moore in the second round. Suddenly, Mims' role appeared uncertain.

And then came that unfortunate meal.

Mims went from 217 pounds to 197, sapping his energy in the process. He didn't participate in organized team activities because of it, and some offseason drills. And that left him trying to play catchup when he got healthy again.

“It set me back a lot, you know, because those guys were out there practicing every day and out there every day,” Mims said. “And I was dealing with an illness, so I wasn’t out there every day. So I’m trying to do everything I can to make sure I bounce back and catch up to where they’re at so come Week 1, I’ll be ready to go.”

Mims said he feels “good” right now and the 6-foot-3 receiver is back up to 208 pounds, so he has regained a little more than half the weight. He's not worried about putting the rest of it on. He's more concerned about being on the field.

While Moore has been one of the stars of training camp and Davis has quickly developed a rapport with Wilson, Mims has become somewhat of a forgotten man. Veteran Jamison Crowder is still expected to have a big role, and free agent signing Keelan Cole has seen lots of snaps. Braxton Berrios remains on the roster and has special teams value, as do Vyncint Smith and Jeff Smith.

So that has some wondering if Mims could possibly — after just one season — be on the roster bubble.

“No, absolutely not," coach Robert Saleh insisted. “There isn’t a player in this organization that anyone is ready to give up on. We’re in the second week of camp, so they haven’t even gotten a chance to go against another roster yet.”

That comes Saturday night when the Jets kick off the preseason against the Giants.

“You’ve got to battle each and every day because you slack and someone else can come take your spot,” Mims said. “Worrying? No. I’ve just got to focus on my job and just continue to be myself and focus on my craft so I can get better. Because if you worry, you’re just worrying about that, and you’re not going to get any better.”

Mims was among a group of players that worked out in Florida with Wilson during the offseason, trying to build chemistry. During camp, he has made a point of catching passes from the quarterbacks before and after practice, and even during drills when he's not on the field.

Saleh laughed when he was asked Tuesday about Mims practicing with the starters. He knew the questions would come after Mims had been working mostly with the backups the first two weeks of camp.

“He’s working his tail off and the harder he works the more he puts in, the more opportunities he’s going to get,” Saleh said. “He’s part of the rotation.”

On Wednesday, Mims made a nice over-the-shoulder, fingertip catch on a pass from Mike White that prompted some loud cheers from fans in the stands at practice.

“I feel like they are behind me,” he said. “You know, they always show me love when they see me. And I greatly appreciate that.”

It was almost a reminder to the fans — and Mims — that, yes, he's still here. And, yes, he plans on being a factor in this offense.

As long as he stays away from the fish.

“I feel like I’m caught up,” Mims said. “I mean, of course, there's a lot I can learn in the system that they want. But, you know, I feel like I’m catching up and I’m almost there. I've just got to keep grinding each and every day.”

NOTES: Saleh said he and the coaches are still determining how long the starters will play in the preseason opener Saturday night. Wilson is expected to play at least through the first quarter. ... DL Quinnen Williams (foot), LG Alijah Vera-Tucker (pectoral), CB Isaiah Dunn (knee) and DL Ronnie Blair (hamstring) were among those who didn't practice.