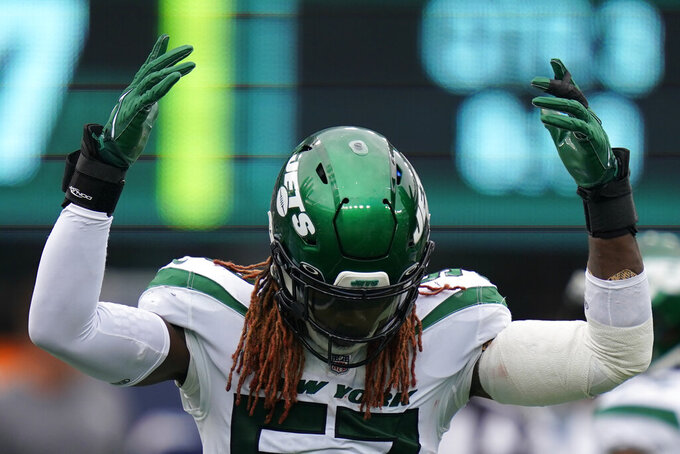 FLORHAM PARK, N.J. (AP) — C.J. Mosley spotted something in Tennessee's offense he didn't like, so he did something on the field that's usually a total no-no for the New York Jets.

He changed the defensive alignment.

And, sure enough, it resulted in a big play last Sunday.

“He did something we’ve never had a linebacker do in our system,” coach Robert Saleh said with a smile. “It was a sack, and if you listen to the TV copy and you guys see him, he's demonstrative and it looks like he’s making a play call, like he’s changing the defense — which he is, which we don’t do. Once a call goes in and we’re rolling.”

Saleh and some other defensive coaches shouted at linebackers coach Mike Rutenberg: "What is he doing?”

Mosley was being who he has always been: a quarterback on defense.

“He got us into the perfect play call, and we got a sack because the quarterback hitched,” Saleh said of the play during the Jets' 27-24 overtime win. “And I was like, ‘Well, that’s why he’s an All-Pro.’ So, good job, C.J.”

The 29-year-old Mosley missed all but two games in his first two seasons with the Jets — including opting out last year due to the coronavirus pandemic. That left many wondering if the middle linebacker would be close to the same player he was for five seasons in Baltimore, where he was a four-time Pro Bowl selection and four-time second-team All-Pro.

But Mosley remade his body, refocused and is clearly rejuvenated. Through four games, Mosley has been every bit the playmaker he once was, leading the Jets with 37 tackles to go with a sack, a tackle for loss, a quarterback hit and a pass defensed.

“He's as locked in as I've ever seen a player,” defensive lineman Sheldon Rankins said.

Mosley came to the Jets in 2019 as a big-splash free agent, signing a five-year, $85 million deal. A groin injury limited him to two games and then the pandemic put him on the sideline a year ago. A coaching change came in the offseason, and so did a new system under Saleh and defensive coordinator Jeff Ulbrich — with some chatter that perhaps Mosley wasn't an ideal fit.

But he turned himself into exactly the right fit.

He slimmed down from 250 pounds to 231 to be more mobile, and the results are showing each week.

“I try to play fast, try to be a leader, try to lead by example,” Mosley said recently. “So, I mean, that’s not really a surprise to me or people that know my type of game. But it’s been two years and I finally put some new stuff on tape.”

Like that defensive call in the fourth quarter against Tennessee.

“Whatever C.J. says in the line of war is what goes,” Rankins said. “Like coach said, it may be a chalkboard no-no, like you're not supposed to do that. But at the end of the day, if that's what our captain says, we're going to do it and we were able to execute it.”

Rankins spent his first five NFL seasons in New Orleans and compared Mosley's leadership and playmaking abilities to that of his former Saints teammate Demario Davis, who also is a former Jet.

“C.J. is really operating on that type of level,” Rankins said. “It’s pretty special to watch. I mean, he’s been out of ball essentially for the last couple of years, and to see him step back in and literally not miss a beat. ... I mean, he’s come in and every game you’re able to see him do things that the normal human just can’t do.”

Just because it worked doesn't necessarily mean Saleh will give Mosley more freedom to change alignments moving forward. But the fact the linebacker took it upon himself to change it — despite the “chalkboard rule” — told Saleh and Mosley's teammates plenty about his mental approach.

“He got to taste a little bit of what coaching is,” Saleh said. "He made a check, it worked, you’re a genius. If it wouldn’t have worked, we wouldn’t be talking about this, I wouldn’t tell you guys about it — but it would’ve been one of those, ‘Hey dude, you can’t do that.’ But it worked.

“It shows that he's like a cheat code. His mind plays at a different level, he’s playing a different game. And he knew exactly what we needed to get into, and he made the right call.”

NOTES: Rookie WR Elijah Moore was limited as he works through the concussion protocol, but is expected to be fully cleared Thursday and play against Atlanta in London on Sunday. ... WR Denzel Mims sat out practice with a non-COVID-19 illness. He came to meetings, didn't feel well and was sent home. ... S Adrian Colbert (concussion), CB Brandin Echols (concussion), TE Tyler Kroft (back), S Marcus Maye (ankle), DL Nathan Shepherd (knee) and WR Jeff Smith (concussion) also didn't practice. ... LB Blake Cashman returned to practice after missing the past three games while on IR with a hamstring injury. ... DB Natrell Jamerson was signed to the practice squad. He has had several NFL stops, most recently with the Saints. ... Saleh said rookie LB Hamsah Nasirildeen, placed Tuesday on IR with an undisclosed injury, will be sidelined three weeks.